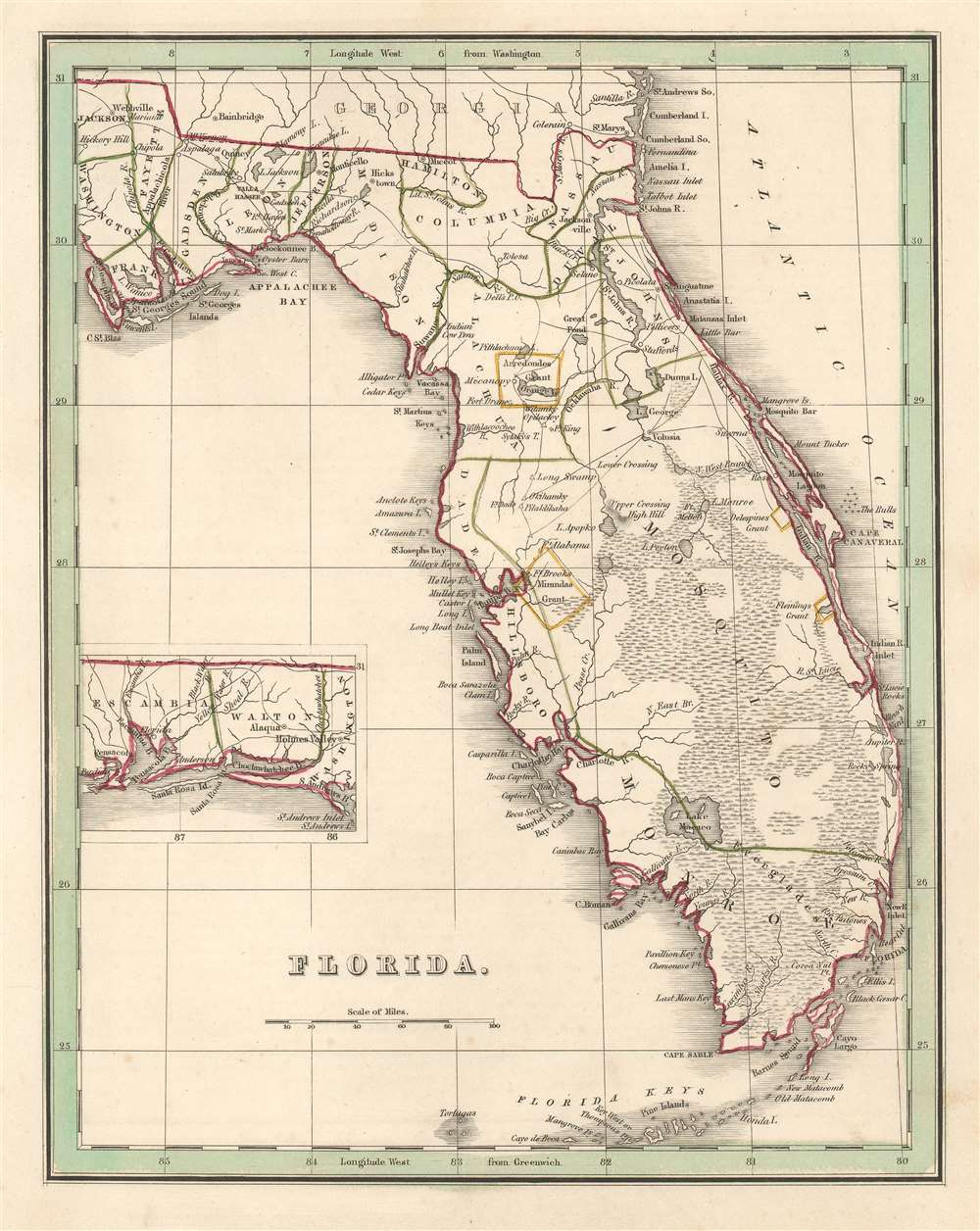 An early map of Florida just before the Second Seminole War.

This is a scarce 1835 T. G. Bradford map of Florida. The map depicts Florida as it appeared at the outset of the Second Seminole War (1835 - 1842) from Georgia to the Florida Keys and from St. Joseph's Bay to the Atlantic Ocean, with an inset map situated along the left border illustrating western Florida from Perdido Bay to St. Andrews Bay. An early Florida county structure is presented with Mosquito County occupying most of eastern Florida. Cities and towns throughout Florida are labeled, including Jacksonville and Tallahassee, while forts and Indian villages are identified in Central and Southern Florida.

Bradford identifies two land grants, Arredondo's Grant and Miranda's Grant, are holdovers from Spanish Florida. Beginning in the 1790s, the Spanish crown offered land grants to people courageous enough to emigrate to Florida or for meritorious service to the crown. Arredondo's grant, named after Fernando de la Maza Arredondo, is located to the west of St. Augustine in Alachua county. It was granted to Arredondo in 1817 by Alexander Ramirez of Havana. Miranda's Grant, after Pedro Miranda, a Spanish sailor, is in the vicinity of modern-day Tampa. After Florida became a possession of the United States in 1821, these grants became a point of contention between the United States government and the grantees. Initially, the U.S. government declared that it would honor the grants as long as the owner could prove their legitimacy. Both Pedro Miranda and Fernando de la Maza Arredondo took their cases to the United States Supreme Court, where their rights to the land were affirmed. Eventually, nonetheless, both grants were dissolved by U.S. courts on the basis that they were not properly developed and therefore forfeited.

This map was created by Thomas G. Bradford and engraved by George Washington Boynton for publication in the 1835 edition of Bradford's Comprehensive Atlas Geographical, Historical and Commercial.

Bradford, T. G., A Comprehensive Atlas Geographical, Historical and Commercial (Boston), 1835.     Comprehensive Atlas Geographical, Historical and Commercial. Bradford published this atlas in several editions and with various partners. The first edition, 1835, was published by William D. Ticktor and did not contain the iconic Republic of Texas map (although we have in fact seen Ticktor examples with a Texas map, suggesting, against conventional wisdom, that there may have been two Ticktor editions). The second official edition, published in the same year by the American Stationers Company, was the first to contain the Republic of Texas map, which is based on Austin's map, with two pages of descriptive text. A third edition was issued in 1836, also by American Stationers (though still dated 1835), and contained an unaltered Republic of Texas map with only a single page of descriptive text. In this and all subsequent editions the Florida map was also enlarged. A fourth edition appeared later, possibly 1837, and included an updated and revised map of Texas that replaces the old Mexican land grants with new inchoate counties. Rumsey has an 1838 edition, which he identifies as the 3rd, but its probably the 5th.