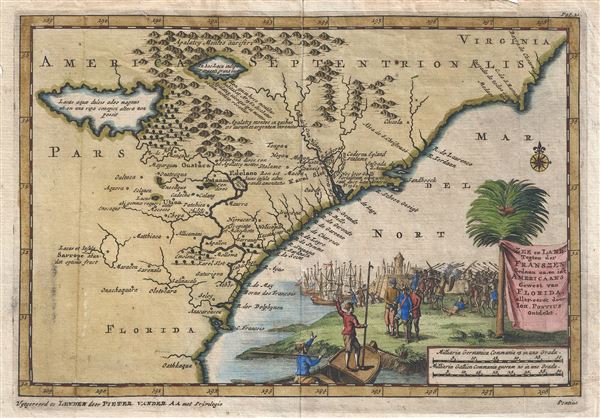 A lovely early decorative map of the American southeast.

There are three lakes of note in the upper left quadrant, one labeled 'Lacus acuqe dulcis,' a second identified as 'Apalatcy' and a third further south identified as Sarrope. All three of these lakes make their first appearance on the De Bry / Le Moyne map of 1591. The largest of these is represented as the source of the River May. In that chart Le Moyne correctly mapped the River May (St. John's River, Florida) in an inverted 'V' form, first heading north, then south to meet with a large inland lake (in all likely hood Lake George or one of the other great inland lakes of Florida). Hondius on the other hand maps the course of the May heading to the northwest, thus relocating the 'Lacus Aquae Dulcis' far to the north. This error can be understood in terms of magnetic variation, temperature issues associated with isothermal lines, and navigational errors related to the confusion of the star Asfick with Polaris. While Le Moyne correctly located the mouth of the River May at 30 degrees of latitude, Hondius maps it between 31 and 32 degrees. This led to a misassociation of the River May with the Savannah River. Thus, while the real River May dips southward, the Savannah River heads almost directly NW into the Appellation Mountains, forming the modern southern border of South Carolina. Hondius, no doubt taking his cue from navigators who rarely trekked inland, therefore rerouted the May River to flow from the northwest. Without an accurate picture if the interior, Hondius followed Le Moyne's example and translocated the great freshwater lake to the north. Others have speculated that the Le Moyne's River May is in fact the St. John's River, and that the 'Lacus Aquae Dulcis' is in fact the Okefenokee Swamp - however, this argument runs counter most scholarship. The influence of the Mercator-Hondius firm was so pronounced in Europe that most subsequent cartographers, including as we see her Van der Aa, followed their lead.

The map features a large decorative title cartouche in the lower right quadrant illustrating a pitched battle between American Indian and French Colonists. A large stone fort, far grander than the short lived Charlefort could ever have been, and a bustling harbor appears in the background, while in the foreground a prisoner is loaded onto a boat. Of note is the term 'Pontius' appear in the lower right quadrant just outside the printed border of the map - this refers to Ponce de Leon, the Spanish Conquistador who 'discovered' Florida in the early 16th century.

Van der Aa prepared this map for inclusion in volume 16 of his Naaukerige Versameling, published in 1707. The map itself is generally dated on year earlier in accordance with textual annotation found in the book itself. Several subsequent states followed, including a 1709 edition and a highly decorative 1714 edition. The present example represents the first edition, first state.