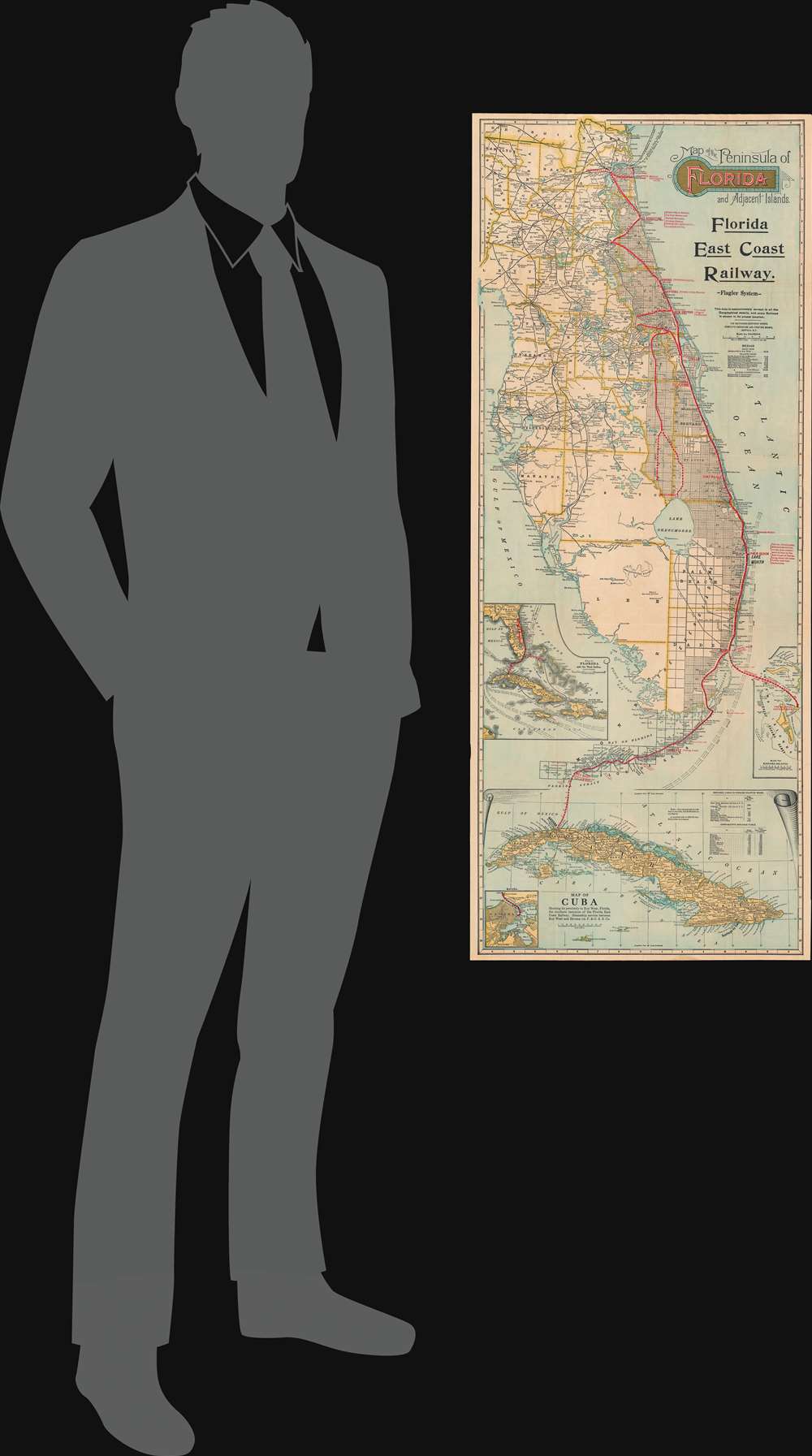 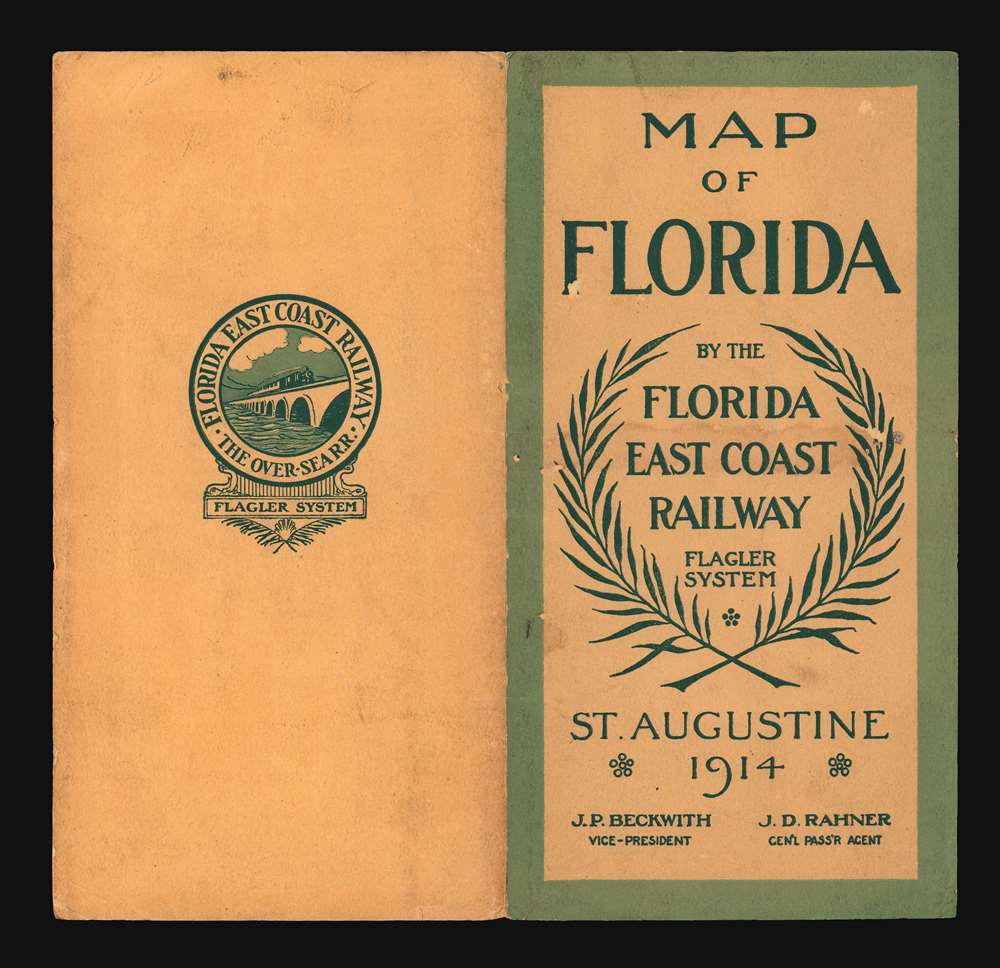 A highly decorative 1914 map of Peninsular Florida issued by the Mathews-Northrup Company for the Henry Morrison Flagler’s (1830 – 1913) Florida East Coast Railway. The map covers from the Georgia Border to Key West and Cuba, and from Cedar Key to the Bahamas. The route of the railroad is illustrated in red overprinting extending from Jacksonville to Key West, with major stops, and the grand hotels available there, including the Royal Palm, the Breakers, the Ponce de Leon, and the Ormond, noted. The map also identifies drainage canals from Lake Okeechobee constructed by J. O. Wright to grade the Everglades.

The Florida East Coast Railway was a major force in the development of Eastern Florida in the late 19th and early 20th century. Spearheaded by the industrialist Henry Flagler (1830 - 1913), the Florida East Coast Railway fulfilled a vision dating back at least to the 1870s. Before Flagler, Florida south of Jacksonville was serviced by only a few rickety railroads unconnected to one another. Most access to Florida cities was limited to ferry and steamer services. Flagler bought up most of the failing existing railroads, upgraded them, and connected them with new lines, formally consolidating the network first as the 'Jacksonville, St. Augustine, and Indian River Railway', and then, on September 9, of 1895, as the 'Florida East Coast Railway'.

The railroad reached New Smyrna in 1892, Cocoa in 1893, Palm Beach in 1894, and Miami in 1896. Flagler constructed sumptuous resorts and founded cities all along the route, among them The Ormond, the Royal Palm, the Royal Poinciana, the Continental, and more. Combined with his railroads, and the Peninsular and Occidental Steamship Company (P. and O. S.S.), Flagler commanded a resort empire spanning the entire east cost of the Florida peninsula

The extension to Key West, possibly the greatest Railroad achievement of the era, was planned from about 1895, but not completed until 1912. It operated for little more than 20 years, heralding a golden age for the Key West and the Florida Keys in general. Business magnates, presidents, and dignitaries rode the rails to Miami or Key West before embarking with Flagler’s Peninsular and Occidental Steamship Company to Havana, Cuba, and the Bahamas. Long after Flagler’s death, the Labor Day Hurricane of 1935 destroyed some of the railroad bridges leading to Key West (the remains of which can still be seen) and the FEC, then insolvent, was unable to finance the repairs. The tracks were donated to the state, who used the infrastructure to construct the Overseas Highway (U.S. 1).

There are multiple states of this map reflecting the development of the Florida East Coast Railway. The present example is the only representative of this specific state we have been able to identify. The Library of Congress owns the earliest known example, published for the 'Jacksonville, St. Augustine, and Indian River Railway', with the railroad terminating at Palm Beach, and a date of 1893. Rumsey’s example of 1896 sees the name changed to Florida East Coast Railroad, and shows tracks extending as far as Miami, with planned extensions as far as Key West. An example at Yale dating to 1906, shows various proposed extensions, in addition to Key West as well as planned ferry services to Cuba and the Bahamas. The Tampa Bay History Center, Touchton Map Library, owns an example showing the track extending as far as Key West dating to 1913. The present example is a later state, dated on the cover 1914, and includes routes to Cuba operated by Flagler’s Peninsular and Occidental Steamship Company (P. and O. S.S.). A more extensive version was published by the Florida Land Department in 1924, showing all railroads and roads in the peninsula.