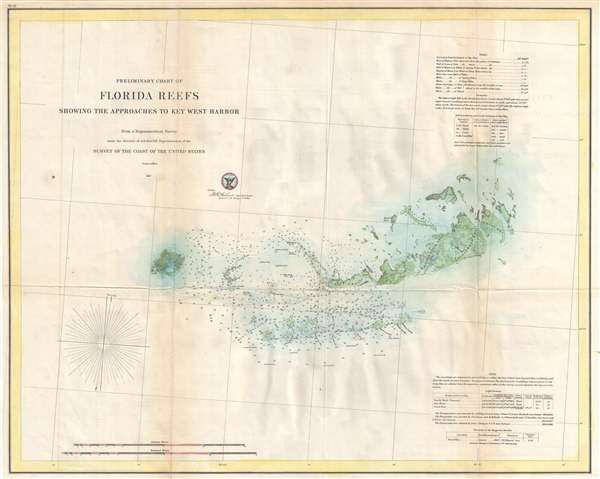 Detailed and attractive map of the Florida Keys and Key West.

This is a hand colored 1857 U.S. Coast Survey chart of the Florida Keys. The map depicts the approaches to Key West harbor from Cudjoe Key and Sugarloaf Key past Key West to Marquesas Keys and from just north of Sugarloaf Key to the West Channel and Sand Key and Rock Key. Numerous depth soundings are given, and are 'expressed in feet to 18 feet, or within the fine dotted lines, beyond them in fathoms'. At the upper right corner, information on tides is presented, as well as a table explaining the various abbreviations used on the map. At the lower left corner is a table with information about lighthouses, which are located at North West Channel, Key West, and Sand Key.

Very good. Wear along original fold lines. Light tranferrance and foxing. Backed on archival tissue for stability.
Looking for a high-resolution scan of this?