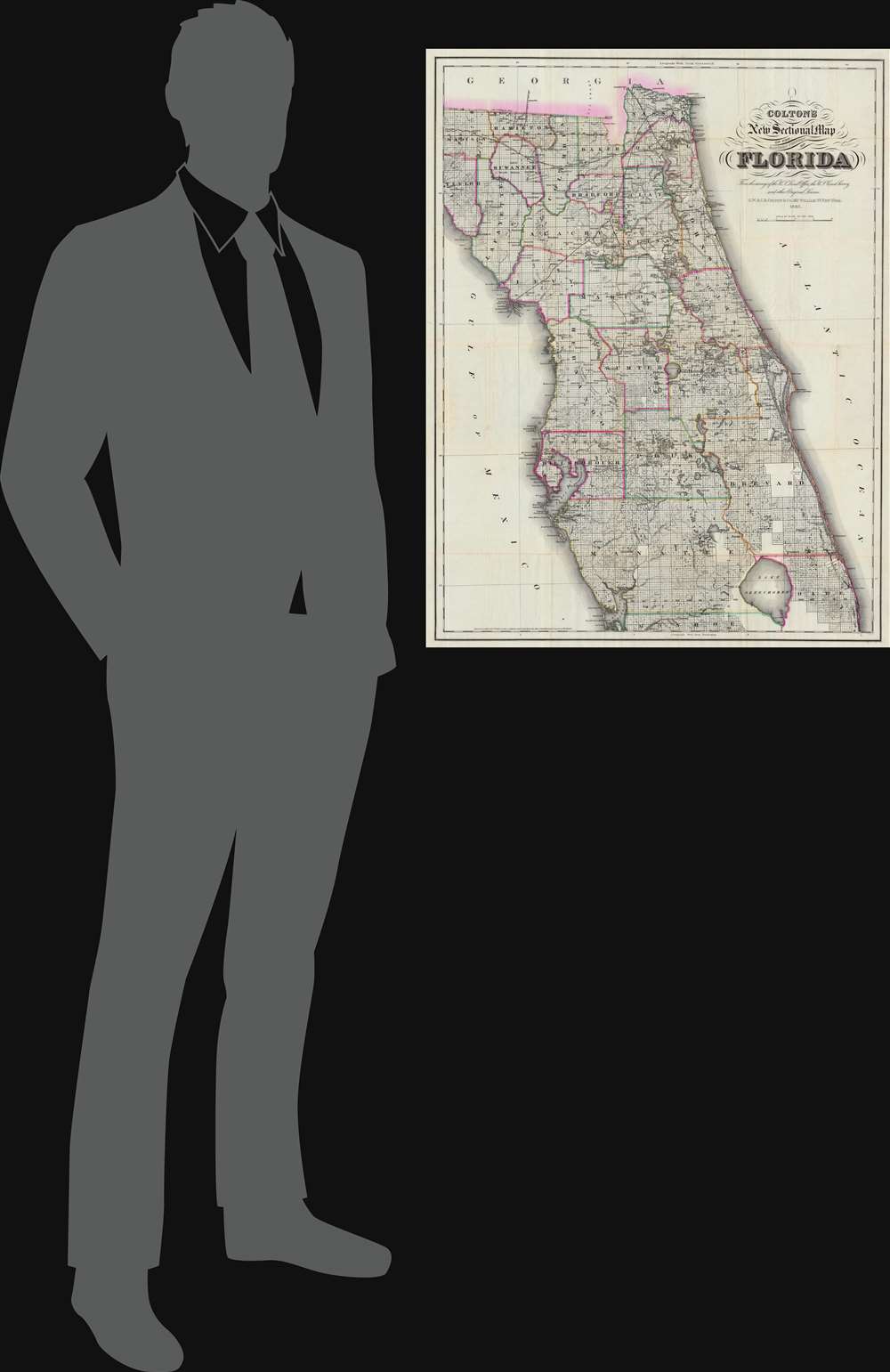 This is a striking large-scale 1882 map of northern and central Florida by G. W. and C. B. Colton - illustrating the most populous part of the state at the outset of the late 19th century Florida Land Boom. The map is derived from Florida Land Office, U.S. Coast Survey, and railroad survey work compiled up to 1882 - making it one of the largest and most detailed maps of central Florida of its generation. The map is further unique for its illustration of vast land grants, some dating to the Spanish era, but others, such as Levy's Jewish settlements, more recent - most of which were locked in litigation throughout the second half of the 19th century.

This map's focus on central Florida underscores the rapid economic, infrastructure, and real-estate development that was then going on. Multiple railroad concessions were granted, including the 'South Florida Railroad' and the 'Atlantic, Gulf and West India Transit Company'. On this map, each of these routes has established tracking connecting the major central Florida lakes, for example connecting Lake Eustis with Lake George, and hence to the navigable St. John's River. Developed lateral routes across the state also connected Jacksonville with Pensacola and Mobile. As of 1881, when this map was first issued, no railroads extended south of Orlando. By the second edition, 1884, the South Florida Railroad reached Tampa.

In the second half of the 19th and throughout the early 20th century, Florida experienced a series of land booms and crashes. The first followed the Second Seminole War (1835 - 1842), when the government offered homesteaders who agreed to stay five years 160 acres of free land. The second - represented on this map - follows the arrival of the railroads to central Florida, leading to nearly 15 years of prosperity and economic growth - mostly revolving around the booming citrus industry. New settlements sprang up throughout the northern half of the state, many owned by absentee investors who never personally visited Florida. The boom collapsed in 1894-95 when a series of historical freezes wiped out the citrus harvest. Property depreciation following the freezes allowed Henry Flagler (1830 - 1913) to develop the Florida East Coast Railway. This, and the arrival of the highway system in the 1920s, led to the third Florida land boom from 1920 to the stock market crash of 1929.

One of the more interesting grants presented here are the massive tracts throughout central Florida assigned to Moses Elias Levy (1782 - 1854). Levy was a Moroccan-born Sephardic Jew, Proto-Zionist, Abolitionist, and pioneer who emigrated to the United States from Mogador, Morocco. He built a fortune in the slave trade before experiencing an epiphany and turning his life towards philanthropic goals, including the establishment of a Jewish settlement in Florida and the gradual abolition of slavery. Levy himself did not receive a Florida grant, instead, in 1819 he purchased the land from his friend, the Spanish-Cuban grantee Alejandro Ramierz. The initial purchase consisted of some 53,000 acres in central Florida on which Levy planned to establish a proto-Zionist 'New Jerusalem.' Later, Levy bought up additional grants throughout central Florida.

In the wake of the Napoleonic Wars (1800 - 1815) European Jews were suffering extreme persecution in Europe, but in the United States they could enjoy rights as full citizens. He imagined his settlement, called the Pilgrimage Plantation, as a utopian haven where European Jews could escape anti-Semitism in a Moshav-like social and political setting. Unfortunately, lacking the vast capital required to develop the sprawling grants, the settlement never really took off. By 1828, only 21 Jews settled on Levy’s land. Pilgrimage Plantation was devastated during the Second Seminole War (1835 - 1842), after which it never recovered, and the notion an exclusively Jewish settlement in Florida was abandoned. Moreover, Levy's properties presupposed United States recognition of Spanish land grants, which the Federal government opposed. Levy was financially devastated by lengthy court battles that ultimately validated nearly 100,000 acres of his Florida grant holdings - but in the end, this was only a small portion of the total land he had amassed. He died in September 1854 and his remaining land holdings passed to heirs before being broken up and sold.

The map notes a host of additional grants, most of which were holdovers from Spanish Florida. These include the Arredondo Grant, Atkinson's Grant, the Fernandez Grant, the Sanchez Grant, the Miranda Grants, Charles Sibbald's grant, and many others. Arredondo's Grant and Miranda's Grant, among the largest, are interesting case studies. Beginning in the 1790s, the Spanish crown offered land grants to people courageous enough to emigrate to Florida or for meritorious service to the crown. The Spanish merchant Fernando de la Maza Arredondo controlled multiple grants, but the largest was located to the west of St. Augustine in Alachua County. It was granted to Arredondo in 1817 by Alejandro Ramirez of Havana. Miranda's Grants, after Pedro Miranda, a Spanish sailor, appear here and there throughout the map. After Florida became a possession of the United States in 1821, these grants developed into a point of contention. Initially, the U.S. government declared it would honor the grants as long as the owner could prove their legitimacy. Both Pedro Miranda and Fernando de la Maza Arredondo took their cases to the United States Supreme Court, where their rights to the land were initially affirmed. Eventually, nonetheless, both grants were dissolved by U.S. courts on the basis that they were not properly developed and therefore forfeited.

This map was issued in 1882 by G. W. and C. B. Colton. It is a lithographic production based upon cartographic work completed by various government land offices, both state and federal, the U.S. Coast Survey, and private railroad surveys. A first edition preceded the present edition in 1881, with subsequent editions in 1883, 1884, and 1886. The 1886 edition had an additional map of the Florida panhandle and south Florida appended. The map is well represented institutionally but scarce on the market.