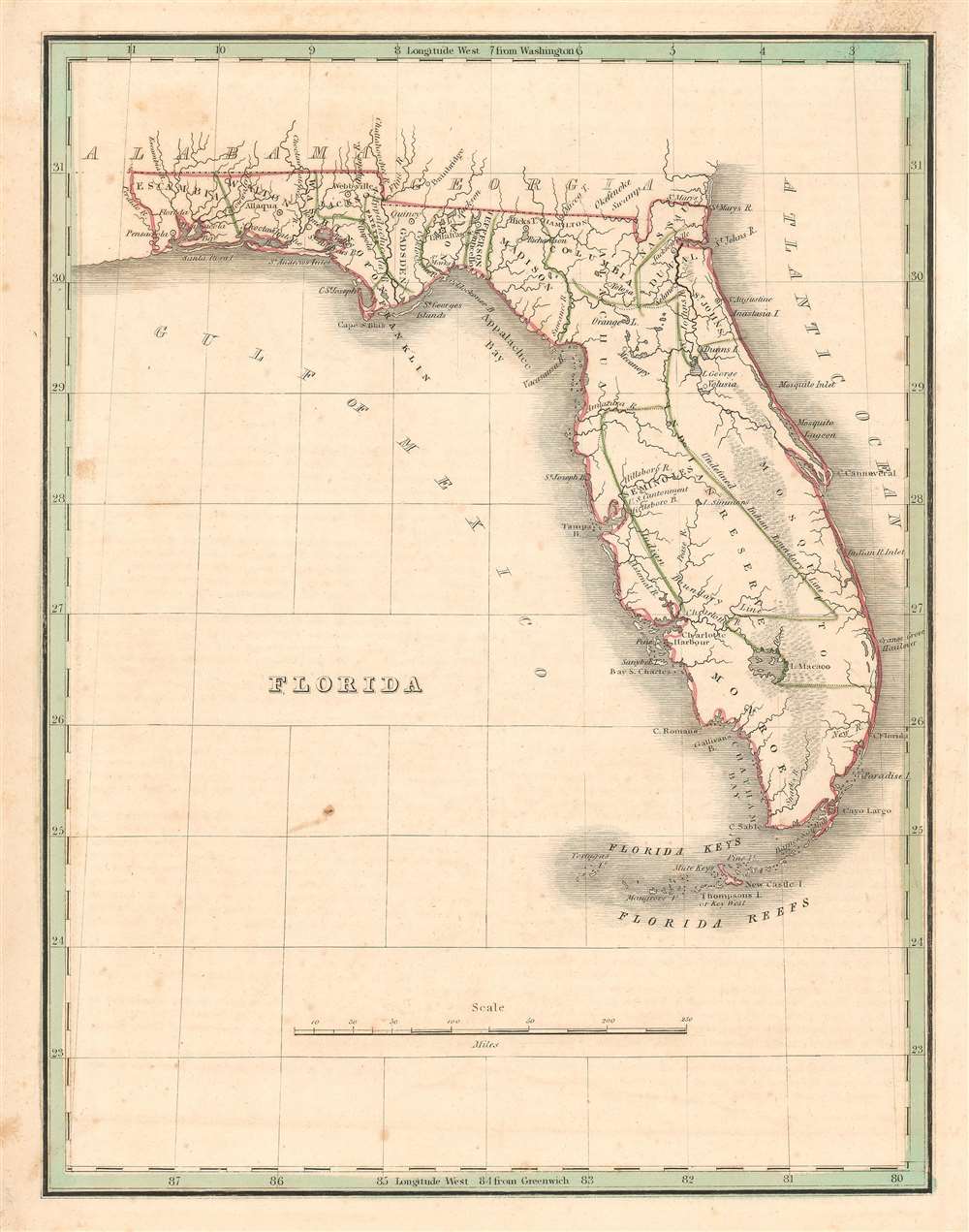 One of only 4 known maps to illustrate the ephemeral central Florida Seminole Reservation established by the Treaty of Moultrie Creek.

A scarce early 1835 map of Florida by Thomas G. Bradford illustrating the ephemeral Seminole Reservation in central Florida just before the outbreak of the Second Seminole War (1835 - 1842). The map's coverage extends from the Alabama / George / Florida border and south to the Keys. It exhibits an early county structure as well as the central Seminole Reservation established by the 1823 Treaty of Moultrie Creek. Floridly rides high on the map and is uncannily small, suggesting that Bradford may have extracted this part of the plate from an earlier general map. Cuba is notably absent.

This is one of the few maps to illustrate the boundaries of the tentative Seminole Reservation established by the September 1823 Treaty of Moultrie Creek. Under this treaty, as long as the Seminole remained in the reservation, the U.S. was obligated to offer protection, compensation for relocation, and a food subsidy. The boundaries of the reservation segregated a part of central Florida extending roughly from the Withlacoochee River (Amacura River) near Ocala, south to a line even with the southern end of Tampa Bay. The eastern and western boundaries were well inland from both coasts, supposedly to prevent contact with traders from Cuba and the Bahamas. The Seminole abided by the treaty, moving into the reservation, establishing a peace that lasted roughly 5 years. Tensions erupted again in 1830, when Congress passed the Indian Removal Act, calling for the relocation of the Seminole and other tribes west of the Mississippi. Over this and other issue, the Second Seminole War erupted in 1835. Other maps depicting the ephemeral Seminole Reservation include Anthony Finley's map of 1831, Mitchell's map of 1831, and the Searcy map of 1829.

The Seminole were a composite tribe formed from various southeastern American Indian tribes that were relocated to a large reservation in Central Florida. These included the Alabamas, Choctaw, Yamasees, Yuchis and Creek people, as well as escaped slaves.

In 1834 the United States government forced the Seminole to sign the Treat of Payne's Landing, which gave the tribe three years to move west of the Mississippi and join the Creek Tribe. The Seminole, rightly claiming unfair negotiations, renounced the treaty and, instead of moving west, entrenched themselves in the Florida swamps. The subsequent war proved long and bloody, with neither side gaining a solid advantage. Ultimately, the superior resources and numbers of the United States military proved decisive. Most of the Seminole were removed to the Indian Territory (Oklahoma) while the remaining Seminole in Florida removed to a large informal reservation located between Lake Okeechobee and Tampa.

This map is little known and often misunderstood by collectors as it is scarce and has no date or imprint. It appeared in an early variant edition of Thomas G. Bradford 1835 A Comprehensive Atlas. Geographical, Historical and Commercial. The map predates the Second Seminole War, for which Bradford reengraved the map with a more common larger Florida plate in response to increased commercial interest in the peninsular territory. As such, it is extremely ephemeral, and rare on the market.