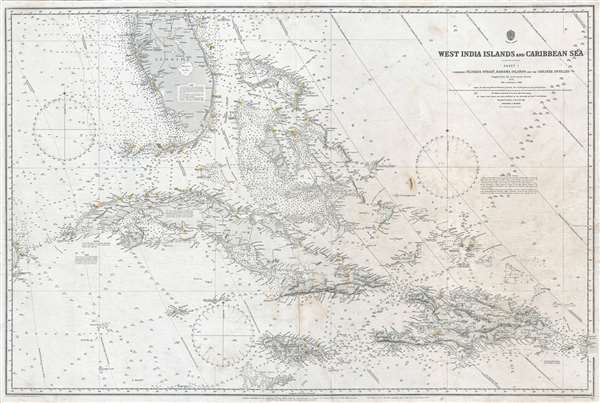 A very attractive 1913 British Admiralty Hydrographic Office nautical chart or maritime map of the West Indies, specifically the Greater Antilles (Cuba, Hispaniola), the Bahamas, Jamaica, and peninsular Florida. This is sheet 1 of the British West Indies and Caribbean Sea series. The chart features extensive depth soundings, in fathoms throughout and well as yellow and red indications of buoys, lighthouse, and light boats. Consistent with Admiralty stylistics, there is little inland detail beyond basic topography and notations of some inland river and lake systems. This particular chart exhibits some manuscript annotations in pencil highlighting additional shoals and offering occasional additional depth soundings.

Good. Minor soiling and creasing. A couple of minor verso repairs to closed tears at margins.
Looking for a high-resolution scan of this?