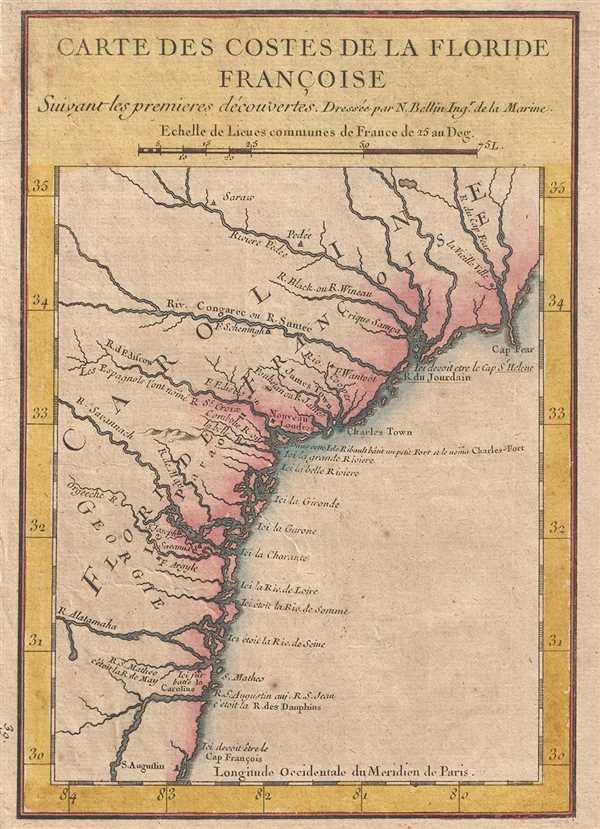 A beautiful hand colored example of Jaques Nicholas Bellin's unusual and interesting 1744 map of the American Southeast. The map depicts the southeastern coast of the modern day United States roughly from St. Augustine, Florida to Cape Fear, North Carolina. As the title suggests, this map details the coast line according to the 'premieres découvertes' (first discoveries). In this Bellin is referencing a short lived French attempt dating to the middle of the 16th century to colonize the Florida, Georgia, Carolina coastal region. In the first half of the 18th century, before the losses of the French and Indian War, France still maintained imperial ambitions for the Americas. This map gives evidence that France has not forgotten its early claims to the American southeast. The map follows the nomenclature established by Jean Ribault and Rene Goulaine de Laudonniere between 1562 and 1565. The more common British names are thus replaced with older French identities, including Grionde, Garone, Charante, Lourie, Somme, and Seine, among others. Not completely blind to the British occupation of this region, English place names are also presented where appropriate - such as Savannah, Cape Fear, New London, Jamestown, etc. This last place name bears special note as it places James Town along the Ashley River, here erroneously misnamed the James River. Of course, the real Jamestown, far to the north, would not have been included on this map.

Bellin prepared this map to illustrate Pierre François Xavier de Charlevoix's Histoire et description generale de la Nouvelle France, however most of its major updates are based upon the manuscripts compiled by Gaspard-Joseph Chaussegros de Lery, a French-Canadian military engineer active throughout French America in the early 18th century. Charlevoix himself was a Jesuit missionary and traveler commissioned by the French Crown and the Duke of Orleans to reconnoiter French holdings in the Americas. The French had just lost control of the Hudson Bay and were actively in search of a profitable route to the Pacific, which many believed lay in the network of rivers and lakes to the west of the Great Lakes. Charlevoix thus had the secondary commission to 'inquire about the Western Sea, but [to] still give the impression of being no more than a traveler or missionary.'

Charlevoix's history proved exceptionally influential as one of the most comprehensive works on North America predating the French and Indian War. Copies of the Histoire et description generale were to be found in the libraries of many 18th century luminaries, including Voltaire, Franklin, and Jefferson. Jefferson especially admired Charlevoix's work, calling it 'a particularly useful species of reading' that no doubt influenced his decision to pursue the historic 1802 Louisiana Purchase, possibly the most significant event in the post-colonial history of North America.