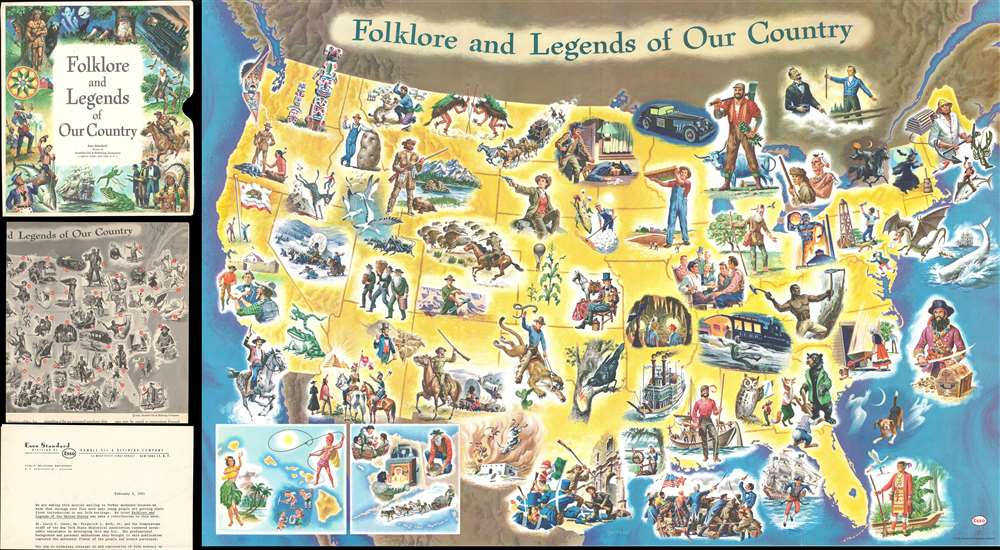 A special edition of Soltesz's folklore and legends pictorial map most likely meant for use in classrooms.
$300.00

This is a special edition 1960 Frank J. Soltesz and Esso pictorial map of the United States illustrated with national folklore and legends - with accompanying binder and letter from publisher. Recognizable figures include Paul Bunyan and his Blue Ox, Long Jon Silver, Moby Dick, Jonny Appleseed, the heroes of the Alamo (including Davy Crockett), the Headless Horseman, and John Henry, among others. Insets in the lower left focus on the folklore and legends of Hawaii and Alaska - respectively. Verso includes text explaining map as well as a pictorial road map of the United States. Accompanied by original binder, an smaller map that acts as a key to the main map, and a letter from the publisher.

This edition of Soltesz's map was distributed by the Public Relations Department and the Educational Programming Department of Esso Standard, which was a division of Humble Oil and Refining Company. In a letter accompanying the kit, Christopher R. Vagts, the director of the Education Program writes that the company's goal was 'to stimulate interest in and exploration of folk history'. The map itself is slightly larger than later editions we have encountered, and the verso content is educational in nature: a pictorial map promotes 'field trips' to see Americana along the East Coast and in parts of the Southeast, while additional information and reading lists encourage further learning.

The map created by Frank J. Soltesz and published by the Humble Oil and Refining Company in 1960. Humble Oil was part of the ESSO (Exxon Mobile) corporation, created in an attempt to comply with antitrust laws. The ENCO / Humble Oil name was most commonly associated with retail service stations in the American southwest. While this map appears on the market from time to time, we have not seen this edition, nor examples with their original binder and documentation.

Frank J. Soltesz (June 14, 1912 - March 21, 1986) was an American artist and commercial illustrator. Born in Pennsylvania, Soltesz was active from the 1930s until the 1960s. He is most well-known for a series of advertisements published between 1947 and 1951 for the Armstrong Cork Company featuring illustrated cross-sections of buildings and factories. These advertisements, published in the Saturday Evening Post, are wonderfully detailed and garnered instant popularity. The images were so compelling that the Saturday Evening Post offered 21 by 22 inch prints suitable for framing upon request. Soltesz also illustrated for other companies, among them TWA, General Motors, Goodyear, and General Electric. His work appeared in various periodicals of the era, such as Colliers, Sports Illustrated, Life, Fortune, Time, Esquire, Business Week, and U.S. News and World Report. Soltesz married Loretta Simms on June 13, 1941, with whom he had two daughters and a son. Learn More...

Very good. Even overall toning. Text on verso. Accompanied by original folder, key, and letter.
Looking for a high-resolution scan of this?