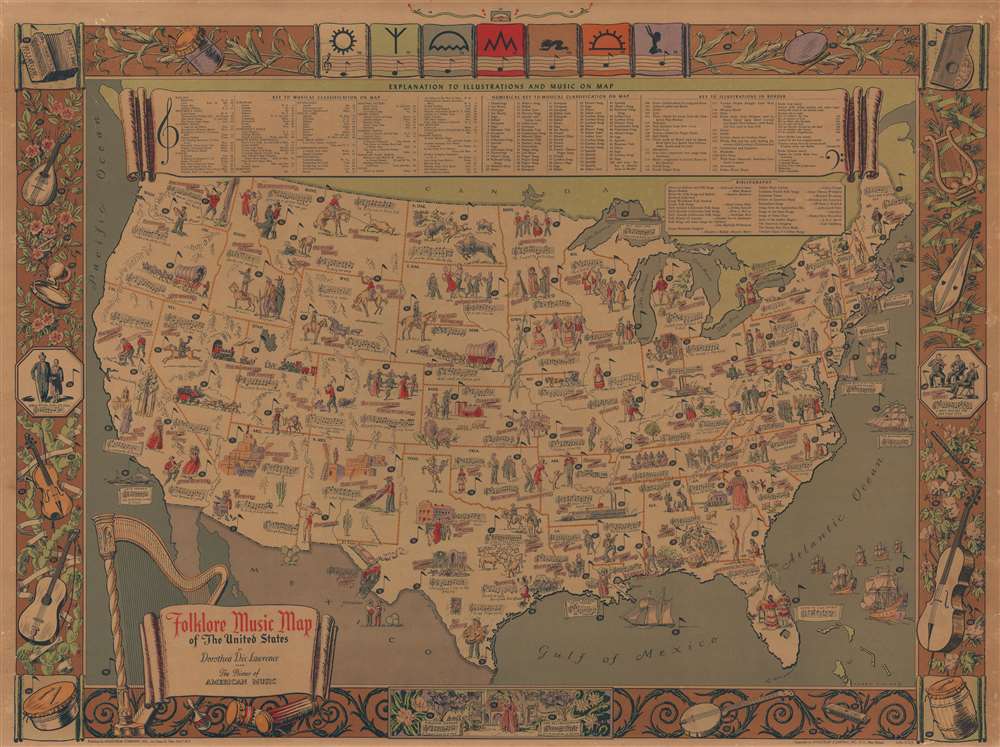 This is a 1945 Dorothea Dix Lawrence and Harry Cimino pictorial folklore music map of the United States. A visual celebration of American folk music, over ninety songs are referenced, with pictorial vignettes, music staffs with notes, and oversized music notes labeling individual songs. Some vignettes illustrate specific scenes, while others present a song's overall aesthetic. A key near the top border identifies songs by their 'musical classification', which include French songs, Miners' songs, Fishermen's songs, Ballads, and Cowboy songs. The pictorial border contains musical instruments, a few more folk songs, and illustrations of Zuni symbols representing musical notes. The key also includes a detailed explanation of the border illustrations.

This map was created by Dorothea Dix Lawrence and illustrated by Harry Cimino in 1945. We note nineteen examples cataloged in OCLC.

Dorothea Dix Lawrence (September 22, 1899 - May 23, 1979) was an American soprano and folklorist. Born in New York City, she attended Barnard College for a while where she studied voice. Her operatic debut happened in 1929 in Montreal with the Quebec Opera Company, and her career blossomed during the 1930s and 1940s, performing regularly throughout the United States and Europe. She also performed on television and radio broadcasts. Lawrence's passion for American folklore and folk music developed during the 1930s and she began collecting songs, including those from the Zuni Indians in New Mexico and residents of the Pine Barrens on New Jersey. She created a radio program called Primer of American Music in 1939, which was sponsored by the Philadelphia Board of Education and consisted of twenty-seven weekly broadcasts. She also produced and starred in an eight-week program entitled Folk Musicians for WNYC. This interest led to the creation of the Folklore Music Map of the United States in 1945, which was widely distributed to American schools. The map became the basis for Lawrence's hundreds of recitals and lectures of American music across North America and Europe. She retired in 1970 and died in Plainfield, New Jersey on May 23, 1979. Learn More...


Harry Cimino (1898 - 1969) was an American woodcut artist, illustrator, and engraver. Cimino collaborated with Dorothea Dix Lawrence (1899 - 1979) on her Folklore Music Map of America. He was born in Marion, Indiana, and died in Sharon, Connecticut. Learn More...