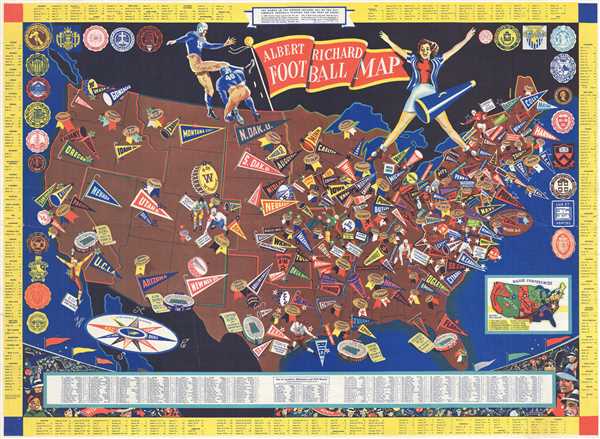 This is a 1940 F. E. Cheeseman and Albert Richard football map of the United States. The map depicts the continental United States from the Pacific Ocean to the Atlantic Ocean and from Canada to Mexico. Pennants from universities and colleges from coast to coast are illustrated throughout the map. The pennants of both traditional powerhouses and smaller schools are present, such as Auburn, Florida, Navy, Princeton, Penn State, Oklahoma, Nebraska, U.C.L.A., Oregon, Washington, and Texas, along with too many more to list here. Other schools are labeled on the map using megaphones (Vanderbilt and Cal – Berkeley), footballs (Alabama, Miami, and Notre Dame), drums (T.C.U. and Wyoming), and even football players (U.S.C. and Texas A and M). Bowl game scores, and the stadiums they were played in, are also illustrated on the map, including the Rose Bowl, Cotton Bowl, Sugar Bowl, and Orange Bowl. A small map depicting the make-up of the major college football conferences is situated on the lower right.

244 colleges and universities are numerically identified, although not all of them are labeled on the map through some sort of insignia. An index along the bottom border provides each college's location, nickname, and win-loss record for the 1939 season. The seals and crests of twenty-five schools sit along the left and right borders, including the seals of Princeton, the University of Southern California, Harvard, and the University of Michigan. The whole is bordered by the names of all the All-America football players 'from the last fifty years' and are listed by school. On the verso, the 1940 schedules for most of the major conference schools are listed, along with advertisements for men's outerwear from a store in Battle Creek, Michigan.

This map was created by F. E. Cheeseman and published by the Albert Richard Company of Milwaukee in 1940.