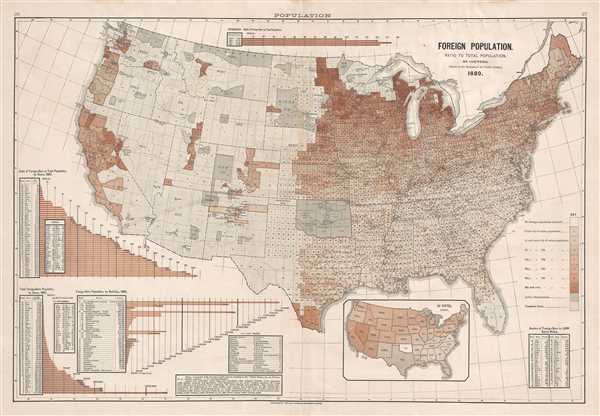 Illustrates the immigrant population by percentage of each county and state in 1880.

This is an 1883 Fletcher W. Hewes and Charles Scribner's Sons political / immigration map of the United States. The map depicts the continental United States from the Pacific Ocean to the Atlantic Ocean and from Canada to Mexico. As immigration had become a pressing domestic issue during the late 19th century, here Hewes and Scribner's illustrate the percentage of each county that can be identified as 'foreign' with relation to the total population of said county, as of 1880. Since the returns from the 1880 census acted as source material for these percentages, it is likely that the numbers reflect self-identified 'foreigners', although the exact definition of 'foreigner' is unclear. The definition appears to be anyone that is not a 'native white'.

Meticulously detailed, each county is illustrated, numbered, and shaded in a manner that corresponds with the key along the right border. The key informs the viewer that the different shades of brown utilized indicate varying percentages of each county's population that were identified as 'foreign', increasing from no foreign population reported to 40% and over of the county's population. Unsettled regions of the country are also indicated in a unique way, allowing for the viewer to easily recognize which parts of the country are uninhabited. Native American reservations are also illustrated and labeled with the name of the tribe and the number of people living in each reservation.