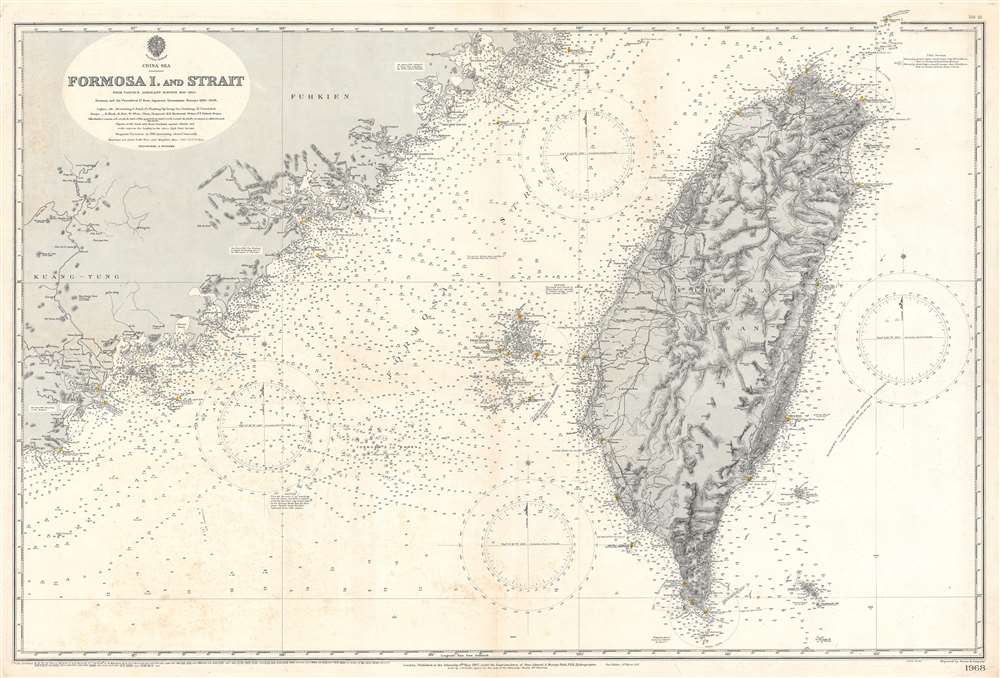 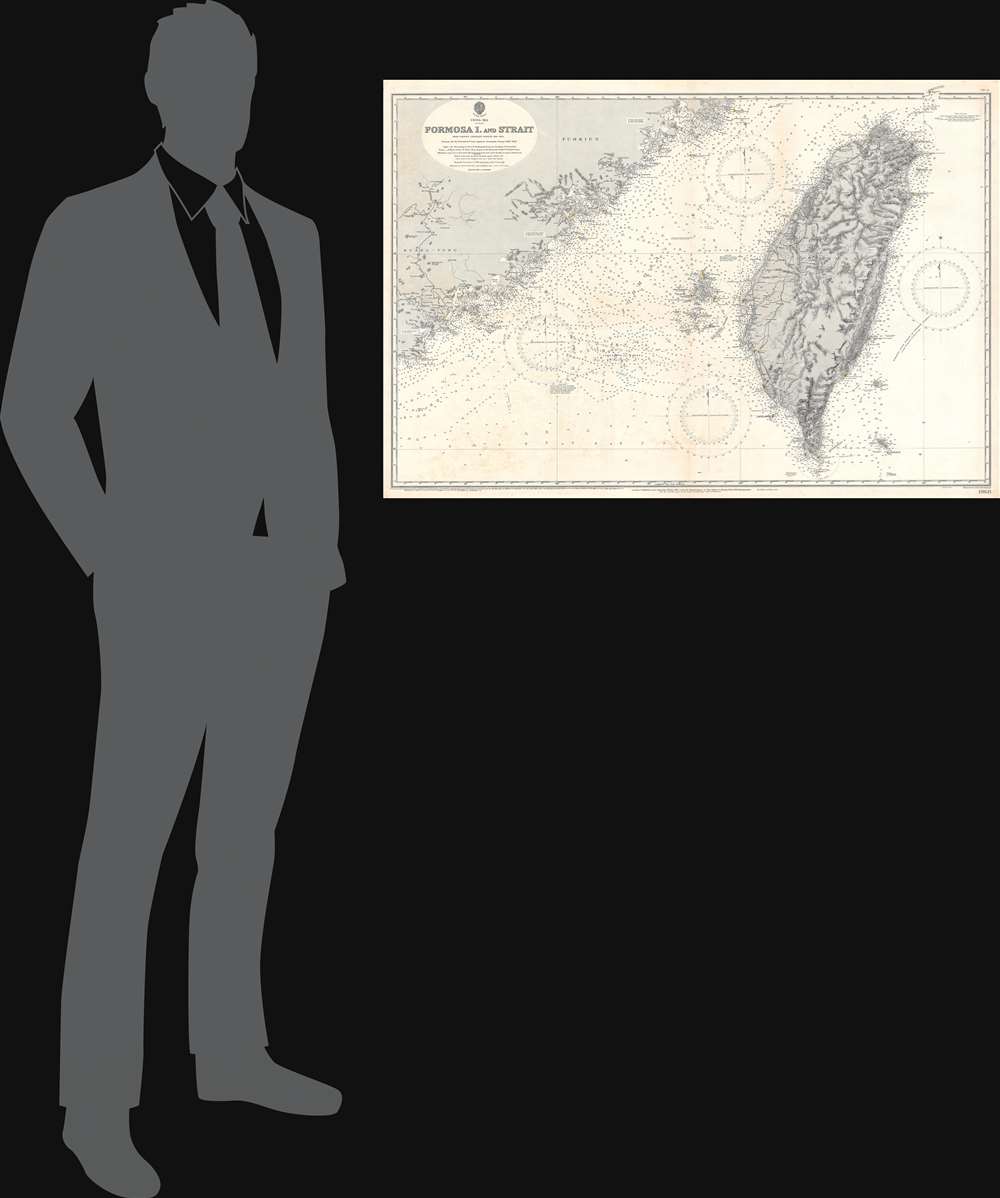 This 1929 British Admiralty nautical chart or maritime map of Taiwan (Formosa) and the Taiwan Strait (Formosa Strait) details one of the most hotly disputed straits on the planet. The map embraces the entire island of Taiwan, the Penghu Islands (Pescadores), and part of the Fujian coast of China. Countless depth soundings appear throughout, with particular attention paid to the coasts. Taiwan exhibits a surprising amount of inland detail for a nautical chart, including roads, cities, towns, villages, and detailed topography. In China proper, inland detail does not extend beyond the coastline and is limited to rivers and some high points. Yellow manuscript notations mark coastal lights and beacons.

This map was created by the British Admiralty and originally published in 1907 under the superintendence of Arthur Mostyn Field. The map was subsequently updated several times, with the present example dating to 1929. Examples of every edition of this chart are rare. We have been unable to locate any other examples of the 1929 edition and only three examples (each representing a different edition) are cataloged in OCLC.


Arthur Mostyn Field (June 27, 1855 - July 3, 1950) was a senior officer in the Royal Navy and from 1904 - 1909 served as Hydrographer of the Navy. Born in Braybrooke, Field joined the Royal Navy in December 1868. He was promoted to lieutenant on October 15, 1875. In 1876, Field was appointed to the Fawn, a surveying ship captained by W.J.L. Wharton (who would become Hydrographer of the Navy in 1884). They undertook surveying missions in the Mediterranean, Red Sea, and off the east coast of Africa. Field remained with the Fawn until 1881, when he was assigned to survey the Oil River on the west coast of Africa. Field joined Wharton on the 1882 mission to survey the Straits of Magellan and the Rio de la Plata as his senior assistant. In 1885 Field received his first command, the HMS Dart, and spent more than the next four years surveying the coasts of Australia, including the Great Barrier Reefs and the coast of Queensland. These surveys were viewed very highly and his work off the coast of Australia earned him a promotion to Commander in June 1889. Field continued in his naval career, earning several shore and sea appointments. He was promoted to Captain on June 30, 1895, and commanded the HMS Penguin around Australia and the South Pacific, until 1898, when he was called back to home waters to conduct surveys. He succeeded W.J.L. Wharton as Hydrographer of the Navy in 1904 and served in that position until 1909. Field was promoted to Rear-Admiral in 1906 and to Vice-Admiral in 1910, when he was appointed Acting Conservator of the River Mersey, a position he held until 1930. Field died at the age of ninety-five on July 3, 1950. He married Laura Mary Hale in 1894, with whom he had one son, Thomas Mostyn Field, who followed his father into the Royal Navy and died aboard the HMS Queen Mary during the Battle of Jutland on May 31, 1916. Learn More...

Very good. Even overall toning. Exhibits light soiling.
Looking for a high-resolution scan of this?