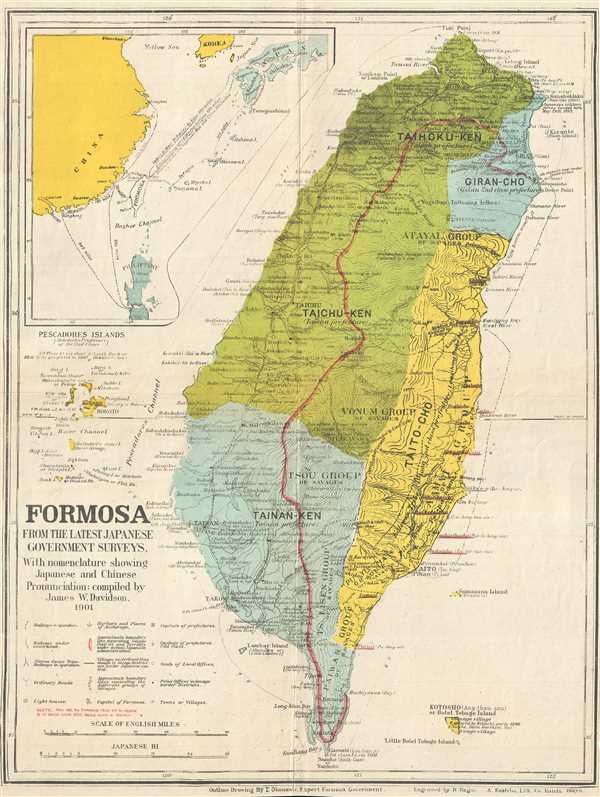 Associated with The Island of Formosa Past and Present recognized as one of the foremost works on the history of Taiwan.

This is a 1901 James Wheeler Davidson map of Formosa / Taiwan. The map depicts island of Taiwan from Fuki Point and Kelung (Keelung City) to Garambi, which is Kenting National Park today, and from the Pescadores Islands to the Pacific. The island itself is divided into prefectures, each of which is illustrated by a different color. Numerous cities and towns are labeled, as well as locations along the coast. Topography, railways, and roads are depicted. The Pescadores Islands are included on the left with numerous labeled locations. A legend is in the lower left corner. An inset map in the upper left corner places Taiwan regionally, and includes sea lanes and distances between China, Japan, and the Philippines.

This map was compiled by James Wheeler Davidson, with the outline drawn by T. Obanawa, an expert in the Formosa government. The map was engraved by N. Nagai and printed by A. Koshiba Lithography Company of Tokyo. It was published in Davidson's book The Island of Formosa Past and Present. History, People, Resources, and Commercial Prospects, which is recognized as one of the foremost monograph's on the history of Taiwan.

In 1903 Davidson left Formosa, with the mission to complete a careful survey of the territory adjacent to the Asian section of the Trans-Siberian Railway. In 1904, he was appointed to a position in the consulate in Dalny, Manchuria. He later became consul at Andong, Manchuria. In 1905 Davidson was appointed consul general at Shanghai by President Theodore Roosevelt. He left the foreign service in 1905, and after a short convalescence in the United States, moved to Canada where he became a successful businessman. He was also a member of the Rotary club in Calgary, and went on to found international branches all over the world. He was a fellow of the Royal Geographical Society and a member of the Explorers Club. Davidson died in Vancouver on June 18, 1933 Learn More...