1887 Kurz and Allison View of the Civil War Battle of Fort Donelson, Tennessee 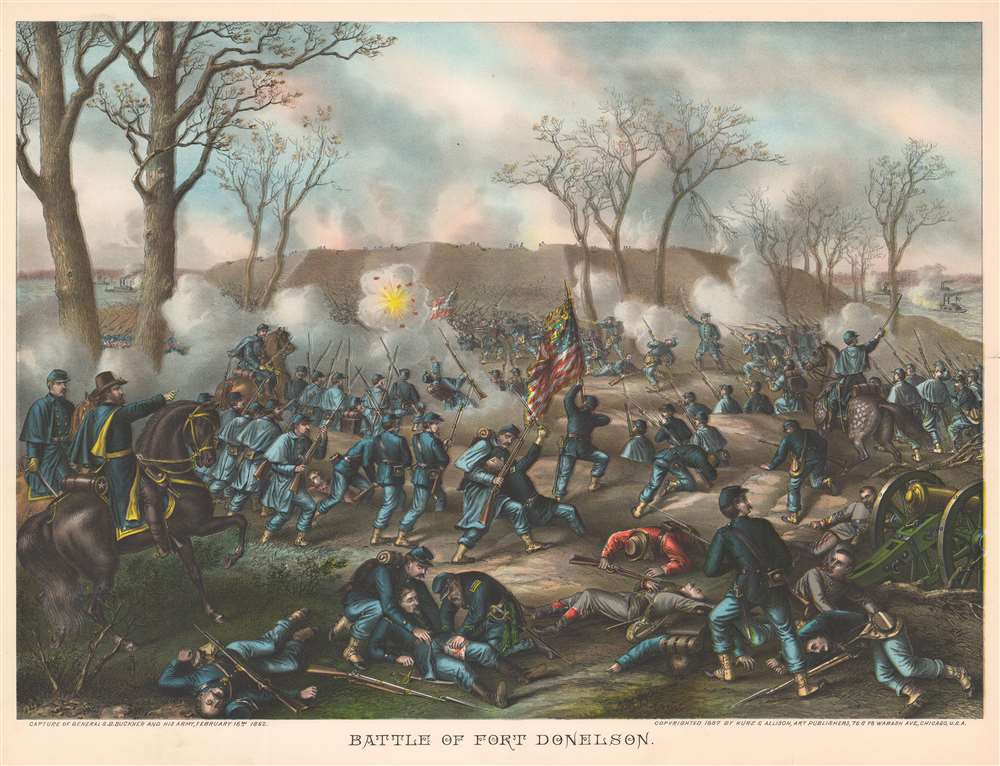 1887 Kurz and Allison View of the Civil War Battle of Fort Donelson, Tennessee

This is an 1887 Kurz and Allison view of the American Civil War (1861 - 1865) Battle of Fort Donelson, Tennessee. The view illustrates the Union Army of the Tennessee commanded by Brigadier General Ulysses S. Grant (depicted on the left astride a horse) assaulting the Confederate stronghold at Fort Donelson.

The Battle of Fort Donelson

A major engagement in the Western Theater of the American Civil War, the Battle of Fort Donelson pitted an attacking Union force against a besieged Confederate army inside the fort. The battle was fought from February 12 - 16, 1862 and ended in Union victory. Confederate forces, commanded by Brigadier General Gideon Johnson Pillow, unsuccessfully attempted to break the siege. After three days of savage fighting, Union General Ulysses S. Grant, responding to a note from Confederate Brigadier General Simon Bolivar Buckner, stated that the only terms of surrender he would offer would be 'unconditional surrender'. Buckner, who had been third in command, but was made commander after generals Floyd and Pillow fled, accepted Grant's terms, and ended the battle.

The Union victory opened a path to Nashville, which was evacuated by Confederate forces on February 23, becoming the first Confederate capital to fall. Grant was promoted to major general, making him the second highest-ranking officer in the Union Army. Over 12,000 Confederate soldiers were captured, as they had been unable to escape the siege, and most of Tennessee now fell under Union control, although it was not immune to Confederate invasion or periodic raids.

The publishing firm Kurz and Allison created a series of thirty-six battle scenes from the American Civil War in the late 1880s and early 1890s. At the time of their publication, historical interest in Civil War was at an all-time high with many of the participants still alive, heroes to the subsequent generation. Kurz and Allison's views, due to their high production quality, were the most popular series of Civil War views ever published. In a style reminiscent of Currier and Ives, the chromolithographs were not meant to be purely historical representations, and from time to time, included historical inaccuracies. Even so, 'prints depicting the Civil War battles by Kurz and Allison are among the most sought-after collectibles of Civil War enthusiasts.'

Chromolithography is a color lithographic technique developed in the mid-19th century. The process involved using multiple lithographic stones, one for each color, to yield a rich composite effect. Oftentimes, the process would start with a black basecoat upon which subsequent colors were layered. Some chromolithographs used 30 or more separate lithographic stones to achieve the desired product. Chromolithograph color could also be effectively blended for even more dramatic results. The process became extremely popular in the late 19th and early 20th centuries when it emerged as the dominate method of color printing. The vivid color chromolithography produced made it exceptionally effective for advertising and propaganda imagery.

This view was published by Kurz and Allison in 1887. A single example is cataloged in OCLC, part of the collection at the Library of Congress. Scarce on the private market.