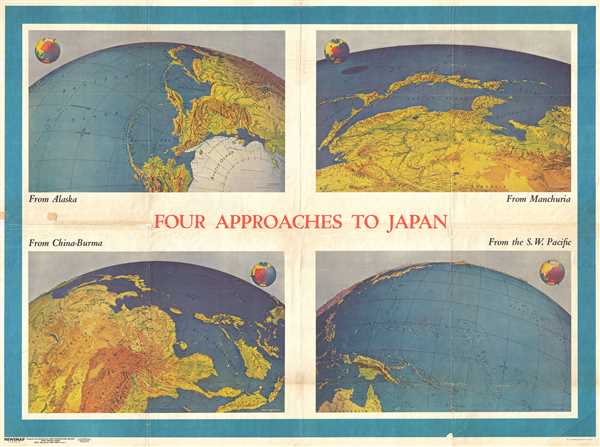 Two-sided U.S. Army publication detailing the the action of the first week of May 1944 - created for military use, not for public consumption!
$275.00

This is a 1944 Army Information Branch double-sided Newsmap for the week of April 27 to May 4, 1944. It was issuedo n May 8, 1944. One side of the map features four Richard Edes Harrison maps or views depicting the four approaches to Japan. The other includes information and photographs from both the Italian and Pacific campaigns and a map depicting the pre-invasion air offensive undertaken by the Allies which presents continental Europe from England and Spain to Leningrad and the Black Sea and from Oslo and the North Sea to Naples, Greece, and Turkey.

Concerning the Four Approaches to Japan, each of the four incredible maps measures 12.5 x 20 inches and are printed in full color. All the maps depict the topography of the region illustrated on a spherical Earth and label the countries included. The four titles are: From Alaska, From Manchuria, From China-Burma, and From the S.W. Pacific. Although these four maps do not include notations detailing combat actions within each view, all four views depict regions that experience fierce battles. Richard Edes Harrison is credited with bringing a fresh perspective to cartography, as he was not a trained cartographer. He compiled his maps from various sources and is credited with being one of the first to employ the spherical view, which allows for a much better understanding of real distances between locations, especially as it relates to air travel.

The other side of the map presents detailed information about the progress of the war over the previous week. Information about the far-flung air offensive over Europe is the first story, stating that targets have ranged from Oslo to Ploesti in Romania. Raids had been undertaken from Allied bases in both England and Italy against an extensive list of targets over the previous month. In Italy, fierce fighting in Anzio continued and would until the capture of Rome in early June. In the Central Pacific, the Pacific Fleet led another raid on Truk Island in the Carolines. Truk was one of Japan's major forward operating bases in the Pacific and would prove to be a tough assignment. The Pacific Command, led by Admiral Chester Nimitz, decided to 'leapfrog' Truk and let it 'wither on the vine' as Allied naval attacks took a toll on Japanese shipping, opting to launch their next campaign in the Mariana Islands. Japanese military units were surrounded and stranded throughout the Pacific, as was done in the offensive on New Guinea which is related in the section discussing the Southwest Pacific. These soldiers were left to either starve or die of disease, since they did not choose to surrender. The sections covering Southeast Asia and the Eastern Front are far less detailed, although two different engagements are recounted in the Southeast Asian theater. Heavy fighting was reported around Imphal in India and along the Mandalay-Myitkyina railway in Burma. The map, on the right, details continental Europe, with myriad cities labeled, both capitals and smaller cities. Rail lines are depicted, along with the two different zones of the air offensive. One is based in England, the other in Italy.

The photographs printed here come from the Italian and Pacific theaters. The three images along the left border were taken in Italy, the top one on the Anzio beachhead, the second features a captured German remote-controlled miniature tank that had been disabled by machine gun fire, and the third depicts a U.S. Army barber somewhere in Italy, who has several different cuts available, including a Saturday special, 'shave, haircut, and purple-heart' for only one dollar. The other photographs, along the bottom, come from the Pacific. The image of the fleet was taken in the Marshall Islands and includes nine aircraft carriers and a dozen battleships, cruisers, destroyers, and supply ships. The other three images come from jungle combat on the islands. The photograph of the soldier was taken on Bougainville, while a location is not given for the other two. The larger of the three images depicts a pontoon bridge built by the Army Engineers after the local bridge had been washed away by a flood.

This map was prepared and distributed by the Army Information Branch from public sources of information. It was distributed in the Navy by the Educational Services Section and was published on May 8, 1944.