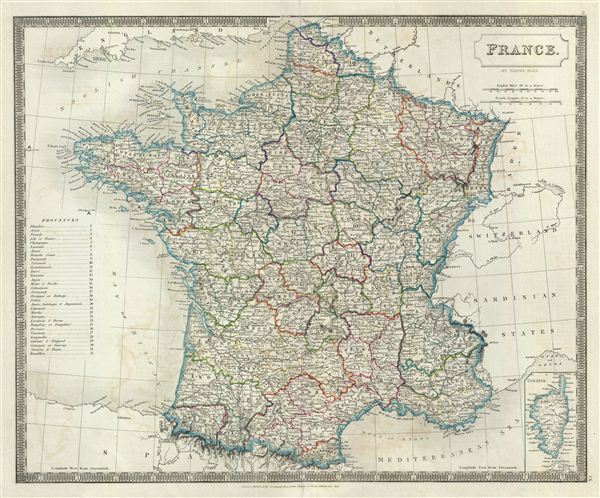 This is a beautiful map of France from Sidney Hall's extremely scarce 1835 New General Atlas. It depicts the Kingdom of France showing all its various divisions according to province, covering from the Flanders in the north to Roussillon in the south and from Brittany in the west to Alsace in the east. An inset map on the lower right corner details Corsica. Towns, rivers, mountains, important battle sites, and various other important topographical details are noted. Elevation throughout is rendered by hachure and political and territorial boundaries are outlined in color. Various battlegrounds are identified, including the Battle of Ushant (under admiral Keppel) in 1778, the Battle of Quiberon Bay (under admiral Hawke) in 1759, among others. A key along the left border lists the 32 provinces. Until 1790 France was divided into 40 provinces based on local loyalties and feudal histories. On March 4th of 1790 the National Constituent Assembly reorganized the Provinces with what the Assembly deemed a more rational political structure. The new department system was intended to deliberately break up France's historical regions in an attempt to erase cultural differences and build a more homogeneous nation. Initially there were 83 departments but by 1800 that number increased to roughly 130. Many of the departments that were created in 1790 remain administrative districts to this day. But old habits being what they are, many maps, including Hall's, continued to depict the provinces of France. This map of France was issued during the July Monarchy, a liberal constitutional monarchy under King Louis-Philippe instigated by the July Revolution of 1830. The July Monarchy would last until the Revolution of 1848 which saw the establishment of the Second Republic.