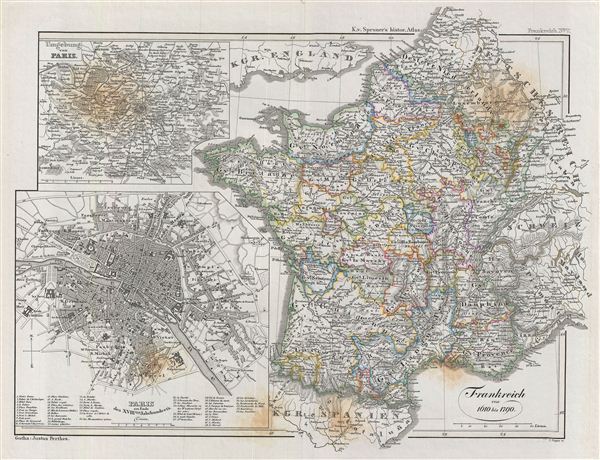 This is a fascinating example of Karl von Spruner's 1854 historical map of France from 1610 to 1790. The map covers France from Calais in the north to the Spanish border in the south. Two inset maps on the top left and bottom left quadrants detail the environs of Paris and Paris at the end of the 18th century, respectively. At the opening of the 18th century France was one of the dominant powers in europe. With a population of nearly 19,000,000 under a single government and ample arable farmland, France dominated most of europe socially and economically. The Ancien Regime was established by the Bourbon and Valois Dynasties in the 15th century. In 1785, France faced economic difficulties and ultimately the growing discontent and the ideas of 'equality' and 'freedom of the individual' among the populous would lead to the French Revolution.

As a whole the map labels important cities, rivers, mountain ranges and other minor topographical detail. Political and regional boundaries are outlined in color. Relief is shown by hachures, and the whole is rendered in finely engraved detail exhibiting throughout the fine craftsmanship for which the Perthes firm is best known. Prepared by Karl Spruner for publication as plate F V in the second edition of Justus Perthes' 1854 Historisch-geographischer Hand-Atlas zur Geschichte der Staaten europa's vom Anfang des Mittelalters bis auf die Neueste Zeit.