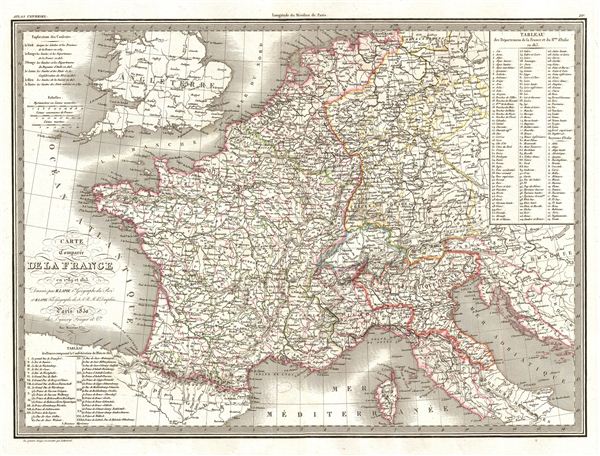 A fine first edition example of M. Lapie's 1830 comparative map of France in 1789 and 1813. Marking a period of historical significance, this map depicts the French empire both before and at the height of Napoleon's conquests. At its greatest extent Napoleon's French empire stretched eastward from the Atlantic to include all of Germany, Austria, and Northern Italy. The upper right corner of the map contains a table listing the departments of France and the Kingdom of Italy in 1813.

The substance of this map emerges through the color coding, which is defined by a key in the upper left quadrant. Coding defines the designated borders of France in 1789 and compares them to the expanded borders of 1813. It also delimits the departments of the Kingdom of Italy, the states of the Confederation of the Rhine, and the boundaries of Switzerland and neighboring states.

The French Revolution began in 1789 and resulted in the abolition of the French monarchy and its replacement with a radical democratic republic. In 1799, Napoleon Bonaparte staged a coup which led to Bonaparte's dictatorship and eventually (in 1804) to his proclamation as emperor, which marked the end of the republican phase of the French Revolution. The 1812 French invasion of Russia marked a turning point in Napoleon's fortunes and led to the defeat of his forces at the ‘Battle of the Nations' in 1813. In 1814, a coalition of european powers defeated France and forced Napoleon into exile on the island of elba.

This map was engraved by Armand Joseph Lallemand as plate no. 21 in the first edition of M. Lapie's important Atlas Universel. This map, like all maps from the Atlas Universel features an embossed stamp from the Lapie firm.