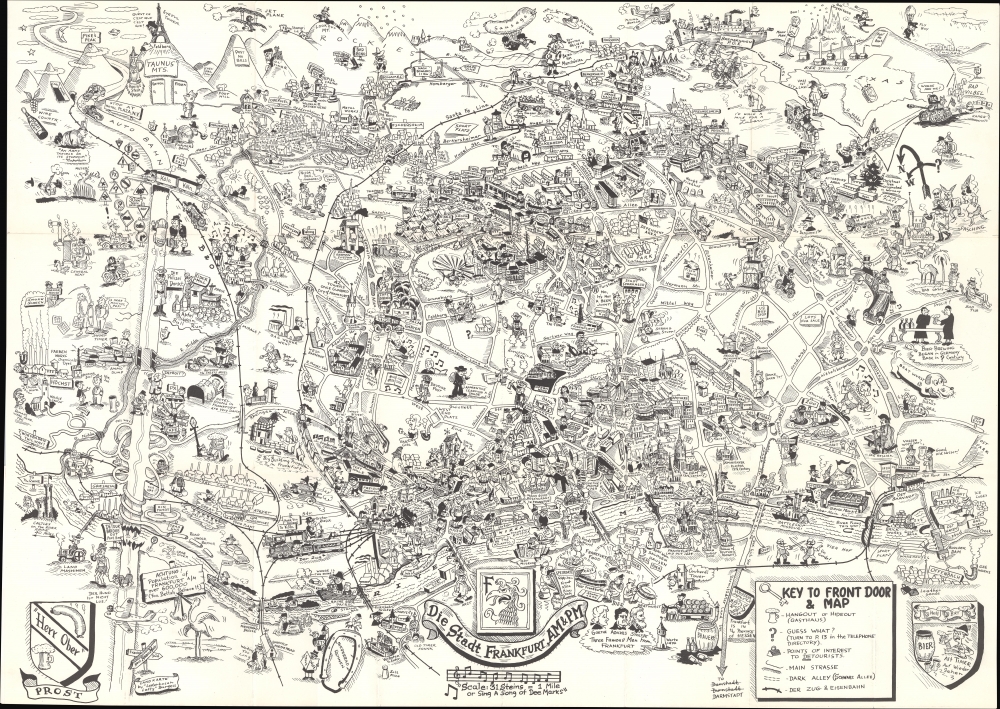 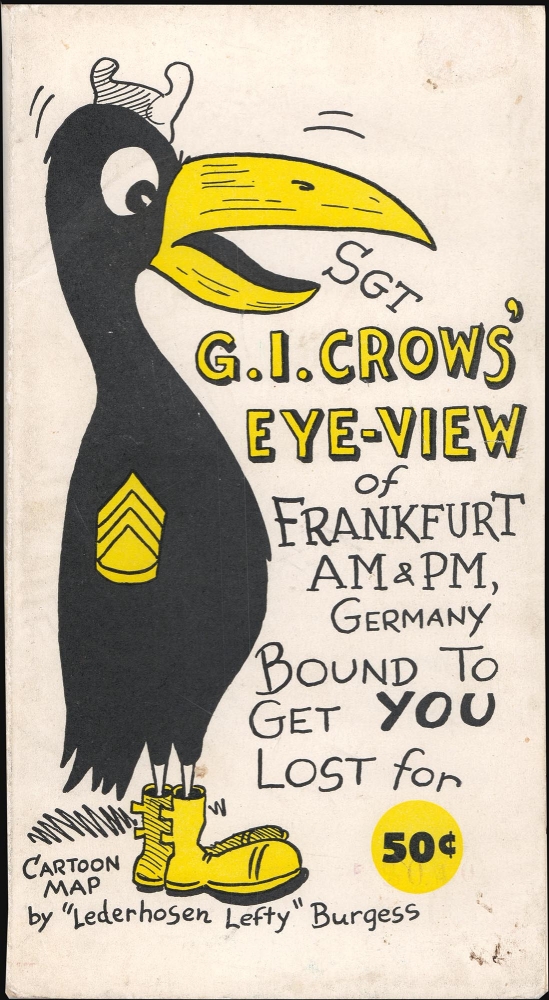 Ephemeral take on American military life in Frankfurt after WWII.
$750.00

This is a 1954 Byrel 'Lefty' Burgess humorous pictorial map of Frankfurt, Germany, published by Stars and Stripes in Darmstadt, Germany. This is part of a series of curious and rare maps by Burgess that capture ephemeral inter-war American expat military life. The map depicts the city from the Höchst district of Frankfurt to the town of Bad Vilbel and from the Harheim district of Frankfurt to Offenbach. Frankfurt is illustrated with special attention to the American military presence in the city - a layover of World War II. Several barracks are noted, as is the 97th Hospital and the quarters of the WACs (Women's Army Corps). The American school (referred to by its students simply as Frankfurt High) is also labeled, as is the area where dependents lived and the PX (Post Exchange). Numerous districts within Frankfurt are also identified, including Heddernheim, Bonames, Eschersheim, and Seckbach. G.I.s are present all over the city going about their lives and official army business, but also carousing with women, in beer halls, and simply wandering the city. Military Police are also shown, perhaps in an attempt to help remind the soldiers that there is a need for decorum.

Streets throughout the city are labeled, some of which are marked by comical vignettes, such as a devil next to Dante Strasse saying 'He wrote about me!' or Beethoven Platz and Mendelssohn Strasse, which are accompanied by caricatures of the famous composers. Historic sites are also illustrated, labeled, and usually dated, such as the Dom which dates to the 13th century and, as Burgess notes, is 300 feet high. The Saalhof, the Karmeliter Kloster, and the Dominikaner Kloster are also labeled. Other sites, such as the Drei Königs Kirche, are highlighted by comical vignettes. Certain historical facts, like the 'Roman Tourist' from 900 or the spa in Bad Homburg where, apparently, 'Wilhelm II bathed', are included. Perhaps the most pervasive reference, though, is to beer, 'bier', a German cultural treasure. In a flair unique to Burgess, locations in the United States are situated along the map's top border, including Pike's Peak in Colorado and the Rocky Mountains, Texas, the 'Los Angeles City Limit', and Chicago.

This map was created by 'Lederhosen Lefty' Burgess, as he signed the map, in 1954 and published by Stars and Stripes. This map is scarce, with only one example currently in an institutional collection at the University of Chicago and we are aware of only a handful that have entered the private market in recent years.

Byrel William Burgess (April 5, 1914 - March 21, 1983), also known as 'Lefty' and 'Sgt. Crow' was an American career military engineer, as well as a comic and illustrator. Burgess was born in in Owosso, Michigan. In 1938 he was living in Flint, Michigan, where he married Evelyn Anderson and worked as a sign painter for the Works Progress Administration (WPA). He may have had as much as 1 years of college before entering the military. There is a great deal of confusion regarding the dates of his military service, as he seems to have repeatedly entered and left the army, but in general, he was consistently in the U.S. Army Engineering Corps from 1941 to 1962 and attained the rank of Master Sargent. In 1943, he was called to active service to fight World War II (1939 - 1945). He served in Burma and China under General 'Vinegar Joe' Stilwell (1883 - 1946). During his service, he may have met and been inspired by fellow pictorial mapmaker Frank Dorn (1901 - 1981), who also served under Stilwell. His first map, made around 1945, illustrated the city of Chongqing, China, where he was stationed on a covert base at the end of World War II. After the war, he was transferred to London, issuing a pictorial map of that city in 1951. Then to Frankfurt, where he issued his most popular and common map, the 1954 Sgt. G.I. Crows' Eye View of Frankfurt AM and PM, Germany. It is not clear if Burgess served in the Korean War (1950 - 1953), but he was in Seoul in 1957, when he he issued Sgt. Papasan Lefty's Map and Cartoon of the City of Seoul, with a Korean publisher. Around 1960, Burgess was in San Francisco, where in October, he filed copyrights for two maps, A Crow's Eye View of Fisherman's Wharf, Telegraph Hill and part of the Embarcadero and Nite Owl's Map of Chinatown and Nite Club Land. These may never have een published as there are no known examples. Burgess then relocated to San Leandro, where he contributed cartoons to Oak Leaf, the in-house publication of the Naval Regional Medical Center of Oakland. He then lived in Yountville, Napa. He was buried in the San Francisco National Cemetery. Of his several maps, only the map of Frankfurt is obtainable. His map of Seoul is known in only 2 surviving examples. His other work is known only from secondary sources, such as copyright filings and articles. As a pictorial cartographer, his work is significant and unique in capturing U.S. foreign military life at ephemeral historical moments. Learn More...