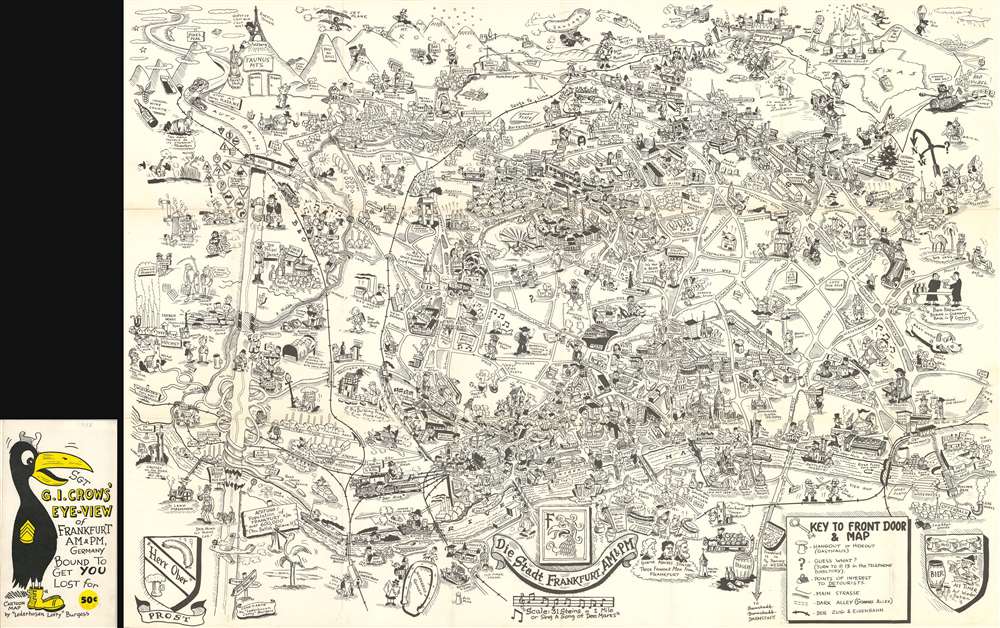 This is a 1954 Byrel 'Lefty' Burgess humorous pictorial map of Frankfurt, Germany, published by Stars and Stripes in Darmstadt, Germany. The map depicts the city from the Höchst district of Frankfurt to the town of Bad Vilbel and from the Harheim district of Frankfurt to Offenbach. Myriad locations throughout Frankfurt are illustrated, with special attention paid to those associated with the American military presence in the city. Several barracks are noted throughout the city, as is the 97th Hospital and the quarters of the WACs (Women's Army Corps). The American school (referred to by its students simply as Frankfurt High) is also labeled, as is the area where dependents lived, as is the PX (Post Exchange). Numerous districts within Frankfurt are also identified, including Heddernheim, Bonames, Eschersheim, and Seckbach. G.I.s are present all over the city. Going about their lives and official army business, but also carousing with women, in beer halls, and simply wandering the city. Military Police are also shown, perhaps in an attempt to help remind the soldiers that there is a need for decorum.

Streets throughout the city are labeled, some of which are marked by comical vignettes, such as a devil next to Dante Strasse saying 'He wrote about me!' or Beethoven Platz and Mendelssohn Strasse, which are accompanied by caricatures of the famous composers. Historic sites are also illustrated, labeled, and usually dated, such as the Dom which dates to the 13th century and, as Burgess notes, is 300 feet high. The Saalhof, the Karmeliter Kloster, and the Dominikaner Kloster are also labeled. Other sites, such as the Drei Königs Kirche, are highlighted by comical vignettes. As are certain historical facts, like the 'Roman Tourist' from 900 or the spa in Bad Homburg where, apparently, 'Wilhelm II bathed'. Perhaps the most pervasive reference, though, is to beer 'bier', a German cultural treasure. References to locations around the United States are situated along the map's top border, including Pike's Peak in Colorado and the Rocky Mountains as a whole, Texas, the 'Los Angeles City Limit', and Chicago is shown in the upper right corner.

This map was created by 'Lederhosen Lefty' Burgess, as he signed the map, in 1954 and published by Stars and Stripes. This map is exceedingly scarce, with only one example currently in an institutional collection at the University of Chicago and we are aware of only a handful that have entered the private market in recent years.

Byrel W. Burgess (April 5, 1914 - March 21, 1983) was an American maker of comic maps and illustrator. Born in Michigan, Burgess served in the U.S. Army in Southeast Asia during World War II and in Korea and Europe during the 1950s. By the early 1960s Burgess had retired to California, having attained the rank of master sergeant. He was buried in the San Francisco National Cemetery. We are aware of only two maps that Burgess ever created, the Sgt. G.I. Crows' Eye View of Frankfurt AM and PM, Germany by 'Lederhosen Lefty' Burgess and Sgt. Papasan Lefty's Map and Cartoon of the City of Seoul.