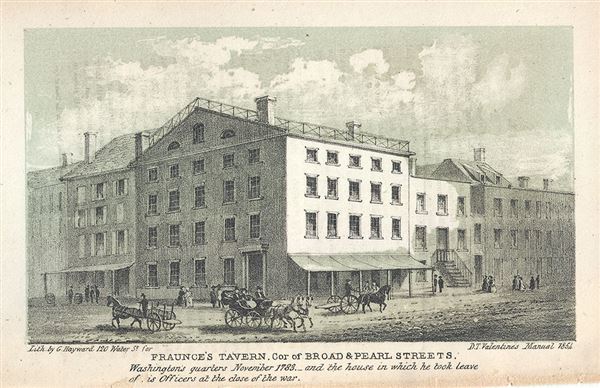 Beautiful view of George Washington's headquarters at the end of the Revolutionary War.

This is a beautifully drawn view of Fraunceâ€™s Tavern located on the corner of Broad St. and Pearl St. in Lower Manhattan. The view features Fraunces Tavern, the headquarters for George Washington during the Revolutionary War while negotiating with the British regarding their evacuation. It was from here, on December 4, 1783, that George Washington bade farewell to the officers of the Continental Army. Colonel Benjamin Tallmadge recalls in his memoirs:

At 12 oâ€™clock the officers repaired to Fraunces Tavern in Pearl Street where General Washington had appointed to meet them and to take his final leave of them. We had been assembled but a few moments when his excellency entered the room. His emotions were too strong to be concealed which seemed to be reciprocated by every officer present. After partaking of a slight refreshment in almost breathless silence the General filled his glass with wine and turning to the officers said, â€˜With a heart full of love and gratitude I now take leave of you. I most devoutly wish that your latter days may be as prosperous and happy as your former ones have been glorious and honorable.â€™

After the officers had taken a glass of wine General Washington said â€˜I cannot come to each of you but shall feel obliged if each of you will come and take me by the hand.â€™ General Knox being nearest to him turned to the Commander-in-chief who, suffused in tears, was incapable of utterance but grasped his hand when they embraced each other in silence. In the same affectionate manner every officer in the room marched up and parted with his general in chief. Such a scene of sorrow and weeping I had never before witnessed and fondly hope I may never be called to witness again.

Today, Fraunces Tavern is a national historic landmark, museum and restaurant and claims to be the oldest surviving building in Manhattan. The view features horse carriages with people walking in the foreground. Published as part of D. T. Valentineâ€™s Manual of the Corporation of the City of New York, 1854.

Valentine, D. T., Valentine's Manual of the Corporation of the City of New York, (New York) 1854.

Very good. Minor toning along edges.
Looking for a high-resolution scan of this?