1830 Laurie Map of the United States as 'Fredonia' 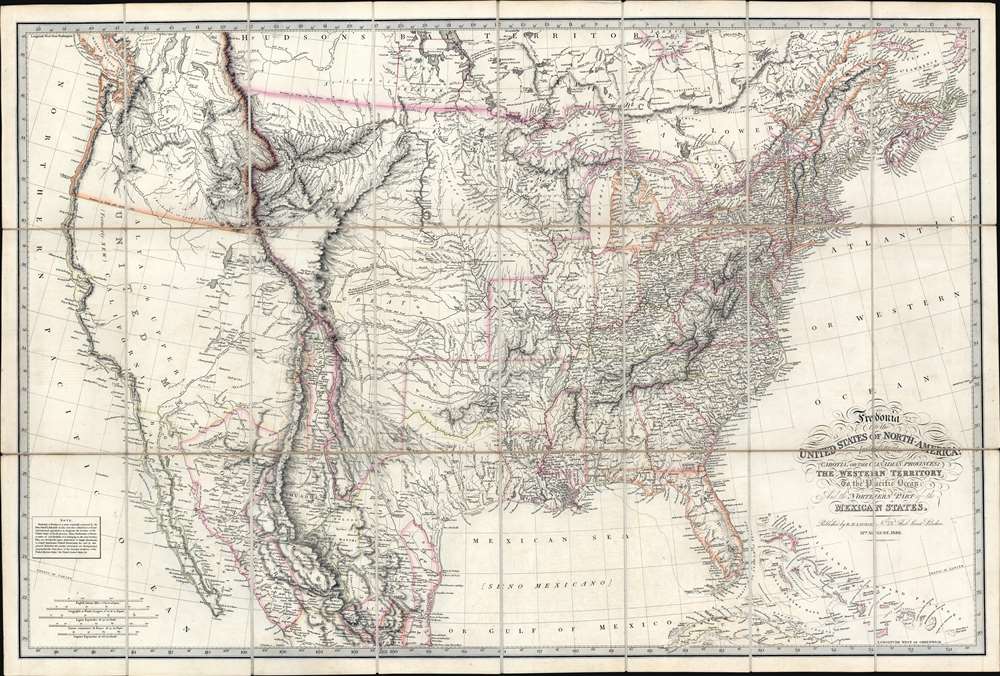 1830 Laurie Map of the United States as 'Fredonia'

A fine example of the rare 1830 first obtainable edition of the famous Richard Holmes Laurie 'Fredonia' map of the United States. The map is best known for its advocation of a new name for the United States - Fredonia, which it is argued would build national pride and solidarity, as well as better distinguish it from Canada (Cabotia) and Mexico. Aside from the map's 'Fredish' qualities, this is considered one of the best early 'Manifest Destiny' maps issued in the wake of Louis and Clark (1804 - 1806), thus illustrating the United States spreading coast-to-coast. It is derived from the most up-to-date sources and includes much of interest throughout. In Florida, it is one of the earliest maps to note the Cape Florida Settlement, a squatter community that was the precursor of modern-day Miami.

The cartographer notes the routes of Louis and Clark to the Columbia River, but curiously separates Oregon, Washington, and British Columbia from both the Hudson Bay Territory (Canada) and the United States at the Rocky Mountains, suggesting that the Pacific Northwest remained, at the time, a no man's land. Astor's Astoria trading post at the mouth of the Columbia River is noted under its British name, Fort George. Warren Heckrotte notes that the geography west of the Rocky Mountains derives from J. Arrowsmith and Humboldt. Wheat states 'Long's Great Desert is prominently displayed, with nearby the Big Horn or Long's Highest Peak, while Escalante's route is carefully marked.' The map also uses the maps of Lewis and Clark (1814), Long (1822), and Arrowsmith's Mexico (1820).

The map garners a lot of attention for its advocation of the term 'Fredonia.' A note in the lower left reads,

Fredońia or Fredon is a name originally proposed by the Hon. Saml. L. Mitchill in 1801, and since adopted, as a broad and universal appellation, to designate the territory of the 'United States of North-America.' Hence Fredonian ore Frede, a native of, and Fredish, of or belonging to, the same territory. Thus are obviated the vague distinctions of Anglo-Americans, or simply Americans, United States'men, and c. and by this generic distinction the country and people are distinguished, geographically from those of the Canadian territories, of the 'United Mexican States,' and the 'United Central States', and c.

The Mitchill in question is Samuel Latham Mitchill (1764 - 1831), an American physician, naturalist, politician, and Columbia College professor based in Long Island, New York. Although only modestly successful, he was known as a deeply intellectual 'Renaissance Man' with strongly held Enlightenment ideals. He was moreover, well connected to the intelligencia of his day, among them Thomas Jefferson. Fredonia was not thought up whimsically. The term 'Fredonia' is derived from a latinized variant derived from the entomological underpinnings of the word 'Freedom'. According to Christian Quendler (Amerikastudien / American Studies, 2016, Vol. 61, No. 3 (2016), pp. 291-314), Mitchill followed

a folk etymological interpretation that reads 'freedom' literally as a 'free dome, copula or capital.' Mitchill suggested that the variant 'Fredon' should signify 'house or residence of liberty' … Then it will mean in a geographical sense, the land of 'free doings' or that wherein by reason of the mild government of laws things are 'freely done'' (Aberbach, Alan David, In Search of an American Identity: Samuel Latham Mitchill, Jeffersonian Nationalist, p. 212).

Later Mitchill adopted another tactic, pointing out the Latin word fredum, a legal term referring penalty for breaking the peace. He wrote that England paid 'a large fredum in blood and treasure' in the American Revolution.

Mitchell initially proposed the idea in 1804, in the aftermath of the American Revolutionary War. He felt that the 'United States' was a poor name, in the since that was more a political designation than a national identity. Writing to Noah Webster, Mitchill wrote, 'we cannot be national in feeling and in fact until we have a national name.' (ibid., 212).

Mitchill was well connected to the intelligentsia and political elite of his day. Not only did he promote the name in news articles and speeches, he also reached out to geographers, among them Jedidiah Morse, the lexicographer Noah Webster, and politicians including Thomas Jefferson. Despite appearing on this map, and in Morse's American Gazetteer, the name was not otherwise adopted for general use. By the 1810s, it became a satirical term connoting false patriotism, and was generally out of favor as a national name. Writes Carl Wheat, 'all us Fredish men should be duly thankful.' The term was nonetheless adopted by several towns, among the Fredonia, New York, and 'The Republic of Fredonia' (1826 - 1827), a short-lived free-booter state near Nagadoches, Texas. By the 1829, when Richard Holmes Laurie, revived the name for this map, Fredonia was largely forgotten. The adoption was likely intended to boost sales of the map through novelty - a successful strategy employed for his early 1814 map of Canada, entitled 'Cabotia.' (Geographicus: Cabotia-purdy-1821) And then there's the Duck Soup…

The Colony of New Selkirk

The short-lived colony of New Selkirk appears in modern day Manitoba. Thomas Douglas (1771 - 1820) unexpectedly became the 5th Earl of Selkirk in 1799. He was an unlikely heir, as his ascension to that title required the death of his father and all six brothers! Douglas was concerned with the plight of Scottish and Irish crofters then being displaced by their landlords, who were reclaiming their lands for more profitable sheepherding. Selkirk determined to resettle the homeless crofters in the New World. He initially used his wealth and estate to acquire lands in Prince Edward Island and in Upper Canada (Ontario). These lands proved insufficient, and Selkirk lobbied for more lands farther west. He reached out to the Hudson Bay Company, who had enormous territorial holdings in central and northern Canada. Although initially rebuffed, he leveraged his connection and wealth to acquire 40% of the HBC, putting them in no position to refuse. Selkirk received a grant for the entire Red River Valley, an area southwest of Lake Winnipeg nearly five times as large as Scotland, and extending into the present Minnesota and North Dakota. This area was at the very edge of HBC holdings and was thus also the stomping ground of the rival Montreal-based North West Company. Major NWC trade routes and supply chains ran directly through Selkirk's Grant - as is evident here, with several NWC posts noted on the Assiniboine River. While initially friendly with the NWC, when food ran short, the Selkirk colonists shut down exports and trade, particularly of pemmican, a frontier food stable made from dried and powdered Buffalo meat. This led to the Pemmican War (1812 - 1821), between the HBC and NWC. Fought at frontier way-stations over rough forts, and between American Indian allies, the war lasted for nearly 10 years until the Hudson Bay and North West Companies merged in 1821 - magically putting aside past aggressions.

This map was issued in multiple editions by Richard Holmes Laurie through the 1830s and into the 1840s. Rumsey and most cartobibliographers cite this map, August 14, 1830 as the first edition, with subsequent editions in 1832, 1833, 1834, 1836, 1849. We are additionally aware of editions dating to 1839 and 1848. May references, possibly going back to Carl Wheat, attribute this map to George Frederick Cruchley (1797 - 1880), or suggest that he issued the map simultaneously with Laurie in 1830, 1832, and 1833 editions. Our research suggests this is not true. Some examples do have a Cruchley pastedown near the cartouche, but these merely reference that the maps were sold at his store, not that he was involved in any way in the printing. No examples of this map bear a direct Cruchley imprint. The University of Texas Arlington holds the sole known example of what might be the true first edition, dated March 26, 1829. That example is unusual on a number of levels, including its lack of topography, limited detail throughout, curious Texas configuration, and presentation as a single unfolded fully colored sheet, leading us to believe it may be an incomplete proof. All editions are rare, with this, the first obtainable edition, being among the most desirable and least common.