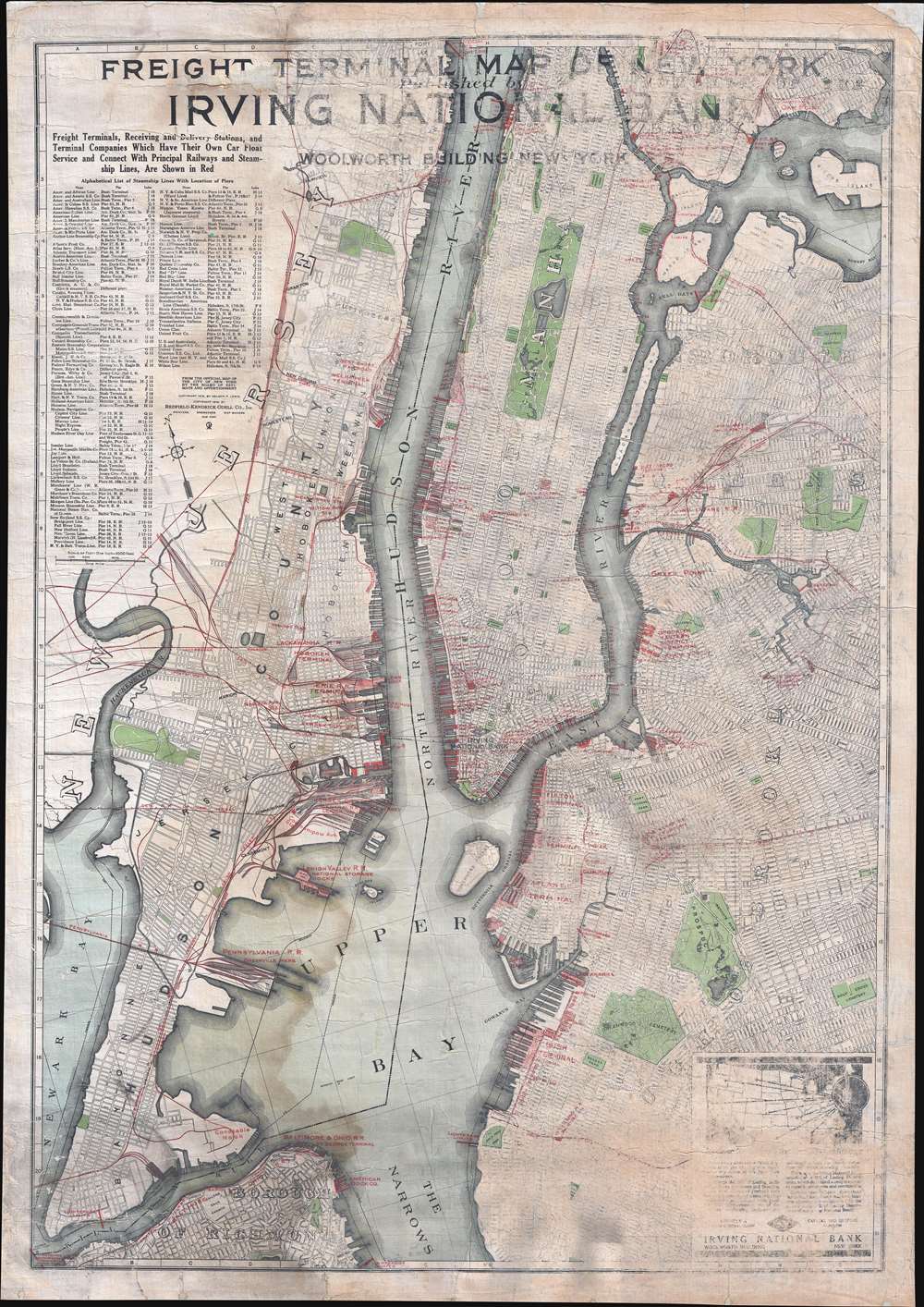 A rare map highlighting New York City's importance as a center for trade.
$600.00

This is a 1916 Irving National Bank and Redfield-Kendrick-Odell Company map of New York City freight terminals. The map depicts the region from the Hackensack River in New Jersey to Brooklyn and Queens and from The Bronx to Staten Island. Freight depots throughout the city and on the New Jersey side of the Hudson River are overprinted in red, including Grand Central Station and Pennsylvania (Penn) Station. Wharves all along both the Hudson and East Rivers are numbered, and certain wharves are labeled with the company that operates that specific wharf. Several railroad terminals are illustrated in fair detail along the New Jersey side of the Hudson, including the Erie Railroad, the Hoboken Terminal of the Lackawanna Railroad, and the Pennsylvania Railroad Jersey City Station. In Queens, the Long Island Railroad is barely legible. Sites throughout the five boroughs are illustrated and labeled, including Central Park, Washington Square, Battery Park, Prospect Park, and Greenwood Cemetery. Most streets are identified as well, although most are barely legible.

This map was created by Nelson P. Lewis, printed by Redfield-Kendrick-Odell Company, Inc., and published by the Irving National Bank in 1916. This map is rare, with only three known examples in institutional collections at the Brooklyn Historical Society, the University of Connecticut, and the University of Chicago. We have been able to trace only one other instance of this map entering the private market.

The Redfield-Kendrick-Odell Company (fl. c. 1913 - 1933) was a printing, mapmaking, and engraving firm based in New York City that was active during the early 20th century.


Nelson Peter Lewis (1856 - 1924) was an American civil engineer. From 1902 until 1920, Lewis served as chief engineer of Brooklyn, New York. He authored The Planning of the Modern City in 1916 and became the Director of the Physical Survey of the Regional Plan of New York and Its Environs in May 1921.