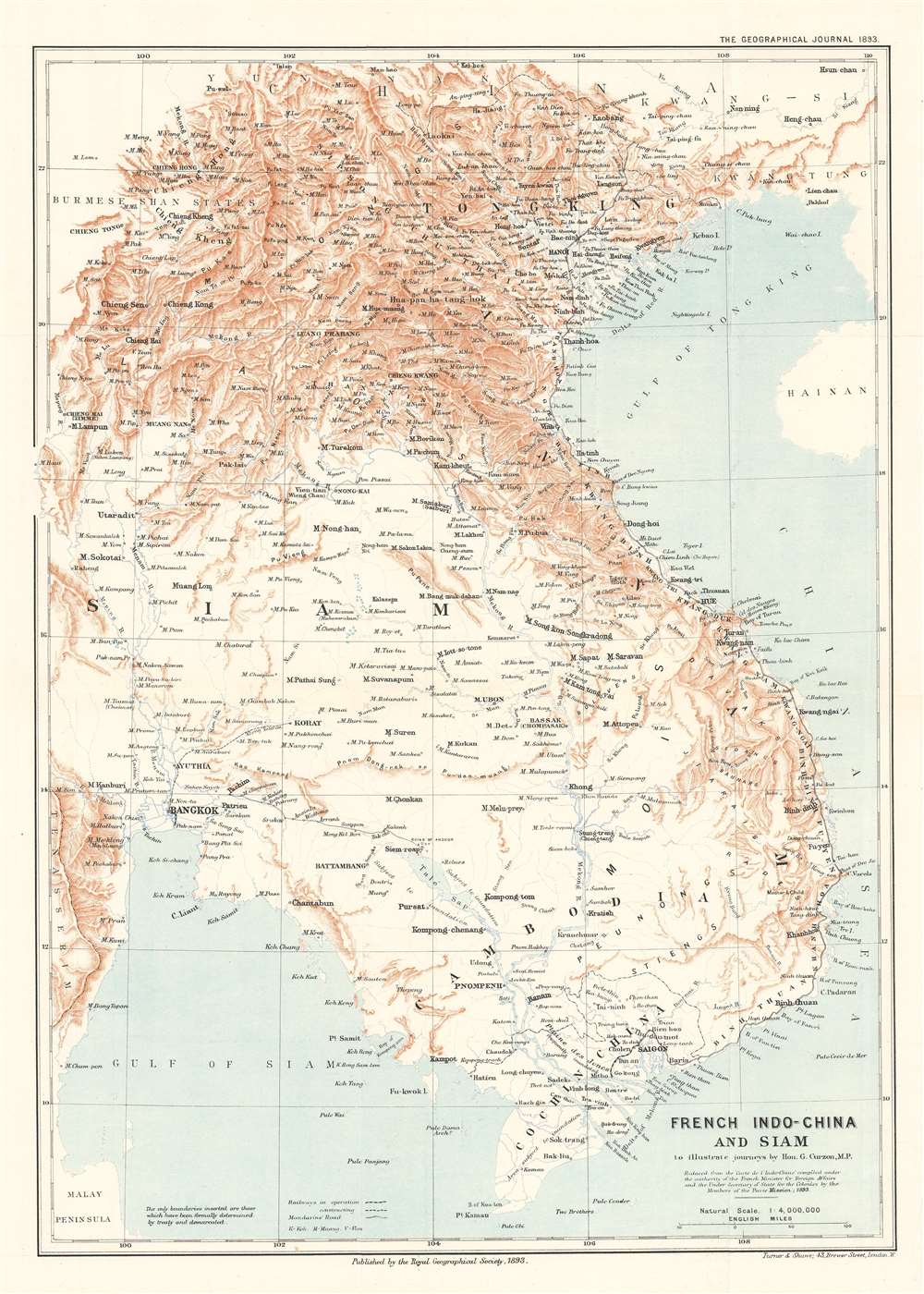 A rare map of Southeast Asia that includes the famous route mandarine.
$450.00

This is an 1893 William Shawe map of Southeast Asia, encompassing modern-day Vietnam, Cambodia, Laos, and Thailand (Siam). A note in the Geographical Journal states that, while the international boundaries were not included because they had not yet been settled, ‘the topography differs considerably from that shown in maps previously published,’ and continues, ‘The present map also contains a large amount of detail in districts previous left nearly blank’. These details include labeling numerous cities, towns, and villages, and tracing the courses of rivers both large and small. Railroads, both those in operation and those under construction, are also illustrated. The ruins at Angkor are identified as well.

The Mandarin Route, or route mandarine is a road that traverses nearly the entire length of modern-day Vietnam, part of which corresponds with today’s Vietnam Route 1. Curzon, in his paper entitled ‘Journeys in French Indo-China (Tongking, Annam, Cochin China, Cambodia) describes the Mandarin Route as follows:

This route, which has existed in some form or other from early times, was entirely reconstructed at the beginning of the present century from Saigon, the capital of Cochin-China, to Langson on the Chinese frontier, by the Emperor Gia Long, the founder of the reigning dynasty and of a reunited Annamite Empire. In Annam it usually runs at a slight distance from the coast or traverses the lower spurs of the mountains.

Our research indicates that the term route mandarine evolved due to the road’s use as a trading route with China, whom the Nguyễn dynasty referred to as Mandarins, and because it was constructed by Lê Văn Duyệt, a Mandarin Viceroy under Nguyễn Emperor Gia Long.

This map was created by William Shawe and it is a reduced version of a larger map created by members of the Pavie Mission for the French Minister of Foreign Affairs. It was published by the Royal Geographical Society to accompany a paper by George Nathaniel Curzon, M.P. entitled, ‘Journeys in French Indo-China (Tongking, Annam, Cochin China, Cambodia) in the September 1893 edition of The Geographical Journal. This map is not catalogued in the OCLC and is rarely seen on the private market.

Very good. Light wear and toning along original fold lines. Blank on verso.
Looking for a high-resolution scan of this?