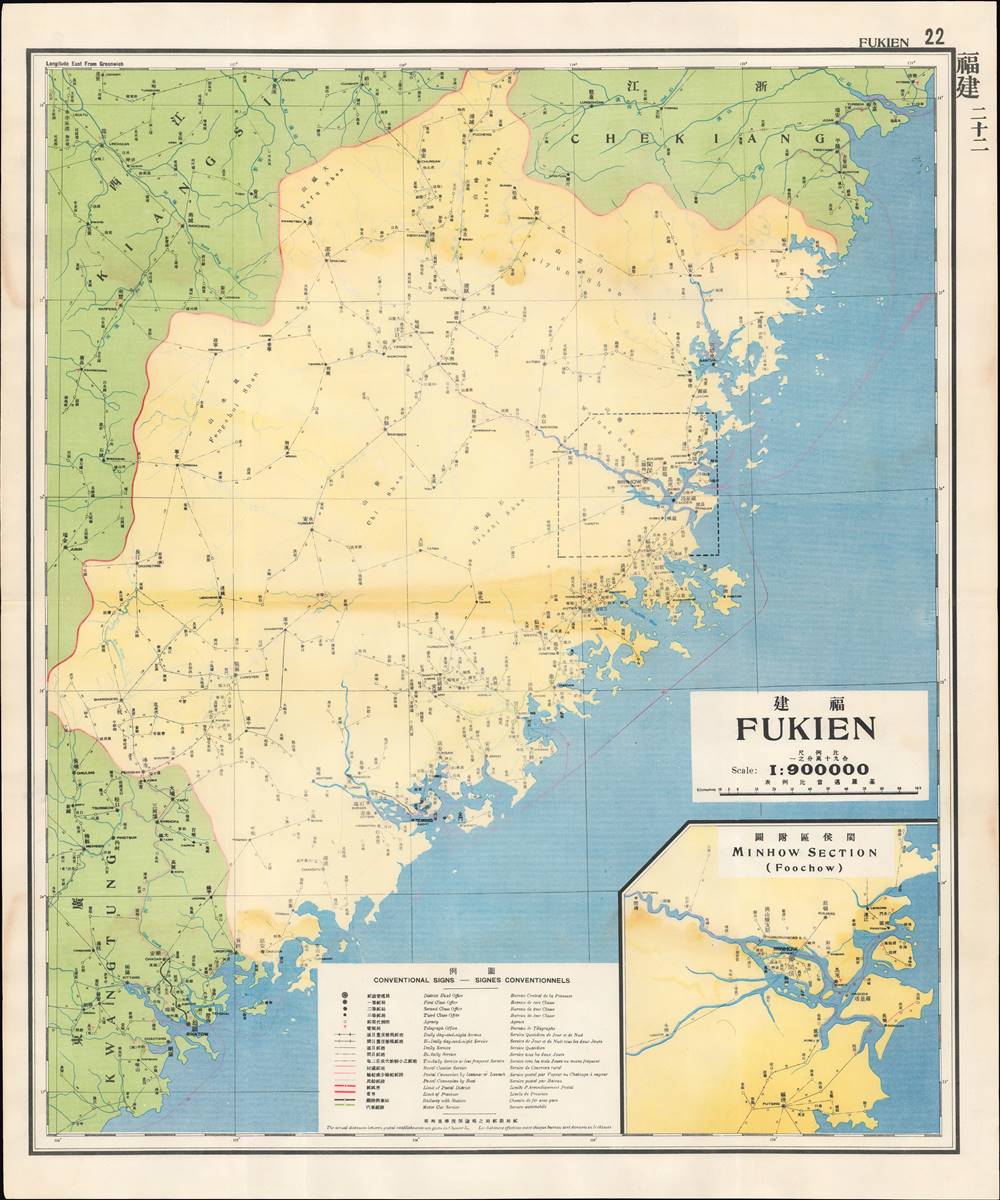 Postal infrastructure as a reflection of China's modernization.
$350.00

This is a map of Fujian (Fukien) Province from the 1933 edition of The Postal Atlas of China (中華郵政輿圖), compiled by Charles Jacot-Guillarmod. It illustrates the evolving postal infrastructure of the region, reflecting a broader modernization drive by the Nanjing government.

This map is the twenty-second in the atlas' series. The markings indicated in the legend give a great deal of information about the postal and transportation infrastructure in China at this time, including presenting the frequency of service along various routes. The numbers along the routes represent distances in Chinese li (里), equivalent to roughly 500 meters.

Fujian has historically been one of China's main gateways to the outside world, especially Xiamen (here as Szeming or Amoy) and nearby Quanzhou (here Tsinkiang, 晋江). Large numbers of Overseas Chinese in Southeast Asia and elsewhere can trace their origins to Fujian. As a coastal province with a population skilled in trade and navigation that is also mountainous inland, Fujian has historically posed problems for central administrators, particularly those looking to restrict trade and migration. The same year this map was published, a group of generals sent by Chiang Kai-Shek (1887 - 1975), leader of the national government in Nanjing, to suppress Communists instead negotiated with the rebels and formed a (short lived) independent leftist government.

At bottom-right is an inset map of Fuzhou (or Foochow, here also as Minhow 閩侯), which was one of the first five treaty ports in China opened by the Treaty of Nanjing (1842). Although it did not match Guangzhou or Shanghai in wealth and size, Fuzhou did become a magnet for capital, labor, and commerce as a result, as well as one of the most successful mission fields for Anglo-American Protestant missionaries.

France had a special interest in Fuzhou, as French naval officers (acting independently) had helped establish the Foochow Arsenal, one of the main modernization projects of the late Qing. France also attempted to colonize nearby Taiwan in the late 19th century and won a major naval engagement in1884 against the very navy its officers had helped build. After Japan's colonization of Taiwan in 1895 following the First Sino-Japanese War, Fujian came under increasingly strong Japanese influence.

After the purging of Communists, Chiang established a new national regime in Nanjing. In the decade that followed, despite weak authority, civil war, a Communist insurgency, and an incremental Japanese invasion of northern China, the Nanjing Government and the Guomindang were able to build something akin to modern, functioning bureaucratic state, particularly in the Lower Yangzi Delta around Nanjing and Shanghai, and successfully completed a range of hallmark infrastructure and modernization projects. Nevertheless, full-scale war with Japan in 1937 derailed these efforts, leading ultimately to Chiang's retreat to Taiwan and the Communist takeover of mainland China.

Good. Dampstaining along central fold line and sporadically throughout, especially towards top.