1784 Tiefenthaler Map of the Ganges and Ghaghara Rivers, India 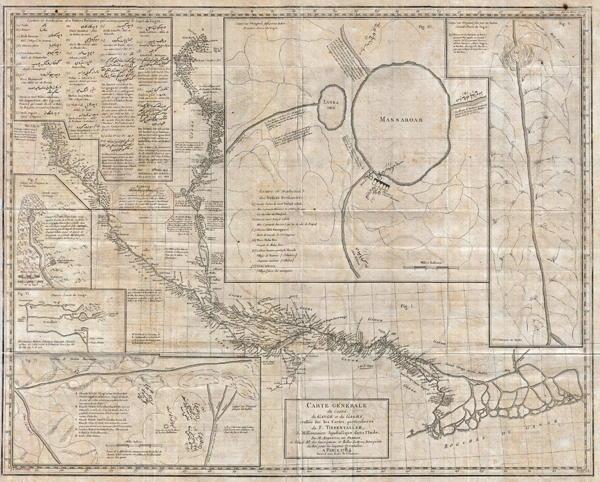 1784 Tiefenthaler Map of the Ganges and Ghaghara Rivers, India

A rare and remarkable discovery this is Joseph Tiefenthaler and Anquetil-Duperron's important 1784 map of the Ganges and Ghaghara (Karnali) river system. As a whole this map is a significant advancement over earlier mappings of this region as evidenced in the works of De L'Isle and others. Presented here are actually six maps on a single sheet. The central map (Fig. 1), showing the entire course of the Ganges and the Ghaghara rivers, is a European style map produced by Tiefenthaler based upon his own travels and quadrant surveys as well as on the indigenous cartography he collected along the way. Four of the five smaller maps presented are in fact Tiefenthaler's copies of Indian maps given to or provided for him. The stylistic difference between these and the central European style map are clear, especially as regarding the rendering of direction, bodies of water, and topography.

Tiefenthaler's copies of indian cartographic material include figures II, III, IV, and V. Figure II correctly locates the source of the Ganges at the Gangotri Glacier, Gaumukah, known as the 'Cow's Mouth' due to its strong resemblance to the open mouth of a cow. Figure III, a large map at the top center, focuses on the Lake of Mansarovar (Mansaroar), the supposed source of the Karnali or Ghaghara River. It is unlikely that Tiefenthaler actually ever say Mansarovar as this lake is located high on the Tibetan Plateau which, during this historic period, was closed to foreigners. Figure IV is another Indian chart focusing on the secondary sources around the volcano of Doulou Bassandar. Figure V shows a secondary source for the Ghaghara as it runs through the Himalayas. Figure VI depicts earlier misconceptions regarding the source of the Ganges as suggested by P. Souciet in his 1729 four volume work Observations, Mathematical, Astronomical, Geographica, Chronological, and Physical.

One of the most striking elements of this map is the inclusion of Pesian text in each of the maps Tiefenthaler claims to have copied from indigenous sources. These text blocks are vaguely transliterated and translated into French in a table in the upper left quadrant. The is the only European map of India we are aware of to incorporate Persian text.

Most of the cartographic work that led to this map was completed by Tiefenthaler in India. Tiefenthaler, near the end of his life, forwarded it to his friend and fellow orientalist Anquetil-Duperron, living at the time in Paris. Duperron, a noted orientalist, compiled Tiefenthaler's research and sketches into this important independently issued map. Though significant in its time this map is little known by modern cartographic historians who, when discussing the mapping of India, tend to focus on the later work of Rennell.

Joseph Tiefenthaler (or Tieffenthaler or Tieffentaller) (August 27, 1710 - July 5, 1785) was a Jesuit missionary and geographer active in India during the latter half of the 18th century. Tiefenthaler is considered to be India's forgotten geographer because his significant cartographic achievements in India are often given second place to Rennell's slightly later work. Tiefenthaler was born in Tyrol, then a province of the Austrian Empire. As a young man he studied in Spain before joining the Jesuit order in 1729. The Jesuits sent Tiefenthaler to India where he was established as Rector of the Jesuit High School in Agra. In 1759 the Jesuit order was expelled from all Portuguese controlled areas in India forcing Tiefenthaler to flee to the north. Tiefenthaler proceeded to travel extensively in northern India eventually following the Ganges to Calcutta, which had just been established as a trading center. During his travels he dedicated himself to correcting the geography of the country. Using little more than a quadrant Tiefenthaler corrected the coordinates of countless cities and temples. Tiefenthaler eventually compiled his research into two insightful works, Descriptio Indiæ and Cursus Gangæ,. He also made liberal use of Indian cartographic knowledge and met with Indian geographers whenever possible. Nowhere is this more evident than in the reproductions of indigenous charts that appear in his second important work, Cursus Gangæ, which studies the course of the Ganges River to its sources. Tiefenthaler sent his most important cartographic work to the French orientalist and geographer A. H. Anquetil-Duperron who compiled and edited the manuscripts into to important publications, Recherches hist. et géogr. sur l'Inde and an independently issued map Carte général du cours du Gange et du Gagra dressée par les cartes particuliéres du P. Tieffenthaler. Tiefenthaler never returned to Europe and died in Lucknow, India, in 1785. He is buried at the mission cemetery in Agra. Learn More...


Abraham-Hyacinthe Anquetil Du Perron (December 7, 1731 - January 17, 1805) was a French orientalist and linguist active in India and France in the late 18th century. Duperron, as he is commonly known, was born in Pairs and educated for the priesthood in Utrecht. There he discovered a natural affinity for foreign languages and mastered Hebrew, Arabic, and Persian. Eventually Duperron decided that the priesthood was not for him and instead focused exclusively on oriental languages. His diligent attendance at the Royal Library attracted the attention of the keeper of the manuscripts who arranged for Duperron to receive a small salary as a linguistic scholar. In the Royal Library he chanced upon some fragmentary religious texts associated with Zoroaster. Inspired by the obscure religious works Duperron conceived a scheme that would take him to India in search of the full texts. With little funds for the voyage he was forced to enlist as a private soldier on an Indian expedition set to leave for the Orient. This proved unnecessary as Duperron's more influential associates were able to arrange for him to be discharged from military service, given a small salary, free passage to India, and even a seat at the captain's table. Duperron eventually spent seven years in India where he studied geography, language, law, culture, and antiquities. In time he did succeed in his quest to recover the works of Zoroaster and some even claim he mastered the Avesta language. War between England and France eventually lead to the expulsion of the French from the subcontinent and forced Duperron to return to Paris. He took with him some 180 oriental manuscripts and numerous other curiosities. In Paris he continued his orientalist studies and published a number of Latin and French translations of Indian religious texts including the Avesta and the Upanishads. One legacy of his time in India was his acquaintance with the Jesuit geographer and missionary Joseph Tiefenthaler. Tiefenthaler mailed Duperron his geographic works which he edited and eventually published as Recherches historiques et geographiques sur L'Inde. Duperron is also responsible for the compilation and editing of Tiefenthaler's important map of the Ganges and Gangra river systems, Carte général du cours du Gange et du Gagra dressée par les cartes particuliéres du P. Tieffenthaler. Duperron died in Paris in 1805. Learn More...