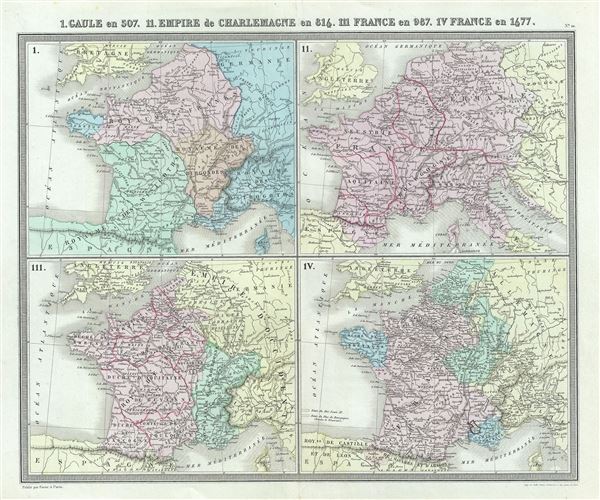 This is a fine 1874 map of Gaul or France by Ambroise Tardieu. Essentially four maps on a single sheet, it depicts Gaul or France during 507, 816, 987 and 1677. The first map, Gaul in 507 depicts the region from divided into territories of the Kingdom of the Wisigoths, Franks, Burgonde and Ostrogoths. The important Battle of Vouille between the Frankish King Clovis and Alaric II, the King of the Visigoths took place in 507 CE. It is arguably the turning point for France, when, with the defeat of the Visigoths, Gaul was left largely to the Franks, becoming Francia and when 'France began.'

The second map depicts the Empire of Charlemagne. After ruling and reforming France in 768, Charlemagne conquered Italy and, in 800, was crowned Holy Roman Emperor. For the next 14 years until his death, Charlemagne's Empire united much of Western and Central Europe for the first time since the collapse of the Roman Empire. The 'Carolingian Renaissance' witnessed a Catholic themed revival of art, religion, and culture, encouraging the formation of a common European identity.

This map was prepared by Ambroise Tardieu and issued as plate 10 in his 1874 edition of Atlas Universel de Geographie Ancienne et Moderne.