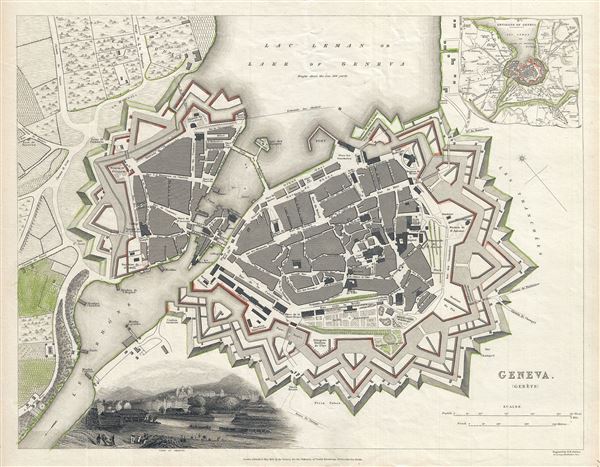 A desirable 1841 map or plan of the city of Geneva, Switzerland, prepared for publication by the Society for the Diffusion of Useful Knowledge, or S.D.U.K. It covers the city of Geneva in its entirety centered on the Rhone River. The southern portion of Lake Geneva is included. The city is depicted in splendid detail throughout, noting individual streets, buildings, rivers and parks. The bottom left quadrant of the map includes a beautifully illustrated view of Geneva. An inset of the Environs of Geneva is included in the top right quadrant. This map is engraved by B. R. Davies and published by the Society for the Diffusion of Useful Knowledge in 1834. Although the Society closed its doors in 1848, Subsequent reissues of the S.D.U.K. atlas were printed well into the 1870s by Chapman and Hall, who acquired the original plates.