1800 Stockdale Map or Plan of the City of Genoa, Italy 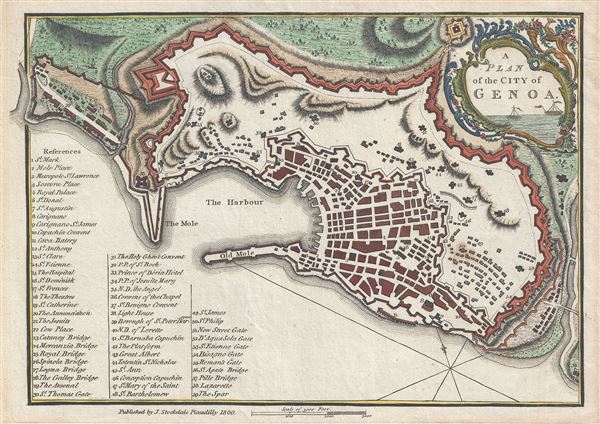 1800 Stockdale Map or Plan of the City of Genoa, Italy

This is an appealing 1800 map or city plan of Genoa, Italy, issued by John Stockdale. It beautifully depicts the coastal city and the capital of Liguria located in north western Italy. The map is exceptionally detailed, noting forts, bridges, gates, roads and a host of additional topographical features. The Old Mole (the battery for the defense of the harbor) and The Mole (New Mole) are noted here. The tower build on the New Mole is the one of the oldest standing structures in the world. Build in the 12th Century, the tower serves as a lighthouse to this day.

The Republic of Genoa, which before 1797 was an independent state became a French protectorate on Napoleon's demand. Leo Tolstoy, begins his famous novel War and Peace writes:

Genoa would eventually become part of the Kingdom of Sardinia in 1815, following the defeat of Napoleon. This map was published by John Stockdale in 1800.