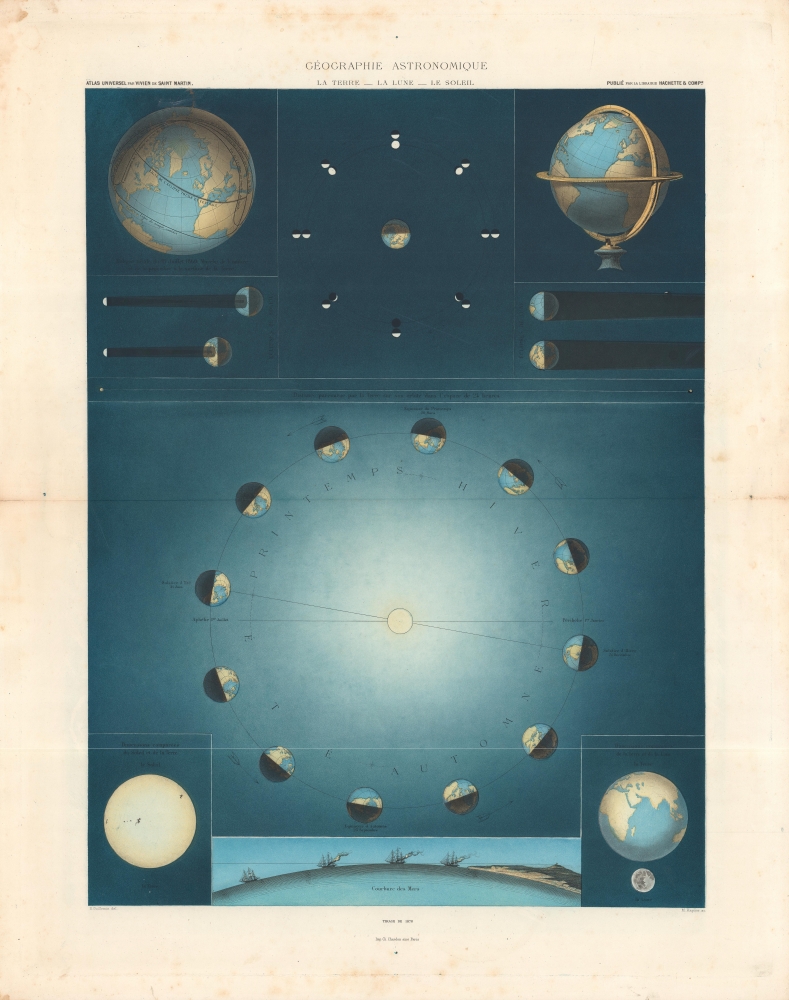 A gorgeous representation of the Earth, Moon, and Sun explaining the phases of the moon, the seasons, and more. This sheet appeared in Louis Vivien de Saint-Martin's 1878 Atlas Universel de Géographie…

The top portion of the sheet demonstrates the Earth's axis, eclipses and their paths across the Earth's surface, and the phases of the moon. The largest image, displaying the Earth in various stages of its revolution around the Sun, explains the seasons, with solstices and equinoxes noted. At bottom are illustrations depicting the relative size of the Earth, Moon, and Sun, along with a demonstration of the curvature of the Earth

These illustrations were drawn by E. Guillemin (possibly Emile Guillemin, later a famed sculptor, whose father Auguste was a painter), engraved by Maximilien Honoré François Rapine, and printed by Charles Chardon as part of Louis Vivien de Saint-Martin's Atlas Universel de Géographie…, published by Hachette in 1878. It is not independently cataloged in the holdings of any institution, while the entire Atlas Universel… is well represented in the collections of major research institutions in North America and Europe.

Louis Vivien, called Vivien de Saint-Martin, (May 17, 1802 - December 26 1896) was a 19th-century French geographer. Prolific and long lived, he had at least a dozen major titles to his credit, including an 1841 history of the French Revolution, an 1844 history of Napoleon, an 1873 history of geography, and (in partnership with Franz Schrader) his Atlas universal de géographique. Nothing has come down to us of his early years, but he was hailed during his lifetime: he was Honorary President of the Société de Géographie de Paris, member of the Royal Academy of Sciences in Berlin, and honorary member of the Royal Academy of Madrid. Learn More...


Charles Chardon (1832 - May 24, 1896) was a Paris, France, based printer and publisher active in the late 19th century. The firm was originally founded in 1818 by Chardon the elder on Rue Pierre-Sarrazin. Around 1835 he relocated to Rue Hautefeuille. In 1850 the firm was passed to Francois Chardon, his eldest son, and then in 1862 to Charles Chardon, his younger son. Charles relocated the firm to larger offices at 10, Rue de l'Abbaye. By 1880 Charles Chardon, from his office at 10 Rue de l'Abbaye, was promoting himself as a heliographic engraver - an early photoengraving technique of which he was an early adopter. Possibly because of his heliographic press, Chardon was contracted to produce numerous prints from drawings stored at the Chalcographie of the Louvre. Francois Chardon passed the firm to Charles Wittmann in 1890. Continuing in Chardon's tradition, in 1896 Wittmann become the director of the Louvre's Chalcographie. Learn More...

Good. Some wear along centerfold. Light foxing in top and bottom margin.