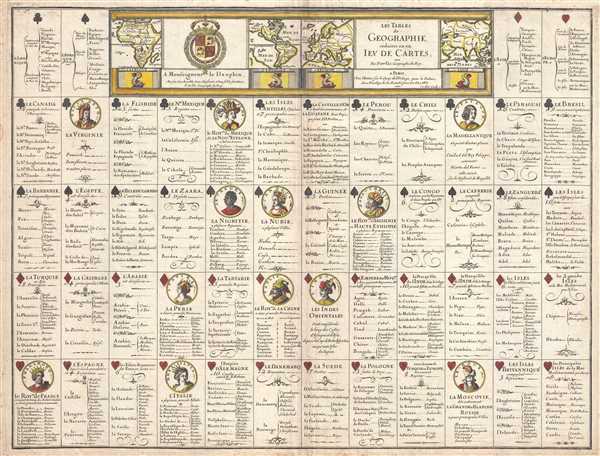 Illustrates California as an Island and makes an explicit textual reference to the same theory.

This is a 1669 Pierre du Val broadside of an uncut complete deck of fifty-two playing cards. Akin to a conventional deck of cards, each of the four traditional suits corresponds with a continent: clubs for the Americas (both North and South), spades for Africa, diamonds for Asia, and hearts for Europe. Each of the aces lists the countries, regions, and empires within each continent that are described on each card. The face cards (kings, queens, and jacks) each bear the portrait of a different leader, which, in some cases, is nothing more than a caricature derived from stereotypes. Some of the leaders, like Montezuma and Pharamond (King of the Franks in the 8th century) are figures straight out of legend and myth in the eyes of Europeans, whereas Queen Elizabeth I is illustrated on the card for Virginia, and she was very much revered as a powerful ruler.

Each card, no matter its value, bears some text that imparts some knowledge about that card's country or region. For example, the eight of clubs is entitled Le Canada (Canada) and lists the '8 principle European colonies'. Six of the eight colonies, La Nouvelle France, La Nouvelle Bretagne, L'Accadie, La Nouvelle Angleterre, La Nouvelle Holande, and La Nouvelle Suede also have settlements attached to them, which include Boston, Manhattan (Manhatte), Montreal, and Port Royal. A decorative title cartouche is situated along the top border and includes illustrations of Africa, the Americas, Europe, and Asia. It is worth noting that, in the map of the Americas, California is depicted as an island and, on the New Mexico card (le Nouveau Mexique), which is the three of clubs, California is referred to as an island.

This set of cards was engraved by Robert Cordier and published by Pierre du Val in 1669.

Pierre Du Val (May 19, 1619 – September 29, 1683) was a French cartographer and publisher active in Paris during the middle part of the 17th century. He was born Abbeville, Picardie, France, where his father, also Pierre, was a merchant, consul, and alderman. His mother was Marie Sanson, sister of Nicolas Sanson d'Abbeville (1600-1667), the leading French cartographer of his day. Du Val and probably apprenticed in Sanson's workshops. Afterwards, in Paris, he studied geography under Jean-Baptiste Gault, who later became the Bishop of Marseilles. He counseled M. Henri of Savoye, abbot of St. Sorlin, and M. Gilles Bouraut, bishop of Aire and later Evreux, in matters of science and geography. Du Val became Geographe ordinaire to Louis XIV in 1650. His first atlas, the 1654 Cartes Geographiques Methodiquement Divisees, contained few of his own maps and was mostly compiled from reissues of maps by other cartographers. His early work focused on atlases and geographical treatises, but later, he turned his attentions to large separate issue, often multi-sheet maps. After his death in 1683, his widow, Marie Desmaretz, continued his business at least until 1684, after which it passed to his daughters (either Marie-Angelique or Michelle), who published until at least 1688. Learn More...