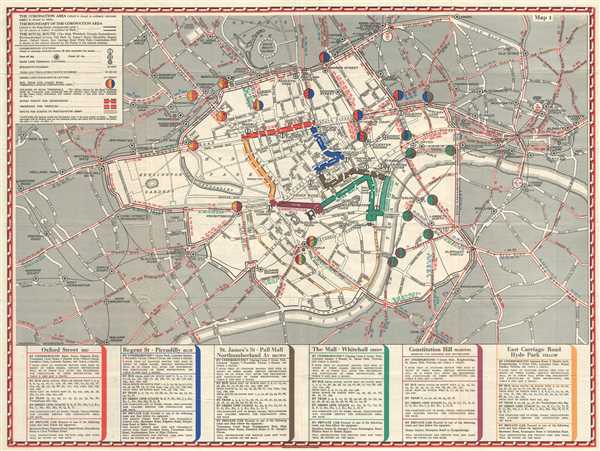 Distributed free to attendees to give them a better idea of how to reach the Royal Route.
$200.00

This is a 1937 city map or plan of London illustrating how well wishers and other attendees could best attend the Coronation of King George VI of Great Britain. The map depicts London from the now closed Uxbridge Road Underground Station (it was on the Metropolitan Line) to Tower Bridge and from Regents Park to the Borough of Lambeth and the Oval Underground station, which is on the Northern Line. Through the presentation of clear, concise information, directions concerning how to reach the Royal Route are presented. Each colored section represents a part of the Royal Route and correspond to the colors that would be used by buses, trams, and Green Line coaches to easily display for passengers their destination. The part of London each color encompasses is explained in explicit detail on verso, allowing potential attendees to decide where they would like to watch the procession and how best to arrive at their proposed destination. Only pre-arranged private traffic would be allowed into the Coronation Area (the white area on the map) and no superfluous deliveries, etc., would be allowed in. Bus, tram, and Green Line coach routes are labeled in different colors and different symbols are used for Underground stations, so riders can are informed which stations will be open, restricted, or closed for the day. A more detailed Underground map is printed on verso, along with detailed directions of how to get to the Royal Route.

This map was published by Geographia and freely distributed in advance of the Coronation of King George VI on May 12, 1937.