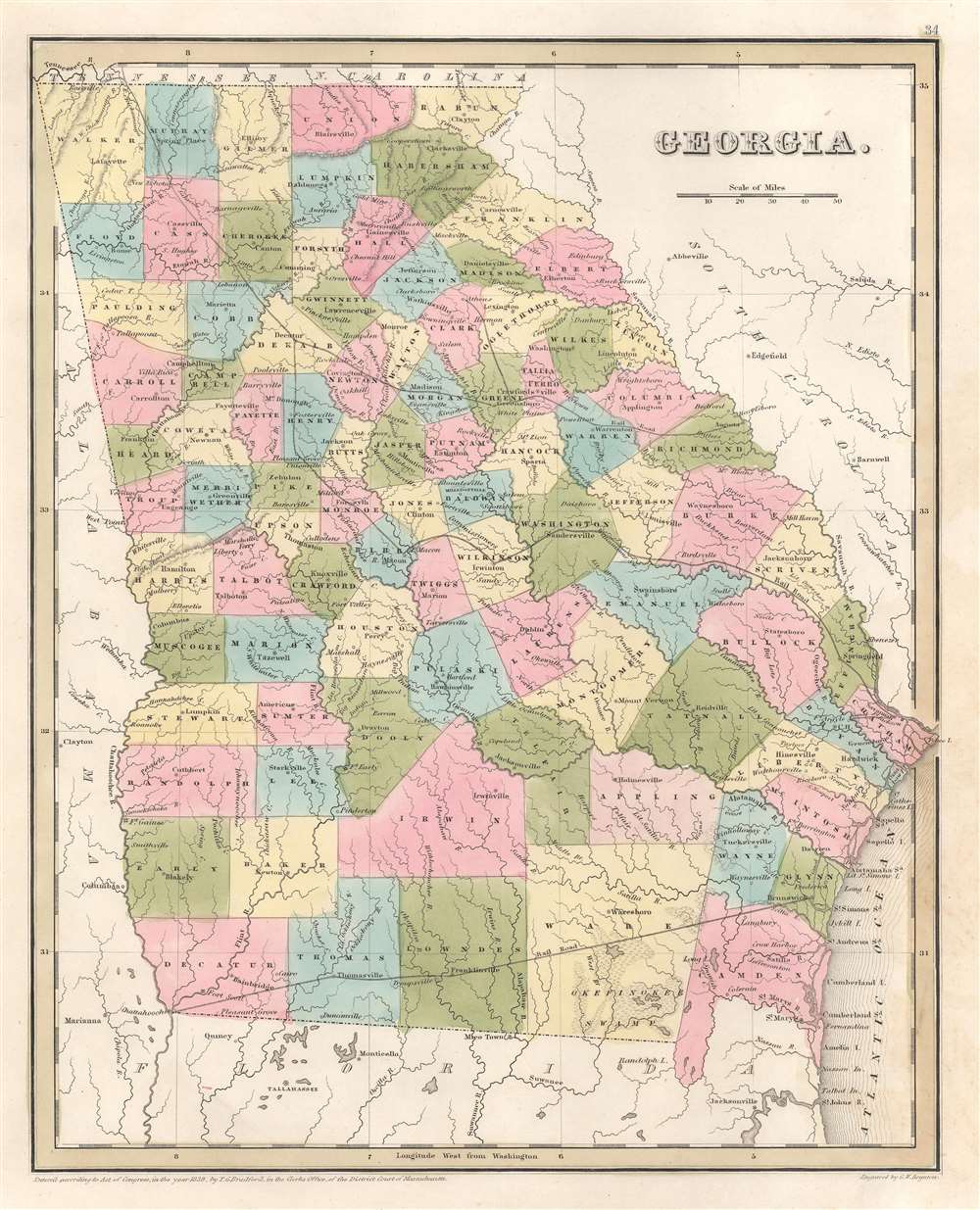 This is an 1838 Thomas G. Bradford map of Georgia. Numerous cities and towns are labeled, including Savannah, Augusta, Athens, Marietta, and Decatur. Atlanta was not incorporated until 1847. Railroads played an important role in Georgia's history in the late 1830s and 1840s, with several major railroad lines operating within the state. The Central of Georgia Railway operated between Savannah and Macon, the Macon and Western Railroad ran between Decatur (Decatur becomes Atlanta) and Macon, and the Georgia Railroad operated between Athens and Augusta.

Bradford, T. G. and Goodrich, S. G., A Universal Illustrated Atlas, exhibiting a Geographical, Statistical, and Historical view of the World, (Boston: Charles D. Strong) 1838.     The Universal Illustrated Atlas is one of the great American atlases of the first half of the 19th century. The atlas was first published in 1838 under the imprint of Charles D. Strong. It replaced and superseded Bradford's earlier smaller format Illustrated Atlas, Geographical, Statistical, and Historical, of the United States and yhe Adjacent Countries. Numerous reissues of the Universal Illustrated Atlas followed until about 1847. Although there are minor variations between the editions, most contain about 50 maps, the majority of which focus on the United States. Bradford's atlases are significant for recording North America during the Republic of Texas Era. In later editions, particularly the 1846 edition, Bradford illustrates the boom in railroad construction, possibly with the idea that his maps would aid travelers in planning journeys by rail. It was compiled by Thomas Gamaliel Bradford and Samuel Griswold Goodrich with most of the plates engraved by G. W. Boynton. Other contributors include Thomas Gordon (1778 - 1848), Fielding Lucas Jr. (1781-1854), Samuel Edward Stiles (1844 - 1901), Sherman and Smith (fl. c. 1829 - 1855), and Horace Thayer (1811 - c. 1874).