1863 Johnson Map of Georgia and Alabama 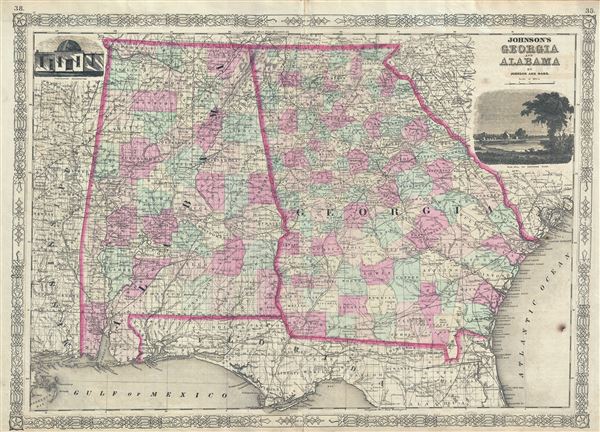 1863 Johnson Map of Georgia and Alabama

This is a beautiful example of Johnson and Ward's 1863 map of Georgia and Alabama. Offers a fascinating snapshot of these Confederate states during the American Civil War. The map shows both states in full with color coding according to county. Engraved decorative views of 'Tuscaloosa Observatory' and a 'Rice-Mill on Savannah River' decorate the upper left and right hand quadrants respectively.

In the early years of the Civil War the Confederate leaders considered Georgia and Alabama, which were well isolated from Union armies, relatively safe from attack. The region consequently became a breadbasket for the Confederacy, providing food and ammunitions to forces further north in the Virginia theater. William T. Sherman's Atlanta Campaign of 1863 finally brought the war to Georgia. Sherman's March to the Sea devastated the state's plantation economy and limited its capacity to supply the Confederate Armies, contributing to their ultimate surrender in 1865.

The map features the fretwork style border common to Johnson's atlas work from 1863 to 1869. Printed by Johnson and Ward as plate nos. 38-39 in the scarce 1863 Civil War edition of Johnson's Family Atlas.