1861 Mitchell Map of Georgia and Alabama 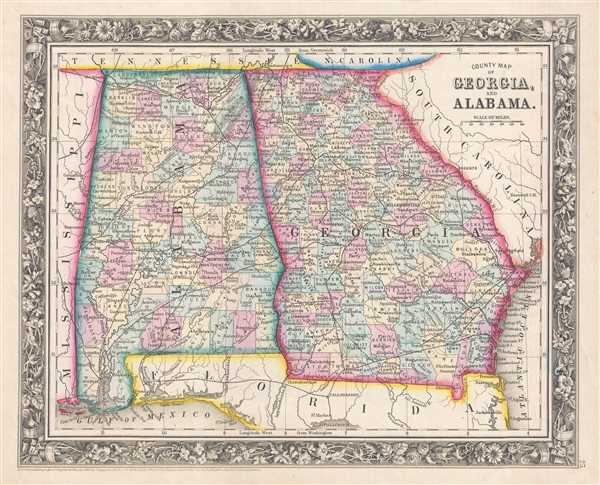 1861 Mitchell Map of Georgia and Alabama

Illustrates the vital rail network in Georgia that supplied the Confederate war effort.

Georgia and the American Civil War

Three years after this map's publication, the city of Atlanta lay in ruins, burned to the ground by General Sherman's army in order to deprive Confederate armies of any support that it could offer. Atlanta had played a key role in supporting the Confederate war effort, bustling city full of factories that produced cannons, pistols, swords, uniforms, leather goods, and even iron plating for the Confederate Navy Ironclads. Atlanta was also a major transportation hub, with several railroads converging in the city, such as the Western and Atlantic Railroad, which connected Atlanta and Chattanooga, Tennessee, the Georgia Railway, which operated between Atlanta and Augusta, the Macon and Western, which operated between Atlanta, Macon, and Savannah, and the Atlanta and West Point Railroad, which connected Atlanta and West Point, Georgia. At West Point, a connection was made with the Western Railway of Alabama, which linked Atlanta to Montgomery. These four railroads are illustrated here, although are labeled. All of these factors led to the Union's desire to capture the city and end the support it provided for the Confederate army. Sherman's capture of Atlanta in September 1864 also proved to be a vital victory in the war and one of the deciding factors in President Lincoln's electoral victory in the election of 1864 in November.