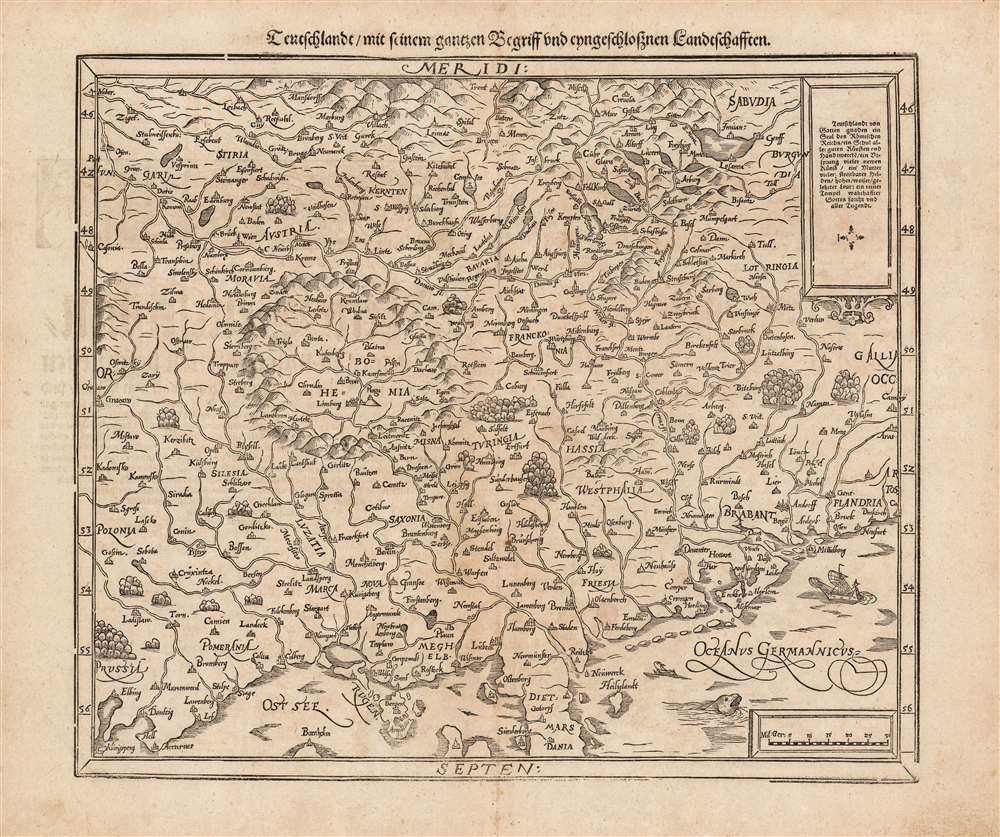 This is the modern map of Germany from Sebastian Petri's updated edition of Münster's Cosmographia. It was added by the publisher toCosmographia in 1588, to replace the map which had first appeared in Münster's work in 1540, which over the course of almost fifty years had become supplanted by the more modern and detailed map printed by Ortelius. Indeed, most of the maps which Petri caused to be made for Cosmographia were reduced-format, woodcut versions of Ortelius' copperplate maps, an acknowledgement of their superiority to the older Münster maps. In this respect, the present map stands out: while some of its features reflect Ortelius' work, the overall composition of the map - especially its southern orientation - are more reflective of the original Münster map: perhaps evoking the sentiment that a German could make a better map of Germany than the Flemish Ortelius.

The southern orientation which distinguishes Münster's 1540 map of Germany as well as Petri's replacement here, was neither an error, nor a regression, nor a touch of whimsy. It was an indication of the map’s modernity. The convention of keeping north at the 'top' of a map was inherited from Ptolemy's maps, and those which Münster produced based on Ptolemaic sources retained that second-century geographer’s northern orientation. However, regional maps printed in Germany in the first part of the 16th century for the use of travelers were oriented to the south in order to be used in conjunction with a solar compass. Since these represented Munster’s most accurate and detailed modern sources, his maps derived from them virtually all shared the same, southern, orientation. Münster's adherence to a southern orientation derives from his study of Martin Waldseemüller (1470 - 1520), and Erhard Etzlaub (1455 - 1532) before him.

This map was among the newly-produced woodcut maps added to the German edition of Cosmographia in 1588 by Sebastian Petri, who had inherited the print shop from his father Heinrich Petri. It remained in the subsequent editions without material change. The present example corresponds, both typographically and with respect to cracking on the woodblock, with the map found in the 1628 German edition. The German and Latin editions of Cosmographia are well represented in institutional collections. Three examples of different editions of the separate map are cataloged in OCLC; one of these is of this edition, at the Herzogin Anna Amalia Bibliothek Klassik.

Münster, Sebastian, Cosmographey, das ist Beschreibung aller Länder..., (Basel: Petri) 1628.     The Cosmographia Universalis, one of the greatest geographical and historical works of the 16th century, 'taught nearly three generations of laymen most of what they knew about the world beyond their native places' (Strauss). Filled with maps, views, and rich descriptions of places throughout Europe and beyond, it was the best general source of geographical information until the advent of Ortelius' Theatrum. It was first issued by Sebastian Munster (1488 - 1552) in its 1544 German edition, and stayed in print long after its author's death in thirty five editions, and in five languages. (Of these, the 1550 and 1552 editions are widely regarded as the most complete and truest to the author's intentions: thereafter, later editors continued to add to the work's text; editions from 1588 onwards employed an entirely different set of maps produced on Ortelius' model.) Munster's goal, initially, was to rally his homeland's humanists and scholars to produce a new map of Germany in order to 'see what kind of a land our ancestors conquered for their home... bring honor to our country and place its beauties in the clear light of day.' Munster's project quickly expanded to cover the known world in its scope to produce a 'sufficiently large volume, in which I touch upon the foundation of all nations and kingdoms, their peculiarities, rivers, mountains, customs of men, royal successions, origins of the more important cities, succinct histories, religions, characteristics and fertility of lands... in Germany, however, I tarry a little longer.'.