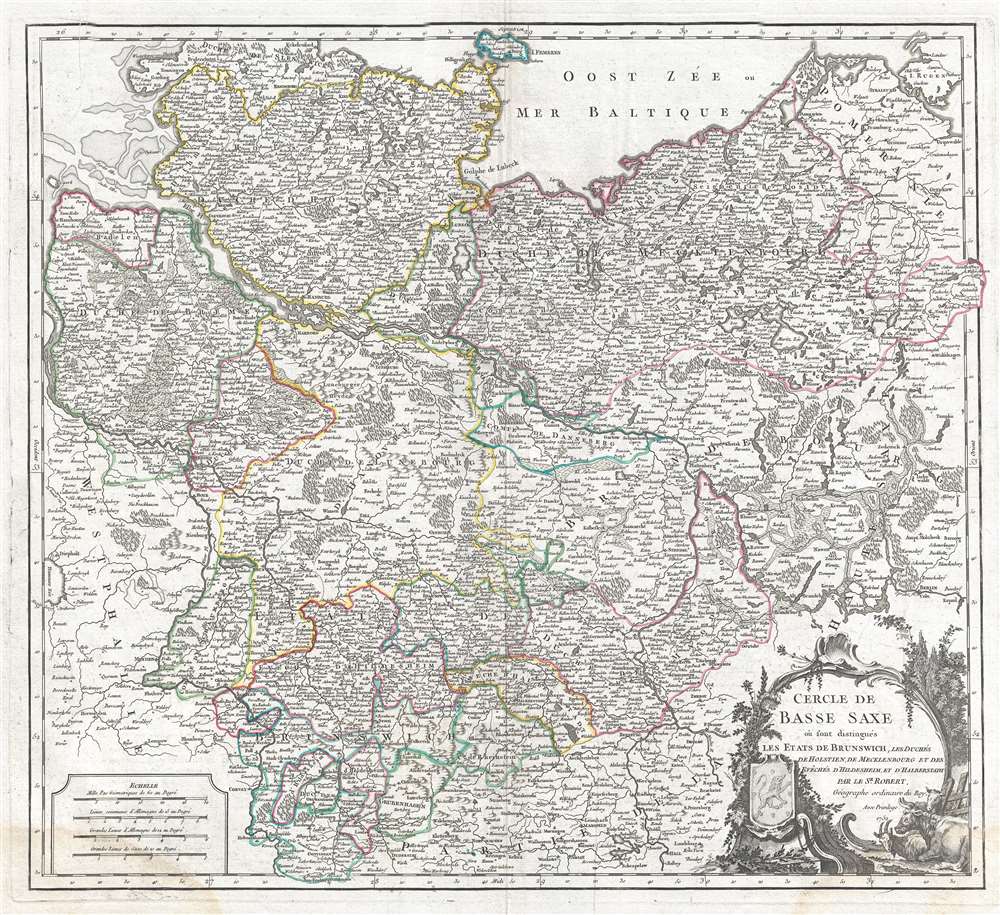 This is a 1752 Robert de Vaugondy map of Germany. The map depicts the northern part of modern-day Germany from Sleswick south as far as Hall and from Bremen east as far as Berlin, including the circle of Lower Saxony and the states of Brunswick, Holstein, Dutchies of Mecklenburg and bishoprics of Hildesheim, and Halberstadt. The whole is superbly detailed and notes numerous towns, rivers, cities, and a host of additional topographical features. A beautifully engraved title cartouche adorns the lower right quadrant of the map with a coat of arms surrounded by floral ornaments and animals.

This map was created by Robert de Vaugondy and published in 1752 edition of the Atlas Universel. The Atlas Universel was one of the first atlases based upon actual surveys. Therefore, this map is highly accurate (for the period) and has most contemporary town names correct, though historic names are, in many cases, incorrect or omitted.

Robert de Vaugondy, G. Atlas Universel, (Paris: Antoine Boudet) 1752.     The Atlas Universel was the crowning glory of the Robert de Vaugondy firm's atlas production. The atlas was revolutionary on many levels and exemplified the Vaugondy creedo commode, complet, univorme, et suive (convenient, complete, uniform, and easy to use). The atlas thus consisted of a wide corpus of maps, both modern and historical, was of moderate height and width, and featured maps of uniform style and structure. They partnered with Antoine Boudet, a shrewd businessman and publisher with whom they had worked previously, to produce the first edition. To minimize his fiscal risk, Boudet sold the atlas first by subscription using a large prospectus, receiving in the process over 1100 pre-orders. The first edition appeared in 1757 and contained beautifully produced maps with elaborate freshly designed allegorical cartouche work, generally by Pierre-Edme Babel, Pierre Philippe Choffard, and Charles Nicholas Cochin. Most of the maps were engraved by the Delahaye firm, the payment for whose services ultimately led to legal disputes. Despite proving a popular work of astounding quality, the Atlas Universal received harsh criticism from fellow cartographers, particularly Philipppe Buache. Ever at odds with the Vaugondys, Buache's critical perspective may have been influenced more by political maneuvering than academic affront. The atlas was issued in multiple editions between 1757 and 1788. Later editions, issued after 1786, were taken over by Charles Delamarche, who inherited the Robert de Vaugondy firm and assumed Boudet's publication rights.