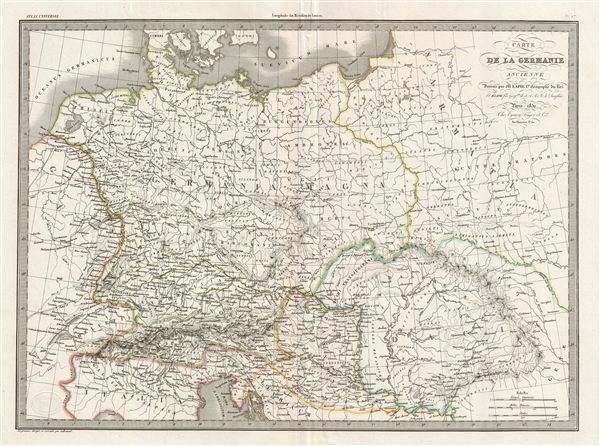 A fine first edition example of M. Lapie's 1830 map of Ancient Germany. Centered on the Roman Germania, the map covers the lands of the Germanic peoples prior to the fall of the Roman empire. At the time Germania was a name given to the lands between the Alps and the Baltic Sea. The region was inhabited by mainly by Germanic, but also Celtic, Baltic, Scythian, proto-Slavic peoples. Caesar Augustus described the Germanic tribesmen north of the Roman empire as extremely savage and a threat to Roman Gaul to be conquered. His Roman Legions, led by generals Germanicus and Tiberius, conquered Germania Magna to the River elbe, and occupied it until the Romans were defeated at the Battle of the Teutoburg Forest, in 9AD. The Romans withdrew, establishing the Rhine and the Danube Rivers as Germanic boundary of the Roman empire.

Tacitus wrote in Germania in 98 BCe:

This map was engraved by Armand Joseph Lallemand as plate no. 07 in the first edition of M. Lapie's important Atlas Universel. This map, like all maps from the Atlas Universel features an embossed stamp from the Lapie firm.