1835 Bradford Map of Germany and Switzerland 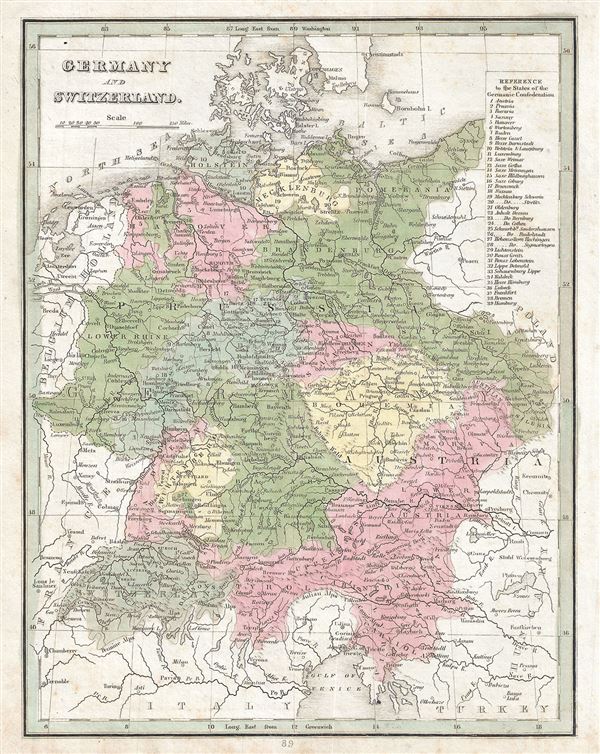 1835 Bradford Map of Germany and Switzerland

This is a fine 1835 map of Germany and Switzerland by the important American mapmaker T. G. Bradford. It covers the Germanic Confederation from the Baltic Sea and Holstein south to the Gulf of Venice and includes the modern day nations of Switzerland, Germany, Austria, Czech Republic, Poland, Slovenia and Luxembourg. A table along the right margin lists the states comprising the Germanic Confederation. Towns, rivers, mountains and various other important topographical details are noted. Elevation throughout is rendered by hachure and political and regional territories are color coded.

After the defeat of Napoleon in 1815, the Congress of Vienna created The German Confederation to coordinate the economies of these separate but culturally related German-speaking countries. The Confederation acted as a buffer zone between Austria and Prussia, the two largest and most powerful member states. Nonetheless the rivalry between the two powerful states increased until it finally broke out into the Austro-Prussian War. Prussia won the Austro-Prussian War in 1866 which ultimately led to the collapse of the German Confederation. A few years later, in 1871, most of the former Confederation states were folded into the newly proclaimed German Empire.

Switzerland had just undergone a rapid social and economic change known as the Regeneration Movement. Following the French July Revolution in 1830, the Swiss began assemble and call for fair representation and new Cantonal constitutions. Many of the cantons subsequently established representative governments and instituted freedom of the press and trade.

The map was published as plate no. 89 in Thomas G. Bradford's 1835 Comprehensive Atlas Geographical, Historical and Commercial.  Bradford's atlas, published in 1835 was an important work on many levels.  First, it was one of the first American atlases to follow an encyclopedic format, offering readers extensive geographical and statistical tables to supplement the maps themselves.  Second, it was published in Boston and influenced the city's rise as a publishing center later in the 19th century (at the time most publishing in the United States was restricted to New York and Philadelphia).  Third, this atlas was the first to contain a separate and specific map showing the Republic of Texas.  Fourth and finally, Bradford's atlas in some instances broke the Euro-centric mold regarding atlas production.  Among other things, Bradford focused his atlas on the Americas and abandoned the classical decoration common in European atlases in favor of a more informational and inherently American approach.