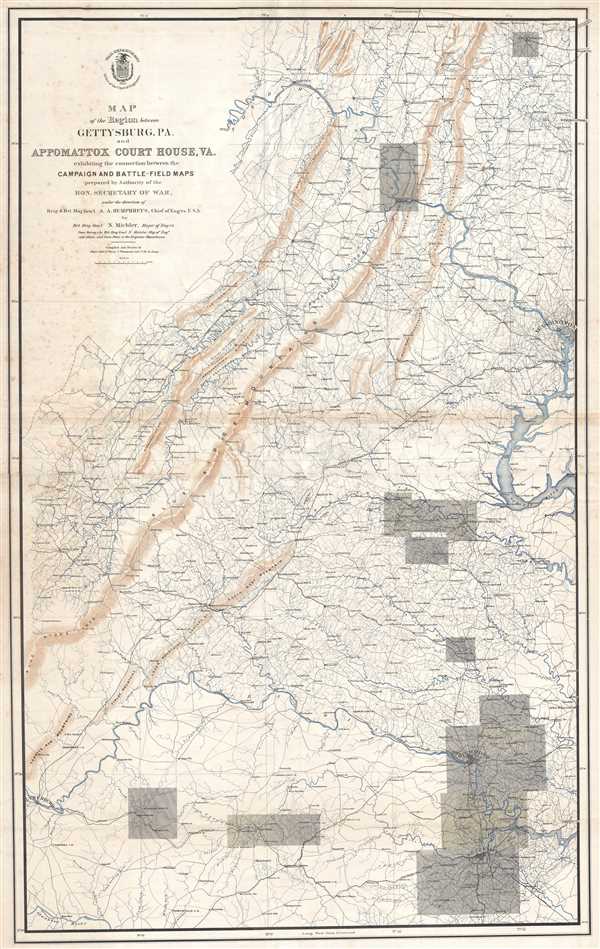 Highlights the areas in which major battles were fought between 1862 and 1865 - including Gettysburg, Antietam, and the Siege of Petersburg.

This is an 1869 separate-issue Nathaniel Michler map of the eastern United States stretching from Pennsylvania to Virginia marking the locations of major battles during the American Civil War. The map depicts the region from Lynchburg, Virginia to Washington, D.C. and from Chambersburg, Pennsylvania to just south of Petersburg, Virginia.

One of the more compelling features of this map is how it renders apparent the close proximity of so many of the major battles of the war. The Battles of Chancellorsville, Fredericksburg, the Wilderness, and Spotsylvania Court House all took place in the same general area, near the confluence of the Rappahannock and Rapidan Rivers. The map, however, does not indicate the dates of each of the battles it cites, creating a certain amount of ambiguity.

Highly detailed, myriad cities, towns, and villages are labeled throughout the region, imbuing a sense of the closeness and even entrapment citizens of the region must have felt during the war, with armies constantly marching in every direction. Roads are railroads are illustrated, including an unfinished railroad depicted leaving Fredericksburg. Creeks and rivers are noted throughout, as are several mountains and mountain ranges, including the Blue Ridge Mountains.

This map was compiled and drawn by John E. Weyss, John de la Camp, and C. Thompson under the direction of Nathaniel Michler and published by the War Department in 1869.

Nathaniel Michler (September 13, 1827 - July 17, 1881) was an American military officer and mapmaker who served during the American Civil War. Born in Easton, Pennsylvania, Michler attended West Point, from which he graduated seventh in his class. Commissioned as a 2nd Lieutenant in the Topographical Engineers, Michler participated in the Mexican Boundary Survey from 1851 until 1857, when he was transferred to serve as the chief topographical engineer in surveys for a proposed canal from the Gulf of Darien to the Pacific Ocean from 1858 until 1860. He held the rank of Captain at the outbreak of the American Civil War and served with the Army of the Cumberland from 1861 - 1863, then was transferred to the Army of the Potomac and built defensive works for the Union Army at the Battles of the Wilderness, Spotsylvania, Cold Harbor, and Petersburg. He was promoted to Colonel in August 1864 and brevetted Brigadier General in April 1865. After the war, Michler served as superintendent in the District of Columbia until 1871 and from 1872 to 1875 was chief engineer with the General Commanding Division of the Pacific. He acted as military attaché for the United States Legation in Vienna, Austria from 1878 to 1880. Learn More...


John E. Weyss (1820 - June 24, 1903) was an Austrian-American illustrator, cartographer, and engineer. Born in Vienna, Weyss immigrated to the United States in 1848 and settled in New York. He served as a member of the U.S. Government's Mexican Boundary Survey (1849 - 1855), led by Major William Hemsley Emory, because of his training as an illustrator. In the capacity of a civilian artist working for the army, Weyss contributed several illustrations for Emory's report, which was published in 1857-59. Weyss is also credited on eleven of the report's maps. At the outbreak of the American Civil War, Weyss held a position as a civil engineer for the state of Kentucky. Weyss received a commission as a major from the Governor of Kentucky and, due to his professional experience, was assigned to the staff of Captain Nathaniel Michler, the chief topographical officer in the Army of the Ohio. In this role he did survey work for maps of the vicinity of Shiloh and Corinth, both sites of major Civil War battles. Weyss then joined Captain Michler when he moved to the staff of General Rosecrans in late 1862, for whom they made a series of maps of the Battle of Stones River. Weyss and Michler were then transferred to the Army of the Potomac in May, 1863. One of Weyss's first assignments for the Army of the Potomac was a map of the vicinity of Harper's Ferry, Virginia, for which he produced a highly detailed map of the very complex topography of the region. Soon, Weyss was made responsible for the day-to-day detailed mapping during the siege at Petersburg. After the war, Weyss served as the principal surveyor under the direction of Michler during the creation of the atlas Military maps illustrating the operations of the armies of the Potomac and James, May 4th 1864 to April 9th 1865, that was published in 1869. Weyss served the U.S. Army Corps of Engineers for another twenty years, until he retired sometime in the 1880s. Weyss died on June 4, 1903, in Washington, D.C. Learn More...