1762 Lattré map of the Fortifications on Gibraltar 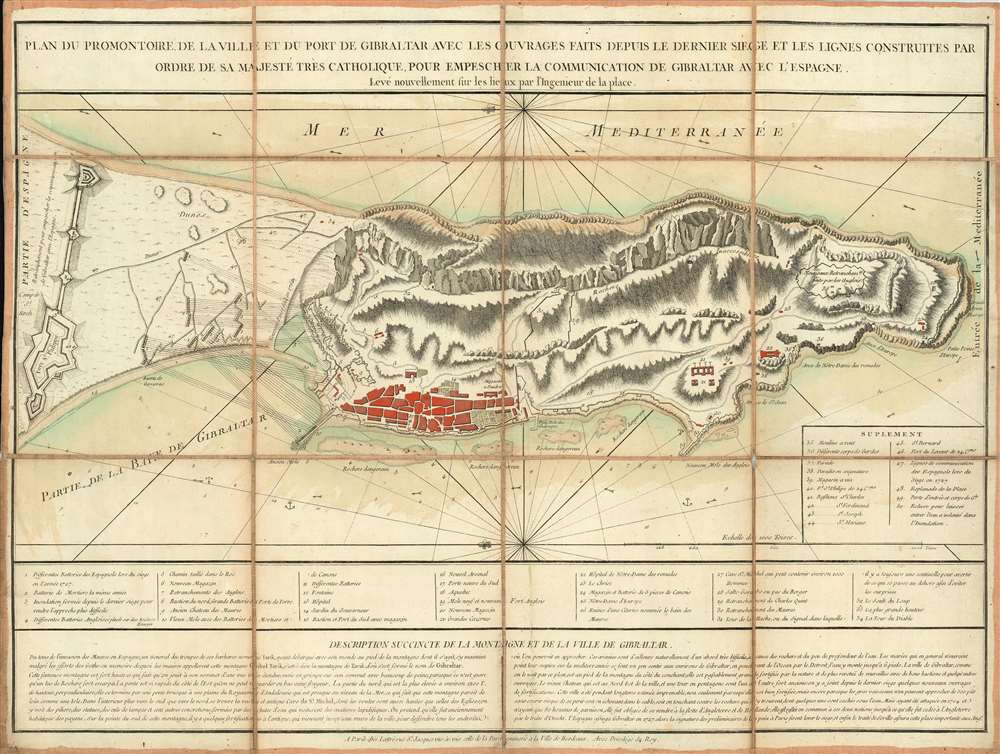 1762 Lattré map of the Fortifications on Gibraltar

Gibraltar, prior to the Great Siege during the American Revolutionary War.
$700.00

This is a scarce, separately-issued c. 1770 Jean Lattré map of the town, port and peninsula of Gibraltar. This eastern-oriented map is richly detailed, showing the remarkable and forbidding topography of the peninsula and its fortifications. The map shows the positions held by the Spanish and the British during their long stalemate following the 1727 Spanish siege of Gibraltar. Lattré appears to have produced this map as a separate issue near the end of the Seven Years' War (1756 - 1763), coinciding with Spain's entrance to that conflict. Although the war ended without any action at Gibraltar, it would have been considered a possible theater of engagement.

State of the Map

This third state of the map we suspect to have been printed in the 1770s, following British modernization of the port's defenses. This state includes significant additional British fortification, and a 'Supplement' added to catalogue these changes. It may have been printed as late as Spain's 1779 declaration of war on Britain: since Spain's primary aim in entering that war was the recapture of Gibraltar, the update of this map would have been timely.

This map is rare, and it is not well catalogued. As a consequence of it being an undated, separately issued map, there is no clear agreement on its dating among institutional collections. The map was listed among the offerings of Lattré's shop in the catalogue accompanying his 1762 Atlas moderne, so an approximate date of 1762 is warranted for the first printing.

We have identified four states:There are only six examples of the map in OCLC: two of which are state 3, and one of which is state 4. (others undetermined). Not in OCLC, but in their online collections, are the state 1 at Cartographic i Geologic de Catalunya and the state 2 example at the Instituto Geographico Nacional. An edition by Treuttel et Wurtz was printed in Strasbourg, copied from the fourth state of the Lattré.

Jean Lattré (170x - 178x) was a Paris based bookseller, engraver, globe maker, calligrapher, and map publisher active in the mid to late 18th century. Lattré published a large corpus of maps, globes, and atlases in conjunction with a number of other important French cartographic figures, including Janvier, Zannoni, Bonne and Delamarche. He is also known to have worked with other European cartographers such as William Faden of London and the Italian cartographer Santini. Map piracy and copyright violations were common in 18th century France. Paris court records indicate that Lattré brought charges against several other period map publishers, including fellow Frenchman Desnos and the Italian map engraver Zannoni, both of whom he accused of copying his work. Lattré likes trained his wife Madame Lattré (né Vérard), as an engraver, as a late 18th century trade card promotes the world of 'Lattré et son Epouse.' Lattré's offices and bookshop were located at 20 rue St. Jaques, Paris, France. Later in life he relocated to Bordeaux. Learn More...

Very good. Dissected and laid down on original linen as issued. Original hand color. Minor soiling; some fraying of linen at a juncture of folds, else excellent.