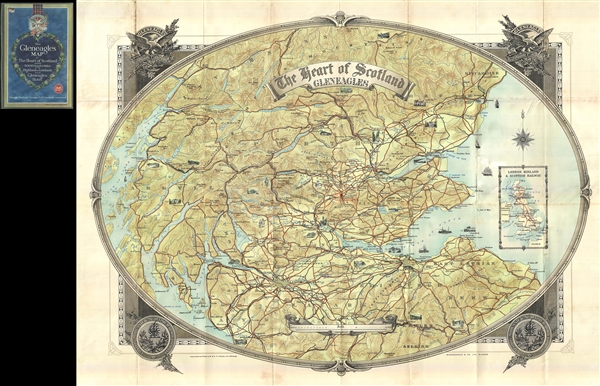 A curious notes references the 'Probable Route Take by Dave Balfour in R.L. Stevenson's Kidnapped. This refers to Robert Louis Stevenson's popular novel, Kidnapped. A historical adventure novel, Kidnapped was based upon real events and was enormously popular in Scotland for its sympathetic perspective on Scottish Highlanders. Kidnapped. Kidnapped focuses on a series of 18th-century Scottish events, notably the 'Appin Murder,' which occurred near Ballachulish in 1752 in the aftermath of the Jacobite Rising of 1745. Many of the characters were real people, including one of the principals, Alan Breck Stewart.

This map was drawn and engraved by McCorquodale and Company of Glasgow and published by W. and A. K. Johnston and Company of Edinburgh. The Gleneagles Hotel, a lavish luxury resort between Perth and Edinburgh, still operates today. The London Midland and Scottish Railway Company was nationalized in 1948 by the Tranport Act of 1947 and is not part of British Railways.

Very good. Minor wear on original fold lines. Backed on original linen. Detached from but accompanied by original binder, as in photo.