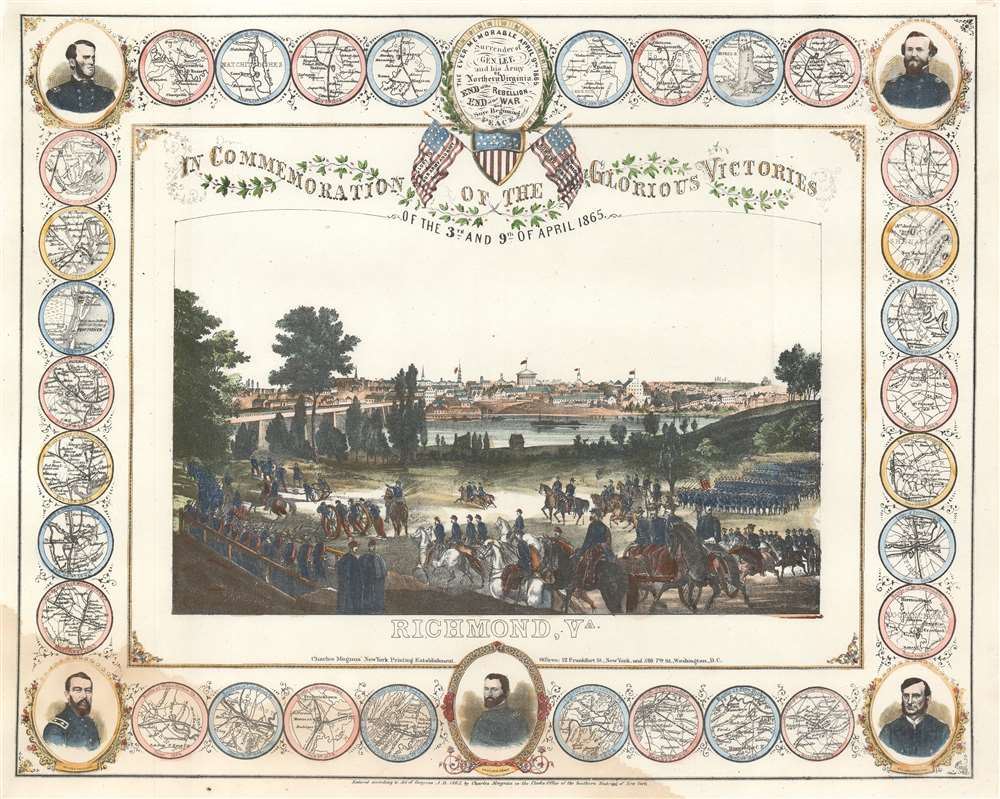 Features a central view of the captured Confederate capital of Richmond and maps of thirty Civil War battles.

This is an 1865 Charles Magnus view of Richmond, Virginia at the end the American Civil War. The view commemorates the Union occupation of Richmond, the Confederate capital, on April 3, 1865 and the subsequent surrender of Confederate General Robert E. Lee to Union General Ulysses S. Grant on April 9. Richmond is illustrated as seen from the south bank of the James River with the Confederate capital building prominently illustrated. The Union Army appears in the foreground. Soldiers are shown marching in formation while officers and cavalrymen ride on horseback. A handful of cannons are included on the left.

The whole is framed by a series of medallions illustrating Civil War battles and five portraits of Union generals. Lieutenant General Ulysses S. Grant, commander of all Union forces at the end of the war, is prominently featured at bottom center. To his left is Major General Philip Sheridan and to his right, Major General Hugh Kilpatrick. A portrait of Major General William Tecumseh Sherman, known for capturing Atlanta and his March to the Sea, occupies the top left corner while a portrait of Major General George Henry Thomas is situated in the upper right. Between these illustrious commanders are thirty smaller circular medallions highlighting various engagements of the war, including the Capture of Atlanta, the Battle of Five Forks, the siege at Petersburg, Virginia, the Battle of Cold Harbor, the Battle of Spotsylvania Court House, and the surrender at Appomattox.

This view was created by Charles Magnus and published in 1865. The OCLC records five examples in institutional collections at the Library of Congress, the Lincoln Memorial University Library, Duke, the Boston Athenaeum, and the William Clements Library at the University of Michigan.

Good. Soiling along bottom. Closed margin tear professionally repaired on verso. Blank on verso.
Looking for a high-resolution scan of this?