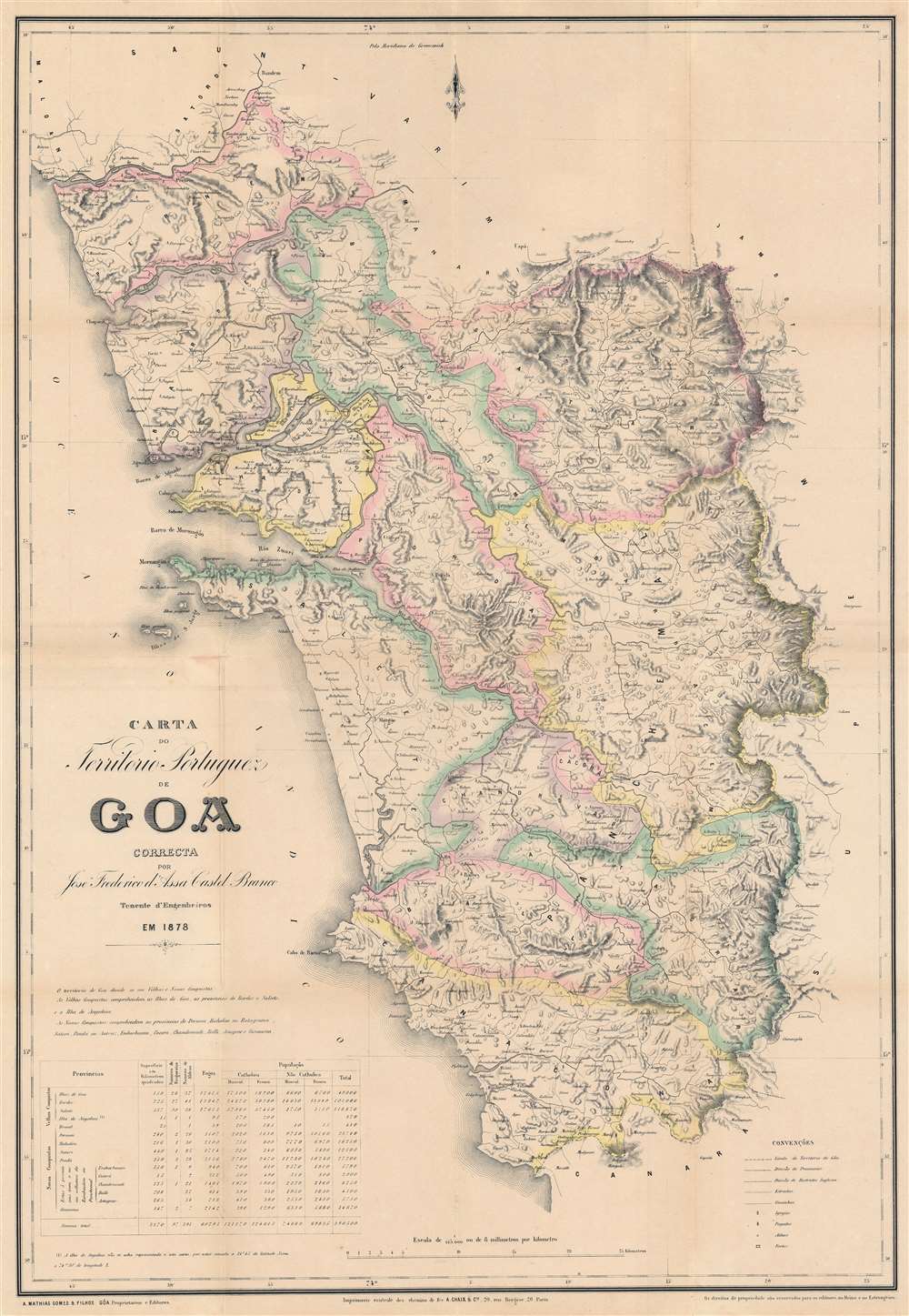 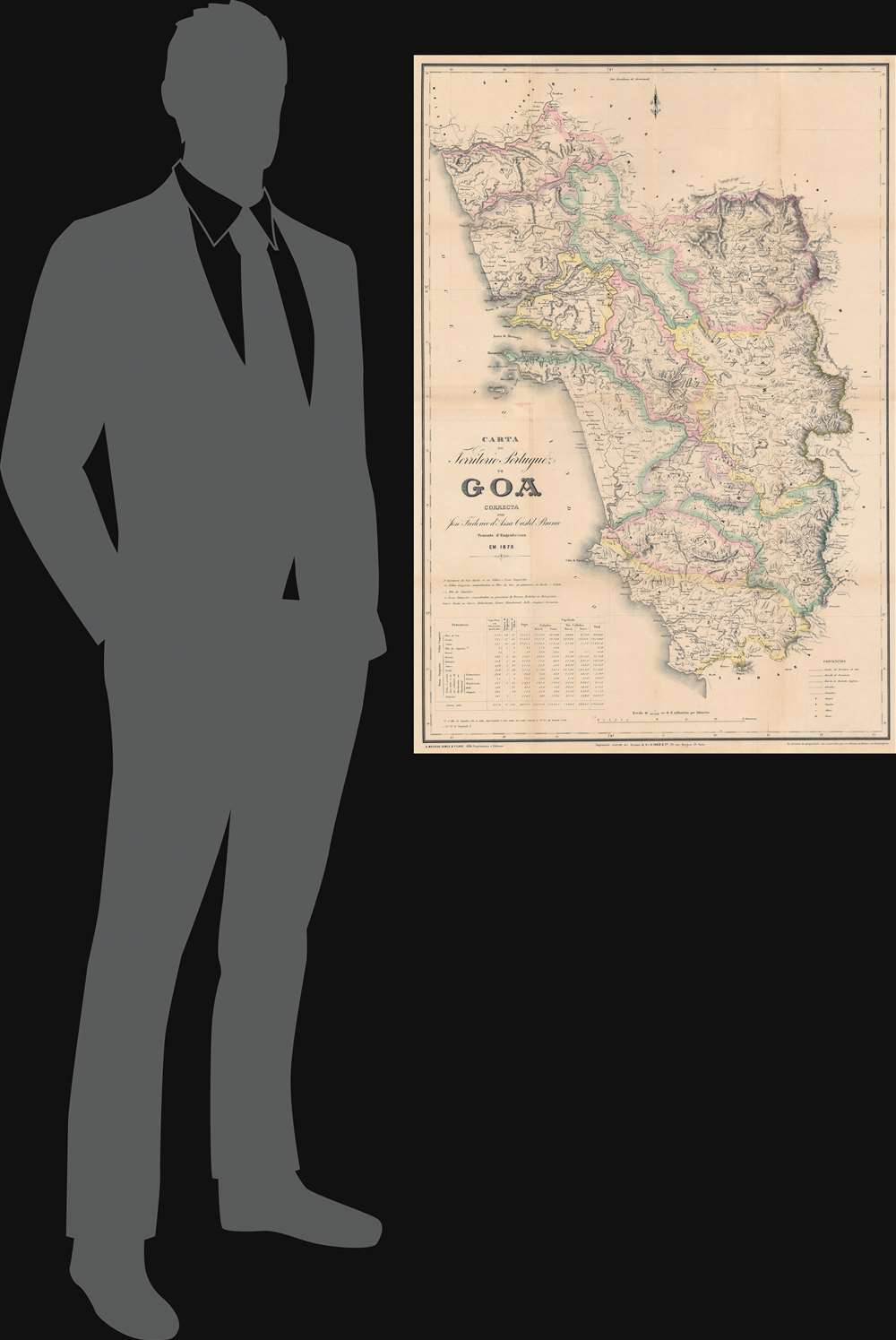 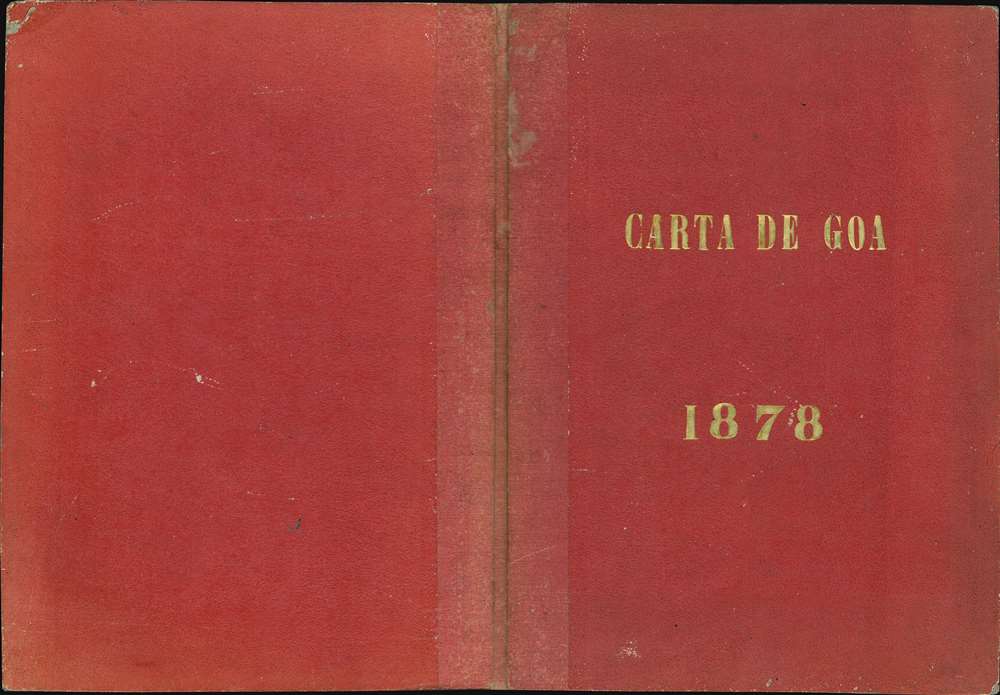 This is impressive large-scale 1878 first-edition map of Goa by Goa-born military engineer José Frederico d'Assa Castel-Branco. It represents a revolution in the cartographic knowledge of Goa and the finest trigonometrical map of Goa to appear in the 19th century, made in response to the signing of the Anglo-Portuguese Treaty of 1878, a major economic treaty that saw massive infrastructure development and the revitalization of the Goan economy after nearly 100 years of isolation and stagnation.

This map follows closely on the Anglo-Portuguese Treaty of 1878. The commercial treaty was designed to alleviate nearly a century of Goan economic stagnation - largely resulting from local bureaucratic inefficiencies, trade isolation, and the general decline of Portuguese commercial and imperial might. According to the agreement, the British Raj would finance a series of major infrastructure projects in Goa in exchange for vast trade concessions and a salt monopoly.

The cornerstone of the project was the development of the natural harbor of Mormugâo in to a major modern shipping hub connected to British India via a new railroad, the West of India Portuguese Railway (Mormugâo Railroad). The British would thus gain a new port connecting its colonies in Deccan to an easy-access global port, and the Goans would benefit from increased mobility, taxes, and general trade.

This map represents preliminary work following the treaty to establish a general triangulation for the colony and act as a baseline for any further infrastructure development. Subsequent editions followed, we are aware of at least one later edition issued in 1890 following the 1887 inauguration of the completed Mormugâo Railroad - Port link.

This map was drawn by José Frederico d'Assa Castel-Branco in 1878 - representing the first edition. It was commissioned in Goa by A. Mathais Gomes and Filhos, and published in Paris by A. Chaix. The map is today quite scarce. At least one latter edition was issued in 1890 with significant updates. We note institutional holding at the British Library, New York University, Bibliothèque interuniversitaire de la Sorbonne, Bibliothèque nationale de France, Universiteitsbibliotheek Leiden, Biblioteca Nacional de Portugal, and Staatsbibliothek zu Berlin. We see one example each of the 1878 and 1890 editions in trade history.

José Frederico d'Assa Castel-Branco (March 5, 1836 - March 5, 1912) was a Goa-born Portuguese military engineer active in Goa in the late 19th century. From 1850 he studied at the Escola Mathemática e Militar de Goa in 1850, after which he joined the Goan-Portuguese Army. Roughly 10 years later, around 1860, his skill as an engineer saw him assigned to the State Engineering Department of Portuguese India. He work transition from Military to Civil engineering. Following the Anglo-Portuguese Treaty of 1878 he began compiling his surveys and the work of others into a large and impressive map of Goa - the finest yet produced. In 1879 he became the Vice-Director of Public Works and Deputy Director of the State Engineers. In 1887, he began teaching engineering at the Escola Profissional e no Liceu de Goa. 1888 saw him promoted to Director General of Public Works of Portuguese India. He retired as a General in 1901, but remained active in the Office of Public Works until about 1905. Learn More...


Imprimerie Chaix (1845 - 1965) was a French publishing firm based at 20 Rue Bergère in Paris. They are best known for printing and publishing Belle Époque posters, including the celebrated Les Maîtres de l'Affiche. Les Maîtres de l'Affiche was a highly influential art publication featuring the Belle Époque commercial posters. Based upon a monthly subscription system, members received four prints each month over a five year period, resulting in 240 images along with 16 bonus images. Learn More...