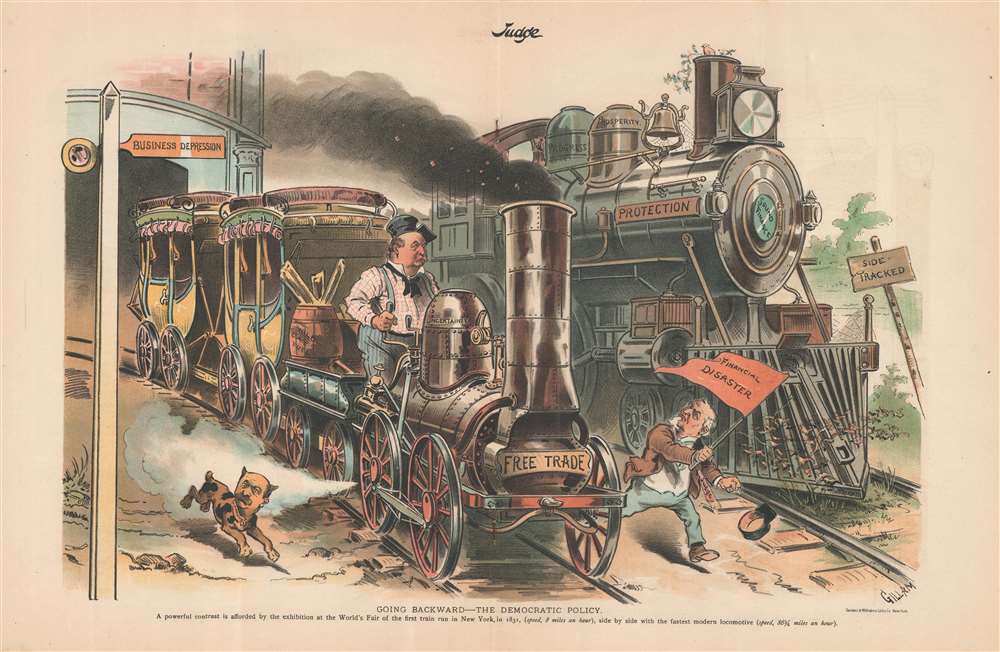 Criticizes President Cleveland and his slow response to economic depression.

Using the 1893 Chicago World's Fair as its setting, this 1893 Bernhard Gillam political cartoon blasts the government's slow and outdated response to the Panic of 1893, at that point, the worst economic disaster in American history. In many ways this cartoon is also pertinent to the current times, when we are once again facing record unemployment - this time due to a poor government response to the Covid-19 virus.

By appropriating two locomotives, the era's most recognizably advanced technology, Gillam accuses President Grover Cleveland and his Democratic administration of employing ancient practices to attack the financial disaster. Judge, personified as a railroad worker and holding the red flag, rushes to stop (one meaning of red flags on railroads is 'stop') Cleveland and his outdated locomotive. At that moment, the modern locomotive zooms past, decorated with Republican Party ideas for the response.

One of the causes of the Panic can be traced to foreign entities investing in Argentina, which had been encouraged by Baring Brothers, an Argentine bank. This era of plenty came to an end after the wheat crop failure in 1890 and a coup in Buenos Aires. These events made investors wary and pushed them to begin hoarding gold instead of paper money. This, in turn, led to bank runs, further deepening the financial panic.

President Cleveland's Response and the Effects of the Panic of 1893

President Cleveland, a member of the so-called 'Bourbon Democrats,' believed in sound economic policy, specifically in the importance of currency backed by gold. This belief caused him to disdain the then-popular Free Silver movement, which had forced the passage of the 1890 Sherman Silver Purchase Act. This law forced the U.S. government to buy excess silver, which artificially deflated the value of both silver and gold. It also allowed people to exchange silver certificates for gold, which caused a severe depletion of America's gold reserves during the Panic. Cleveland's major response to the Panic involved convincing Congress to repeal the Sherman Silver Purchase Act, which he believed was responsible for the Panic, and little else. Cleveland was blamed for the economic crisis, and the Democrats suffered the worst mid-term election defeat in American history in 1894. Another Democrat would not be elected president until 1910.

Unemployment skyrocketed, hitting twenty-five percent in Pennsylvania, thirty-five percent in New York, and forty-three percent in Michigan, with national unemployment estimated at somewhere between seventeen and nineteen percent. Fifteen thousand businesses closed, five hundred banks failed, and an unknown number of farms ceased to exist. Thousands of people became homeless when they were unable to pay their mortgages and communities organized soup kitchens to feed the hungry.

This cartoon was drawn by Bernhard Gillam and published by Judge in the May 20, 1893 edition.

Bernhard Gillam (April 28, 1856 - January 19, 1896) was an American political cartoonist. Born in Banbury, Oxfordshire, England, Gillam and his parents immigrated to the United States in 1866 and settled in New York City. He found a job as a copyist in a lawyer's office but soon became interested in engraving. Following the success of having a few cartoons printed in the New York Graphic, Gillam shifted to cartooning. Over the course of his career, his work was published in Frank Leslie's Illustrated Newspaper, Harper's Weekly, Puck magazine, and Judge magazine, where he became director-in-chief in 1886. Gillam's cartoons played a major role in Grover Cleveland's election to the presidency in 1884 when one of his most remembered cartoons depicted his opponent, James G. Blaine, covered in tattoos referencing corruption charges from his political past. Gillam died of typhoid fever in Canajoharie, New York, in 1896. Learn More...

Gillam, B. 'Going Backward - The Democratic Policy' Judge Vol. 24 No. 605, May 20, 1893. (New York: Judge Publishing Company).     Judge (1881 - 1947) was a weekly satirical magazine published in the United States. The first issue was first printed on October 29, 1881 and was only sixteen pages long. Judge was launched by James Albert Wales, Frank Tousey, and George H. Jessop, who had previously worked for its rival magazine Puck. In the mid-1880s, William J. Arkell purchased the magazine, which was having difficulty competing with Puck. Arkell, taking advantage of his considerable wealth, persuaded cartoonists Eugene Zimmermann and Bernhard Gillam to leave Puck and join the staff at Judge. As Arkell was a supporter of the Republican Party, Judge soon became a platform for criticizing the Democratic administration of Grover Cleveland, which was blamed for the Panic of 1893, among other issues. With support from the Republican Party, Judge saw a rise in popularity during the 1880s and 90s, surpassing Puck in both content and circulation. Judge also widely supported the candidacy of William McKinley, largely through the work of cartoonists Victor Gillam and Grant E. Hamilton. Judge reached its peak circulation of around 100,000 by 1912. One of its former editors, Harold Ross, used his experience at the magazine to launch his own publication, The New Yorker in 1925, which quickly began to compete with Judge. Due to the success of The New Yorker and the Great Depression, Judge became a monthly is 1932 and ceased circulation in 1947.

Good. Light wear along original centerfold. Text on verso.
Looking for a high-resolution scan of this?