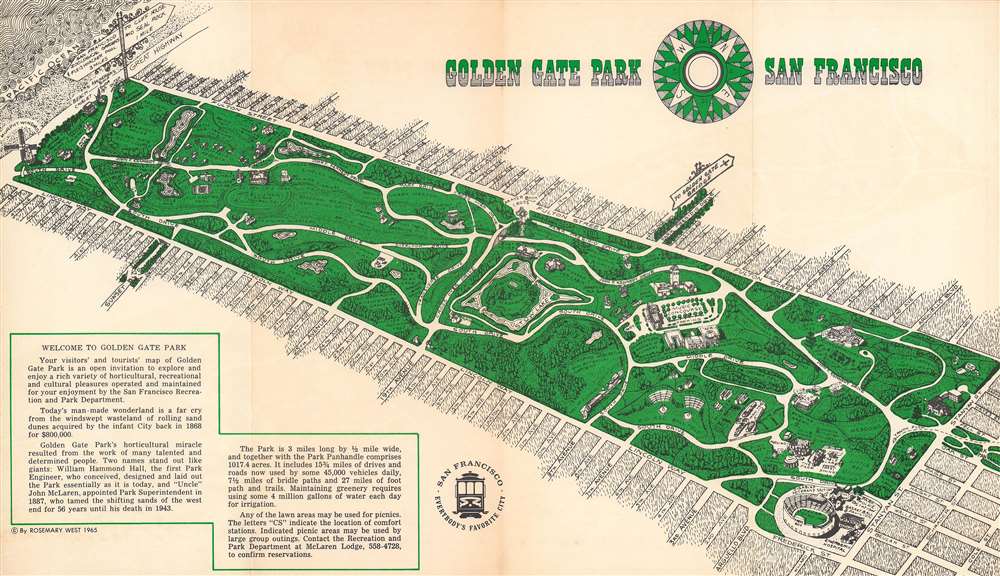 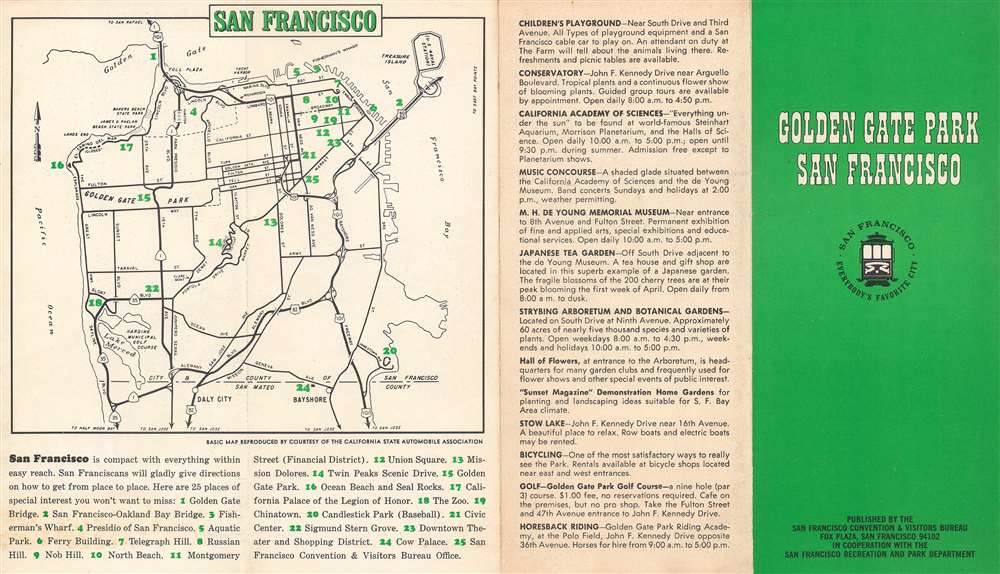 This is a lovely 1965 Rosemary West bird’s eye view of Golden Gate Park in San Francisco. It was published by the San Francisco Convention and Visitors Bureau on the eve of the explosion of the hippie movement, in which the park itself played an important role.

This view illustrates Golden Gate Park from the southeast looking towards the northwest and the Pacific Ocean to the back and left. The illustrations and accompanying text at bottom-left and on the verso (back) deal with the park’s history, main attractions, and amenities. The verso also includes an inset map of the entire city and the park’s location therein, along with other tourist attractions.

The Park and the Hippie Movement

This map was published just before the florescence of the hippie movement in San Francisco and the Summer of Love in 1967. As one the main areas for public congregations in the city, many of the key events preceding the Summer of Love took place in or near the park, including the Love Pageant Rally in October 1966 in the park’s panhandle (partly visible at right) to protest California’s banning of LSD (Lysergic acid diethylamide), and the ‘Human Be-In’ in January 1967, held at the park’s Polo Fields, towards left.

The lands that now form one of the great urban parks of the United States had inauspicious beginnings as a collection of sand dunes that were of little interest to the residents of the developed part of San Francisco further east. However, the efforts of Frederick Law Olmsted and other advocates of urban parks got the ball rolling on a process that would take decades and transform the landscape into one of lush forests and lakes. The famous windmills near the Pacific coast of the park were installed to pump water throughout the park to sustain the newly planted vegetation. The park served as a refuge for thousands of city residents who lost their homes in the 1906 Earthquake and resulting fires. It underwent substantial renovations in the 1930s through Works Progress Administration (WPA) projects, taking on the form it maintains today.

This view was drawn by Rosemary West and published by the San Francisco Convention and Visitors Bureau in 1965. The inset map on the verso was provided by the California State Automobile Association. We were unable to locate any biographical information or additional works by Rosemary West. We note that the OCLC lists seven institutions holding this view and it has no known history on the market. The view appears to have been reused for a brochure by the Convention and Visitors Bureau published in 1970.