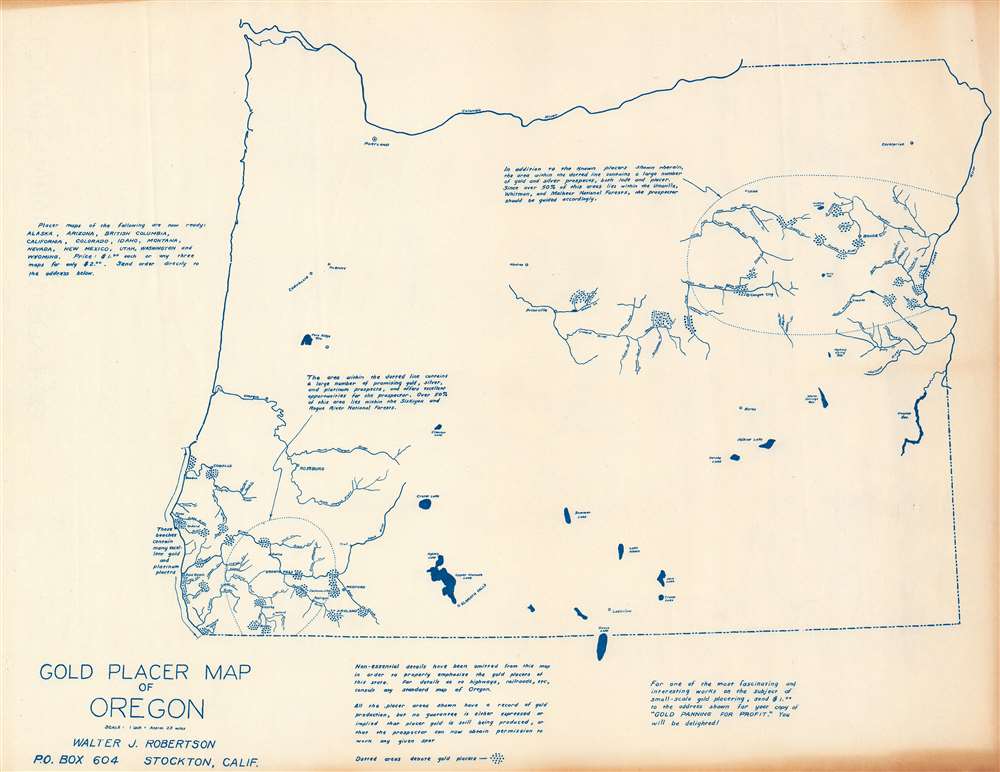 This is a c. 1956 Walter J. Robertson map of Oregon illustrating placer gold deposits. Dashed lines encircle the two principal gold districts: one in eastern Oregon and one in southwestern Oregon near the California border. Deposits are marked by clusters of blue dots. Rivers, creeks, and major cities and towns near these deposits are illustrated and labeled. Apart from these two regions, very little detail appears. Major lakes are depicted, including Crater Lake and Upper Klamath Lake. A few cities outside the gold-producing regions are noted, such as Portland, Albany, and Corvallis.

Gold was first discovered in Oregon in 1850. Fortune seekers rushed into Oregon, staking claims along the Rogue, Applegate, and Illinois Rivers. In 1861, gold was discovered in Baker County in eastern Oregon, sparking another rush. It took ten years for the placer gold deposits to be exhausted, which led to the implementation of lode mining. Gold mining in Oregon lasted through the mid-20th century but returns consistently diminished.

This map was created and published by Walter J. Robertson c. 1956. This is the only known cataloged example.

Walter James Robertson (October 2, 1910 - May 9, 1978) was an American publisher and cartographer. Born in Colorado, Robertson lived most of this life in Stockton, California. Beginning in the 1950s (or possibly earlier), Robertson began publishing materials dealing with mining, including a pamphlet titled 'Gold Panning for Profit'. He also published a series of placer mining maps of several western states, including Oregon, Arizona, and Northern and Southern California. Learn More...