1849 Ensign and Thayer Boradside Map of the California Gold Rush 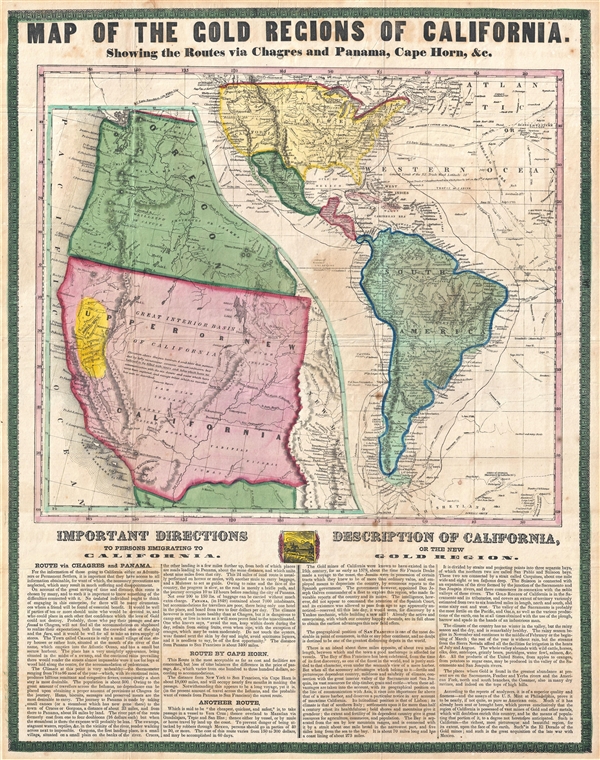 1849 Ensign and Thayer Boradside Map of the California Gold Rush

A rare and remarkable example of Ensign and Thayer's 1849 promotional broadside map illustrating routes to and from the California Gold Fields. 'Forty-Niners' traveling across the continent to California faced a daunting and dangerous voyage. Moreover, the California Gold Rush was exactly that, a rush, being, very much an 'early bird gets the worm' situation. Prospectors were keenly aware that the best gold lands were quickly being claimed and so had to balance dangers, time, and expense with the risk of missing out on the strike of a lifetime.

Ensign and Thayer's broadside map illustrates the three primary routes to California and offers copious original text and commentary on the voyage:Nonetheless, once the hopeful prospector and emigrant arrives, he is blessed for California is described as a veritable paradise,

The valley of the Sacramento is probably the most fertile on the Pacific, and GOLD, as well as the various productions of the earth, can be at all times obtained with the use of the plough, harrow and spade in the hands of an industrious man…. the region of California is possessed of vast mines of Gold and other metals, which will doubtless enrich this country, and be the means of populating that portion of it, to a degree not heretofore anticipated. Such is California—the richest, most picturesque and beautiful region, for its extent, upon the face of the earth. Such is the El Dorado of the Gold mines; and such is the great acquisition of the late war with Mexico.The document itself features two maps. A large map of North and South America detailing the possible routes to California, and a large inset map offering a detail of the California gold region. The large America map, in addition to offering three practical routes to the gold fields, also details the routes if important explorers such as Wilkes, Cook, Vancouver, Perouse, and others – no doubt an attempt to associate the prospective prospector with the great explorers of history. The large inset of the Gold Region, details all of Upper California and parts of Oregon according to the 1848 Treaty of Guadalupe Hidalgo. The gold fields of the Sacramento Valley themselves are highlighted in bright yellow – suggestive of the wealth to be found there.

This is some confusion regarding the source of this map. Wheat and others have noted that examples of this broadside are occasionally associated with copies of Thomas J. Farnham's Life, Adventures, and Travels in California, although it is unclear if the map was issued separately and attached to the book or actually published with the book. Another variant is known that features a larger, more decorative, border (Rumsey #3442). That edition bears the Ensign and Thayer imprint, which appears nowhere on the current edition. Both variants are undated, but an advertisement in the December 23, 1848 New York Tribune strongly suggests that it was published late that year.

An exceptional discovery and an important Gold Rush document.