1754 Bellin Map and Chart of the Gulf of Guinea 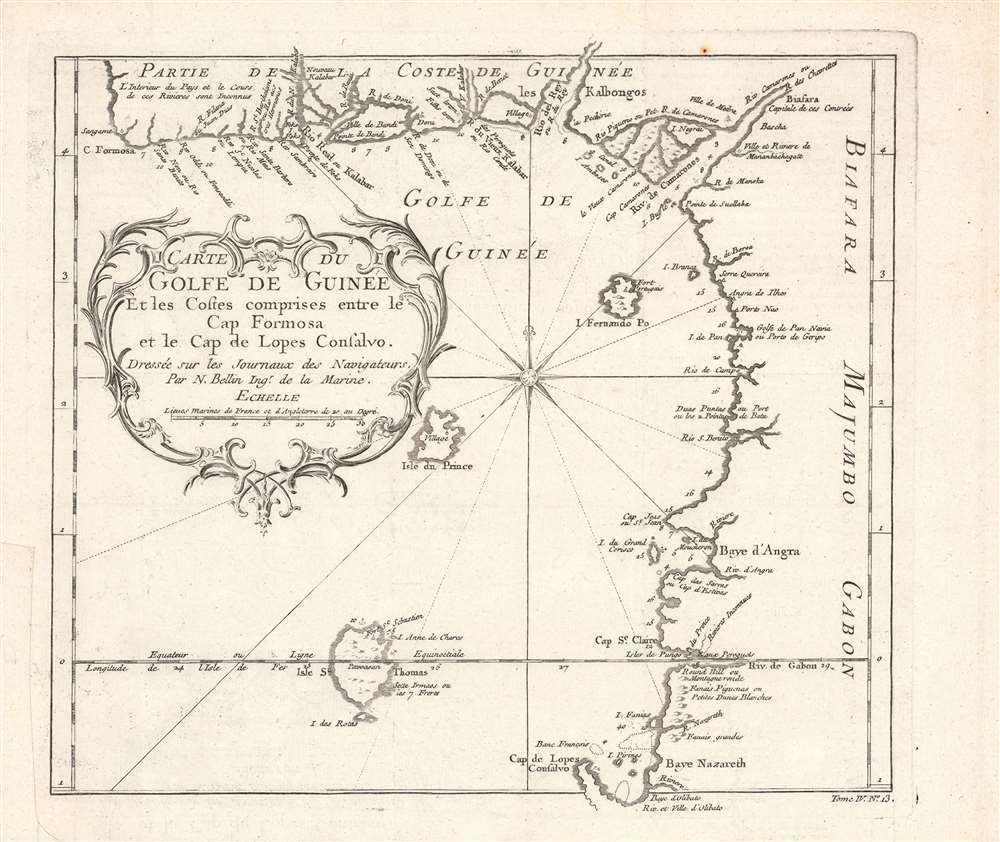 1754 Bellin Map and Chart of the Gulf of Guinea

This is a c. 1754 map and chart of the Gulf of Guinea by Jacques-Nicolas Bellin that appeared in the Abbé Prévost's Histoire Generale Des Voyages. It notes a range of maritime and terrestrial features, especially rivers flowing from the African interior into the gulf.

Coverage includes the Gulf of Guinea and the West African coast from the Niger River Delta, on 'Cape Formosa' in present day Nigeria, to Cape Lopez, in present-day Gabon, a stretch of coastline sometimes called the Bight of Biafra or the Bight of Bonny. Bioko Island, here as Fernando Po, is prominent at center towards top-right. The size of the islands of São Tomé and Príncipe are exaggerated, likely due to the islands' importance for trade and navigation. Soundings are provided along the coast and Bellin was especially diligent in noting the names of rivers flowing into the gulf, though he admits at top-left (the Niger River Delta) that 'the interior of this country and the course of these rivers are unknown.' Some coastal settlements, forts, and mountains are also noted.

The mid-late 18th century saw the height of the Transatlantic Slave Trade and the lands shown here were one of the main sources of slaves bound for the New World. For example, the banks of the Calabar (Kalabar) River at top became a major site for slave trading, as European traders, especially British traders, developed relationships with the Efik people based there. The majority of those captured as slaves and then passed on to European traders on the Calabar River and elsewhere along the Bight of Biafra were Igbo.

This map was made by Jacques-Nicolas Bellin and appeared as Plate No. 13 in Tome IV of the Abbé Prévost's Histoire Generale Des Voyages… As it is undated and the Histoire Generale Des Voyages… went through several editions, dating it is difficult. Regardless of date assigned at cataloging, the map is only listed independently among the holdings of the New York Public Library and the Bibliothèque nationale de France, while the Abbé Prévost's entire work (which may or may not include the map) is more widely distributed.

Very good. One spot of discoloration in top margin towards right. Crease in bottom-left margin. Uncolored.